Why Ethereum May Soon Breakout!

With so much occurring in Bitcoin, from its massive valuation leap to its multiple hardforks, investors have been distracted from considering Ethereum. Coincidentally, the last few months were quiet for the number-two ranked virtual currency, save for a few upside swings. After briefly exceeding $400 territory in mid-June, Ethereum appears to have faded into the background.

Adding pressure to the digital coin is the presence of hardforked cryptocurrencies. Bitcoin Cash was supposed to act as a competitor blockchain; however, both Bitcoin and Bitcoin Cash have enjoyed tremendously profitable success. During this time, Ethereum slipped from center stage, trading seemingly anonymously around the $300 level. However, looks can be deceiving, and in this case, it’d be a mistake to doubt Ethereum.

Cryptocurrencies in general face an ignorance challenge. Most people are confused about the blockchain, and almost half of Americans believe that Bitcoin ownership is legally questionable. But once the majority of the public understand the implications of cryptocurrencies, we could enjoy yet another massive bull cycle.

But among the top-ranked cryptocurrencies, Ethereum could be on the verge of something special. Here are three reasons why we should expect a breakout soon:

Take a quick look at the Ethereum price action over the past year, and one pattern becomes apparent — the bullish pennant formation. In mid-June, shares eclipsed $400. In early September, Ethereum hit just under $400. The next peak, in mid-October, took the digital coin a few dollars shy of $350. 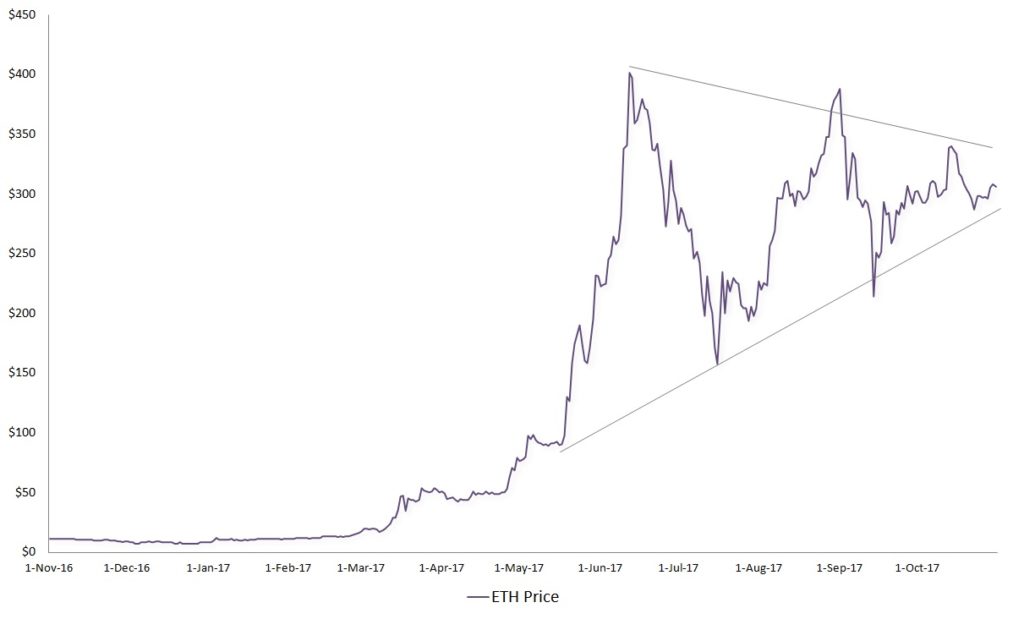 On the “downside,” however, we see rising support. In mid-July, Ethereum bottomed around $153. In mid-September, the price bottomed at $229. The most recent bottom occurred in the latter-half of October at $284. At some point, the bulls and bears will “finalize” their negotiations, probably to the upside.

Whenever the blockchain and cryptocurrencies are discussed, the most common occurrence is an explanation of the underlying technology. For Ethereum, proponents will mention the architecture’s “smart contract” capabilities, or that it’s scaled more efficiently than Bitcoin.

While true, none of it matters. The only thing that matters is speculation. The general public isn’t known for their vast intellectual resources; they just want to make money. When the blockchain becomes more heavily integrated, they’ll look to Ethereum as Bitcoin is too expensive. It’s really that simple.

Being number two amongst all cryptocurrencies provides a level of credibility that money simply can’t buy. Sure, there are thousands of blockchain assets available for investing; however, most people can easily determine that the vast majority of cryptocurrencies are questionable investments.

In sharp contrast, Ethereum is accepted virtually everywhere wherever Bitcoin is accepted. As cryptocurrencies rise, I believe we will see a flight to quality. Ethereum simply has the credibility and the confidence that other coins lack.