Ethereum: Buy Today and Sell in May?

In a break from delivering the latest news items in both the blockchain and traditional markets, I want to share my unique, technical perspective on the Ethereum price. Lately, Ethereum has come alive in the wake of Ripple’s substantial volatility, regaining the number two ranking among all cryptocurrencies by market capitalization. But what’s the best way to advantage this dynamic?

Before I begin my analysis, I want to clarify up front that the following should in no way be construed as investing or trading advice. Like any other study or forecast, I have no way of knowing if the implications of my analysis will pan out. At the same time, I want to arm Crush The Street readers with the best information possible.

With that caveat in mind, let’s take a look at my Ethereum sentiment chart: 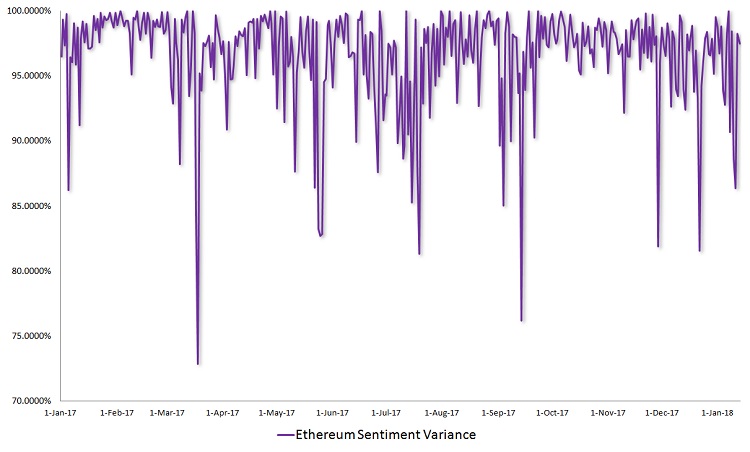 The most conspicuous observation I noticed about Ethereum sentiment is that it oscillates, similar to a seismograph. ETH traders tend to push prices higher, but then the bears gradually drag the price lower until a spike low in sentiment is reached. From there, bullish traders regain control, driving ETH to new plateaus.

Interestingly, over the trailing month, we’ve witnessed three spike lows in Ethereum sentiment, two of which were consecutive and of similar magnitude. That’s extraordinarily rare, which possibly indicates that Ethereum sentiment has hit rock bottom in the near and intermediate term.

If so, we could see a dramatic rise in ETH prices, up until the next time the bears take over the markets. Based on historical price trends, it’s possible that Ethereum could gradually keep rising — along with other cryptocurrencies — before correcting during the spring season.

Of course, with so much craziness in the blockchain, you should take this and any other analysis with a grain of salt. Nevertheless, it’s also a reminder that if you’re interested in Ethereum or other cryptocurrencies, waiting for the “perfect price” is a frustrating endeavor.

I remember telling a professional colleague of mine not to over-think Ethereum. At $360, I said that eventually, we’ll be looking at these prices as unbelievable bargains. How right my words were!