Is Ethereum Getting Primed for Another Leg Higher?

While bitcoin hogs most of the attention of the cryptocurrency markets, 2017 will go down as the year of ethereum. For a period lasting one year, ethereum traded in a frustrating consolidation range after it first secured double-digit dollar territory. But seemingly in a blink of an eye, the number-two cryptocurrency came into its own in March of this year.

From an average price of over $12 in the prior February, ethereum surged to unprecedented heights. In March, its average price jumped to nearly $35. The following month was even more phenomenal, with the average hitting a cool $50. By then, many analysts reasoned that the cryptocurrency was due for a pullback. Just a few months ago, ethereum was trading for about $7 a pop.

Yet the purple-colored currency would not sit still. May witnessed the average price rise to a breathtaking $126, while June lay claim to a remarkable $313. It was veritably a dream cryptocurrency, with an engine more robust than that of bitcoin.

But like they say about all good things, ethereum’s moment had to end, at least for now. The bitcoin competitor quickly dropped to $250, and has struggled to regain the $300 benchmark. At time of writing, the cryptocurrency stands at just under $270.

Is this the end of ethereum, or is it merely getting started? Compelling evidence suggests that the crypto bears will be mightily disappointed.

Stability Across the Digital Markets

When bitcoin first started gaining mainstream recognition, outsiders decried it for its intense volatility. Indeed, during the early days for bitcoin, you couldn’t tell if the cryptocurrency was about to gain 50% or lose it. The newness of the blockchain technology only added to potential investors’ fears.

But lately, the cryptocurrencies have become far more stable. It may not appear that way to the general public, probably due to the mainstream media bias that they absorb. Nevertheless, mathematically speaking, the intra-session volatility for most major digital markets has lessened considerably.

Not to be outdone by the stability game, ethereum’s intra-day volatility has also hit multi-month lows. Compared to May, July’s volatility for the month so far is down a whopping 52%! 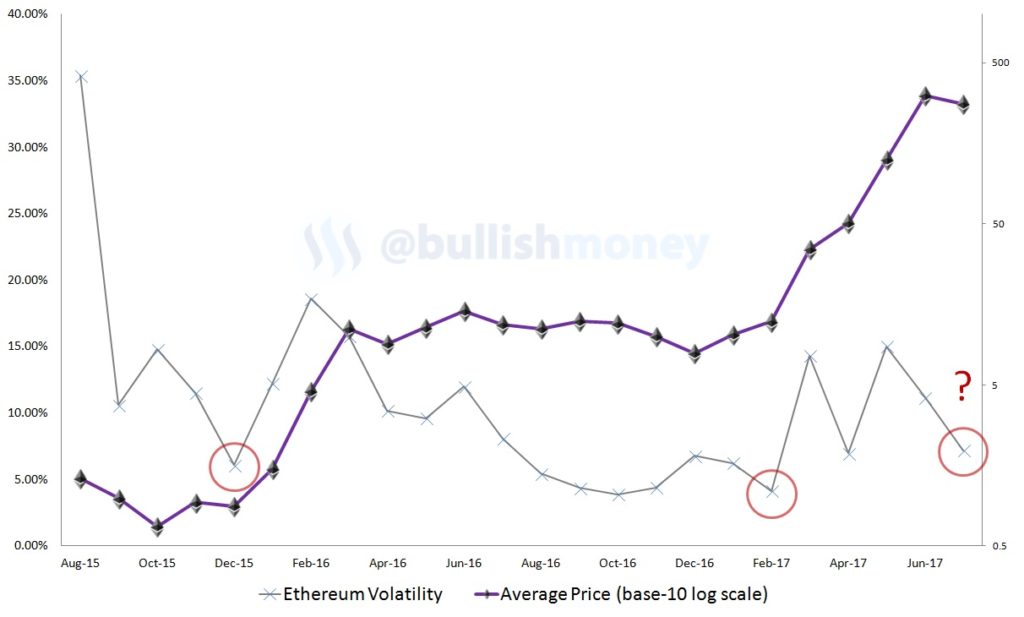 Why is this important? Because low relative volatility typically — but not always — indicates an imminent upside move. We saw this in December 2015, and February and April of this year. Typically, analysts witness large price moves in the cryptocurrency when there is a large magnitude drop of intra-session volatility.

For once, it’s not just bitcoin hogging up the spotlight for the cryptos. Other blockchain assets, such as litecoin and dash, as well as altcoins like the burgeoning steem currency, are making their mark on the broader public spectrum.

Because traditional investment vehicles such as benchmark-ETFs are traded near all-time record highs and are losing upside momentum, investors from all walks of life are seeking greater return potential. This is where the cryptos come into play.

Psychologically, bitcoin may be too pricey for newcomers. However, with the established reputation of ethereum, as well as its considerably lower price tag, the number two cryptocurrency could eventually make its way to the top.