Late last month, mainstream news channels focused heavily on Jussie Smollett. A gay African-American actor, Smollett reported to Chicago police that he was a victim of a hate crime. According to his testimony, “MAGA” hat wearing thugs assaulted Smollet. Rightfully, the media raged against racism. However, one small problem existed: it was all fake news.

At least, that’s where the evidence is headed. For his part, Smollett adamantly proclaims his innocence, recently stating that he feels “betrayed.” On January 29th, the actor – who plays a role in Fox’s “Empire” – reported to police that two men hurled racial and homophobic slurs at him. Later, they beat him and tied a noose around his neck.

Naturally, the accusation fed into the sensationalism that is today’s fake news industry. However, several issues never made sense. For one, no footage existed that covered this alleged attack. That’s unusual, considering that surveillance cameras cover several angles within metropolitan Chicago where the attack supposedly occurred.

Next, we have the issue about why racist and homophobic thugs attacked Smollett in the first place. Based on the latest demographic information, Chicago holds a relatively slim white majority, at 1.34 million whites. On the other hand, blacks are over 830,000 strong.

In other words, this is NOT the place to commit a hate crime. From the get-go, skeptics called this incident fake news. And while the liberals attacked such notion as further evidence of a racist America, the conservatives got the last laugh.

Unsurprisingly, the left-leaning mainstream media sided almost-aggressively with Smollett. If the accusations were true, this represented clear evidence that America had regressed to its racist past. It would also neatly support the liberals’ broader framework of the world.

One of Smollett’s biggest supporters, CNN’s Don Lemon, took things to another level. During an interview, Lemon texted Smollett daily to check up on him. Lemon stated:

So every day I say… ‘I know you think I’m annoying you, but I just want to know how you’re doing. And that you’re OK. And that if you need somebody you can talk to me because there’s not a lot of us out there. 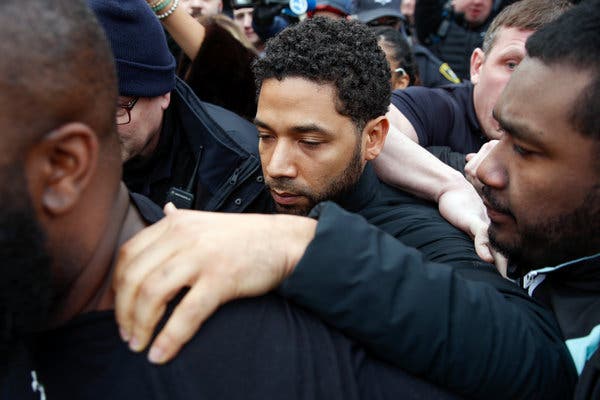 Again, if the allegations had merit, I would cite this as an example of solidarity within a historically marginalized group. But that only holds true, of course, if the victim provided an honest testimony.

However, Chicago PD, after reviewing the evidence as well as the two “racist” suspects, arrested Smollett. In relation to the charges of filing a false police report, law enforcement suspects that Smollett arranged the entire incident. And for what, you may ask? Because Smollett felt underpaid.

The whole concept is outrageous. Smollett could have sparked serious racial divisions during a highly contentious time. Even more critical, his selfish crime casts true cases of racism and discrimination under a cloud of skepticism.

But most maddening is that the actor’s initial supporters have failed to offer a full, unqualified apology. Case in point is ABC’s Robin Roberts. She gave a softball interview to Smollett. Later, she covered herself by saying that there’s “anger on so many sides.”

So many sides? The only ones who should be angry are Trump supporters, who were falsely accused of a hate crime. But that’s fake news for you.