Even The Fed Believes In Bitcoin

In a story that broke in January, a Federal Reserve Board of Directors employee was fined for mining Bitcoin on a server owned by the central bank. Nicholas Berthaume, was a communications analyst for the board. He pled guilty to one count of unlawful conversion of government property, a misdemeanor.  Berthaume, according to court documents, was mining Bitcoin on the Fed server for 2 years between 2012 and 2014.  Fed board Inspector General Mark Bialek stated, “Berthaume modified certain security safeguards so that he could remotely access the server from home. When confronted about these actions, Berthaume initially denied any knowledge of the wrongdoing. Later, however, Berthaume remotely deleted the software that he had installed in an effort to conceal his actions.” The amount of Bitcoin mined was not known, but I would imagine that the $5,000 fine was nothing compared to it.  I guess the Bitcoin craze caught on so much that the private central bank’s own employee couldn’t resist it.

Recently, another government employee was caught mining Bitcoin in New York. The New York City Conflicts of Interest Board has drafted disciplinary action against Vladimir Ilyayev, an employee of the city’s Department of Education. Public records show that Vladimir installed mining software that ran at night on his work computer and monitored its progress from his home.  He stated, “I ran Bitcoin mining software on my work computer from 6 p.m. until 6 a.m. every night from March 19th, 2014 until April 17th, 2014 when my Bitcoin mining software was shut down by the Department of Education’s Division of Instructional and Information Technology.” Ilyayev was fired for violating the city’s statutes and was forced to pay $611 in fines. I’d say $611 was well worth the return of mining Bitcoin.

All of this comes as the credibility of central banks across the world continues to be questioned. There are constant inflation target misses, as indicated by the Personal Consumption Expenditure Price Index.  This measures the price of goods and services, excluding the price of food and energy. Fed officials use this indicator to monitor their 2% inflation target. In this graph below, you can see that June hit 1.5% and the core rate is stagnating.  They utilize this metric in order to raise rates.  I suspect they are done this year.

Ex-Fed Chair Alan Greenspan commented this week that bonds are in a bubble and stagflation is being seen that hasn’t been seen since the 1970s. During this time, gold moved from $200/oz. to over $800/oz. in 1980. Maybe the message from Janet Yellen at the Financial Services Testimony is to buy Bitcoin or dollar alternatives? 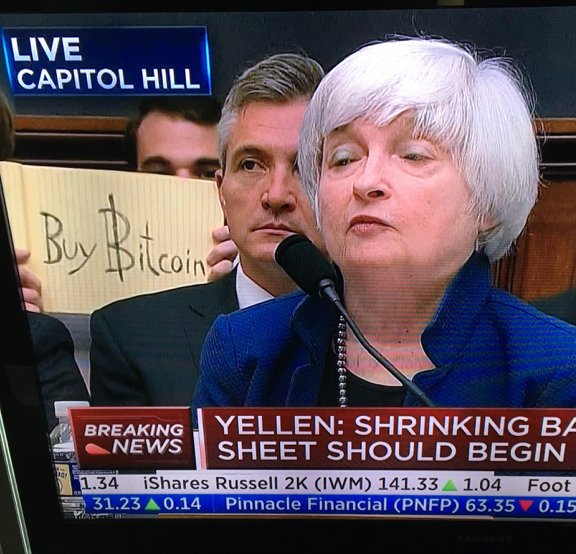 If you believe that the dollar will stand a lot longer then you are ignoring history.  I suspect more and more QE is coming, as the Fed has no way to normalize the balance sheet.  At this point in history, the rules of the game are rewritten, and I suspect we are on the verge once again.