Forget Interest Rates — Housing Could Be The Next Bank Crisis

Here’s a scary thought: according to InvestorPlace contributor Joseph Hargett, nobody is shorting Bank of America stock. In his words, “short sellers simply do not have Bank of America on their radar.” Which is awfully weird because the last time I checked, the markets were a forum for buyers and sellers. One segment can’t exist without the other.

This unusual — and I would argue dangerous — dynamic harkens back to the housing crisis that eventually led to the 2008 global financial collapse. During the heat of the sub-prime mortgage debacle, almost every real estate agent and broker was hawking their services. From their now myopic view, housing prices could go nowhere but up.

That left open an important question — at what price was too much? In order for the housing market to continue its prolific rise, somebody had to sell. But at a certain point, nobody would be able to afford the inflated valuations.

This logic ultimately tumbled the markets like a house of cards. In the midst of our collective reality check, we swore that we would no longer make the same mistake. Indeed, new government oversights would ensure that it would never happen again.

The only problem? It’s happening again.

It’s remarkable that few analysts are putting two and two together. As Hargett noted, nobody is short Bank of America. That means at the very worst, traders are neutral on it, and more than likely, they are different degrees of bullish. As opportunist as traders are, does no one want to take the opposite side of the transaction?

Look at the 10-year Treasury yield, which heavily plays into benchmark interest rates. They moved higher once Donald Trump won the election, but in 2017, they’ve been stymied by upside resistance. A correlation exists between the pensiveness of banks, and the declining trend in interest rates. In other words, wherever interest rates go, so to goes the banks. 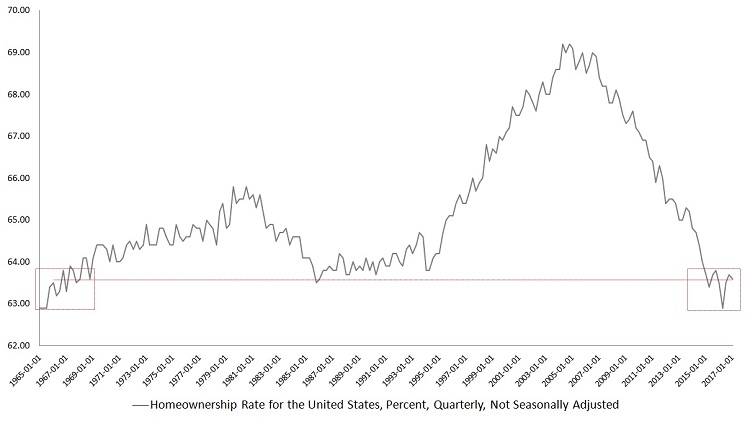 But beyond that is the housing market. We can talk all day about month-over-month, or other ultimately arbitrary time frames. But when you look at the long-term data of U.S. home ownership, I don’t see where you can find encouragement. Ownership rates are near historic lows. You’d have to travel back to the 1960s — when there were fewer people in this country — to see such continuously depressed levels.

Interest rates therefore have to move lower to mitigate this problem. Otherwise, you make it difficult for people purchasing their first home. But doing that would mean the de facto return of quantitative easing, and an inflationary environment.

It also wouldn’t do anything to cool down the housing market. Just in my neighborhood, real estate prices have nearly doubled in seven years. That sent the rental market sky high. Honestly, it’s a wonder how Americans are able to live on a day-to-day basis when so much of the average paycheck goes into paying rent.

Conservatives have always blasted the liberal economic policies of the prior Obama administration. As it’s turning out, they may have been gentle. This is one of the worst conditions that we’ve ever seen. A cripplingly strong dollar, overinflated housing, and interest rates that are about to nosedive yet again.

Again, the scary thing is no one is really saying much of anything.