Forget Stocks, Cryptos: The Real Issue is the Bond Market!

One of the two defining headlines in the financial markets is that Wall Street finally appears to be gaining traction. Part of that is due to President Trump making headway with key geopolitical issues. The other major headline is that cryptocurrencies have finally demonstrated signs of life.

But lost in these detracting stories is a critical situation, one that is rarely seen, if ever, in the modern era. To put it bluntly, the bond market is undergoing a massive paradigm shift. By mid-week, the Treasury yield for the 30-year note dipped to 3.06%, a fairly low figure. But what is particularly concerning is that the benchmark 10-year note is yielding 2.87%.

In other words, the risk for holding a 30-year bond to maturity produces only a 6.6% reward premium than holding a 10-year note. I would argue that right now, there’s no economic sense in accepting a 200% time risk for less than 7% reward premium. But definitely, if these trends continue, it would be completely irrational to purchase the longer-term Treasury yield. 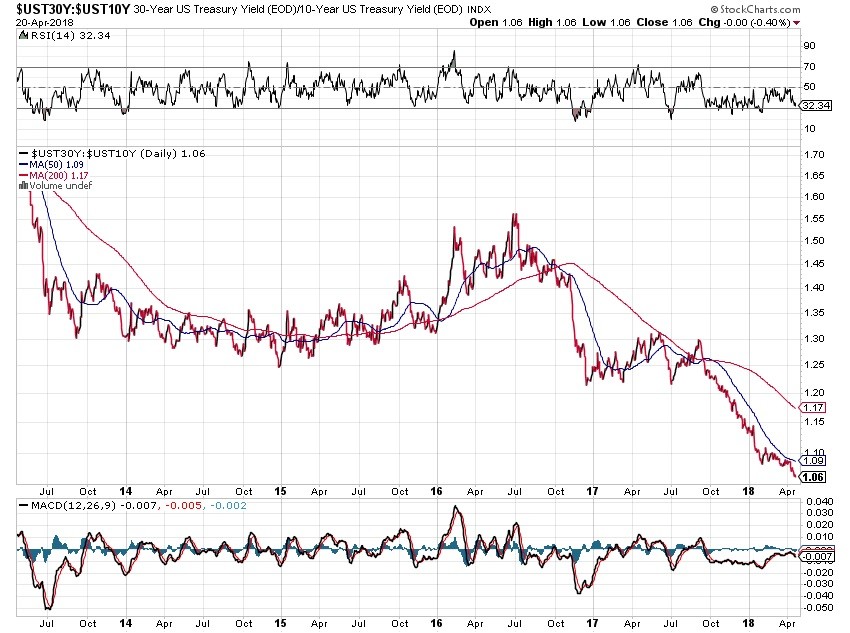 And from present observations, the trend is worsening. To end this week, the 10-year Treasury yield jumped to 2.96%, whereas the 30-year note increased to 3.14. At this juncture, the reward has dipped to slightly less than 6.1%.

The way the bond market is moving, I wouldn’t be surprised to see the ratio fall to a 1:1 ratio!

Quite frankly, this dynamic is unprecedented during a period of supposed economic recovery. What the bond market is communicating is that astute investors simply do not trust the U.S. government on any long-term basis. If they did, the premium (or demand) on the 30-year Treasury yield will be substantially higher.

Just back in the beginning of September last year, the 30-year premium was 30%. But in a matter of months, the bond market evaporated this reward by a magnitude of -80%! If you were looking for stability in this global economy, the U.S. is not that place.

Of course, the institutions that back Wall Street don’t want you to pay attention to the bond market. They will pump all kinds of information about equities, or even cryptocurrencies, to detract you from the very real evidence that our economy is failing. Again, if we had a normal economy, we would see investors being rewarded for taking on more time-risk.

And time is ultimately the problem. After years of exotic, experimental quantitative easing protocols, we don’t know our left from our right. Sadly, I don’t think any of the so-called experts have a solution to this silent crisis, which continues to hurt us unabated.