Despite Fresh Records, Markets are Signaling an Economic Crisis

The U.S. financial markets couldn’t offer a bigger picture of contrasts. Despite two major incidents of international terrorism in western Europe, Russia threatening to shoot down our fighter jets in an escalating Syrian conflict, and homegrown political radicalism against conservative principles, both the S&P 500 and the Dow Jones Industrial Average shrugged off these concerns to all-time record highs.

The source of the turnaround is the recently embattled consumer technology sector. Big names like Apple Inc. faced questions about their future retail dominance. This came in light of a Bloomberg report, which indicated that the upcoming iPhone operates slower than competitor models. However, many investors believe that the selloff has gotten ahead of itself, and therefore, they took advantage of depressed valuations.

Although there’s no denying today’s enthusiasm, it’s way too early to declare this rally as being a decisive victory for the long-in-the-tooth bull market. Taken as a whole, it appears we should be headed towards an economic crisis or at least a market collapse. Let’s take a look at three worrying counterarguments:

As I argued in my interview with Crush The Street, the consumer technology sector faces massive consolidation. Too many players exist in the sector, and there’s not enough demand to satisfy growth expectations for everyone.

We also have to worry about the failure of Moore’s Law, or the capping of capacity increases for semiconductors. At a certain point, we can no longer make a digital device smaller without the endeavor becoming cost prohibitive. This will create a bottleneck where hundreds of companies offer products that are virtually identical with each other.

To get around this problem requires mergers and acquisitions. The industry can’t handle the excess fat as it is now, so enjoy the rally while it lasts…it may not look like this for much longer!

It’s often said that bubbles form when everybody shows reckless abandon and starts buying into the markets. When you look at variance data of either the Dow Jones or the S&P 500, it’s difficult not to come to the conclusion that we’re headed towards another corrective cycle. 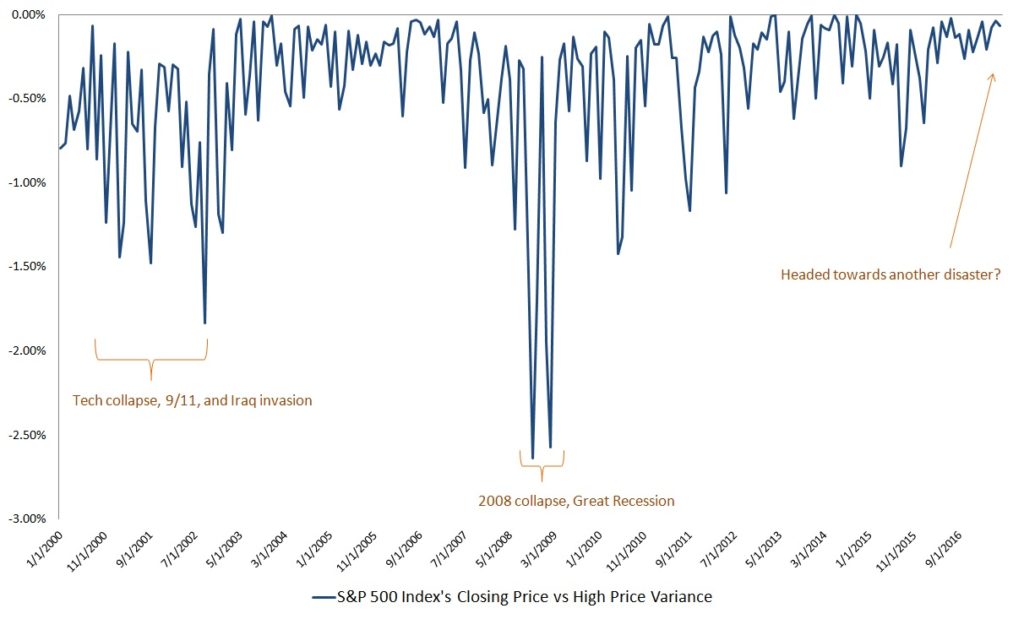 Specifically, I’m concerned about the benchmark indices’ variance between their closing price and their peak price. Ideally, you’d like to see a healthy balance between the high and close — this suggests further room for upside development. But recently, the markets have flashed high-close variance of less than half-a-percent! Presently, there’s almost no variance between the optimists and the “regular Joes.”

That’s a problem because many other market collapse incidents were signaled by a lack of this variance. In other words, too many people are optimistic about the Dow Jones, and we’re not sure why.

The World is in Crisis

I’m not sure how anyone can come to the conclusion that we’re not facing a critical, unprecedented juncture in human history. We have rampant terrorism exploding all over the planet, while two superpowers are desperately close to sparking a physical confrontation for the first time.

Typically, most people who sound the alarm of economic crisis are immediately labeled as alarmists. However, economic crisis may be the least of our worries. Should terrorism continue to impact western nations, the concept of executive mandates and martial law will become normalized. We already see widespread surrender of civil liberties in the U.K. on the pretext of safety and security.

These events, one way or another, will impact the traditional financial markets, and therefore, the idea of a market collapse is not out of the question. The more productive inquiry is to ask whether your assets are agile and diversified enough to handle such a dynamic environment.