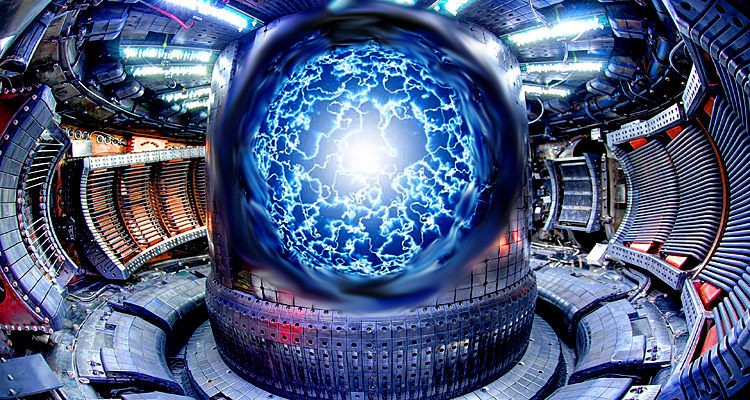 Seasoned investors and traders always seek out the latest and greatest opportunities on the horizon vs. immediate gratification from trading existing stocks and assets in financial markets. Just as hydrogen technology (Twitter thread) and commercial supersonic air travel (thread) fall into a watchlist category that requires patience for the industries to mature and publicly-traded companies to emerge, so is the field of nuclear fusion technology for 100% clean and plentiful energy that made global headlines last week. Conventional nuclear fission creates highly radioactive waste that can fall into nefarious hands, but nuclear fusion eliminates the risk of deadly emissions and catastrophic nuclear disasters that occurred at Chernobyl in 1986 and Fukushima in 2011. Fusion should placate activists who support renewables like solar, wind, and zero-carbon energy sources but oppose nuclear power.

With historic explosion, a long sought fusion breakthrough… “More energy out than in. For 7 decades, fusion scientists have chased this elusive goal, known as energy gain. At 1 a.m. on 5 December, researchers at the National Ignition Facility (NIF) in California finally did it, focusing 2.05 megajoules of laser light onto a tiny capsule of fusion fuel and sparking an explosion that produced 3.15 MJ of energy—the equivalent of about three sticks of dynamite… Now that NIF has cracked the nut, researchers hope laser fusion will gain credibility and more funding may flow.” – Science, Dec. 2022

Fusion projects are trying to avoid the loss of energy issue from fusion by applying technologies like lasers, magnets, and compression. It’s still unclear which technology will eventually be the most viable. Since 2021, over $3.5 billion flowed into startups for private research and development (R&D) compared to $2 billion over the previous decade, and there are aspirations to bring commercial-grade reactors online within a decade. In September, the U.S. announced it is increasing its support for additional R&D with a $50 million program. 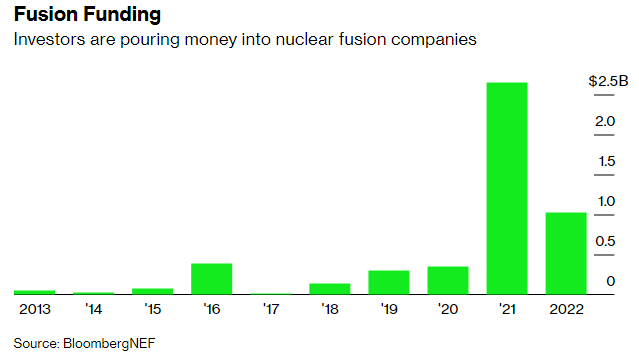 The Fusion Industry Association (FIA) said more than 93% of companies that responded to a survey believe that fusion power will be feeding electricity into power grids by the 2030s. The FIA has wasted no time in promoting and partnering with major banks like Citibank, which hosted the 2022 Fusion Executive Summit in NYC this fall.

There are currently no publicly-traded companies that focus on fusion R&D, but Bloomberg’s Global Nuclear Theme Peers index tracks 64 companies, and many have exposure to nuclear fusion research. Over the last five years, the index advanced nearly 100% vs. the MSCI World Index at 38%. 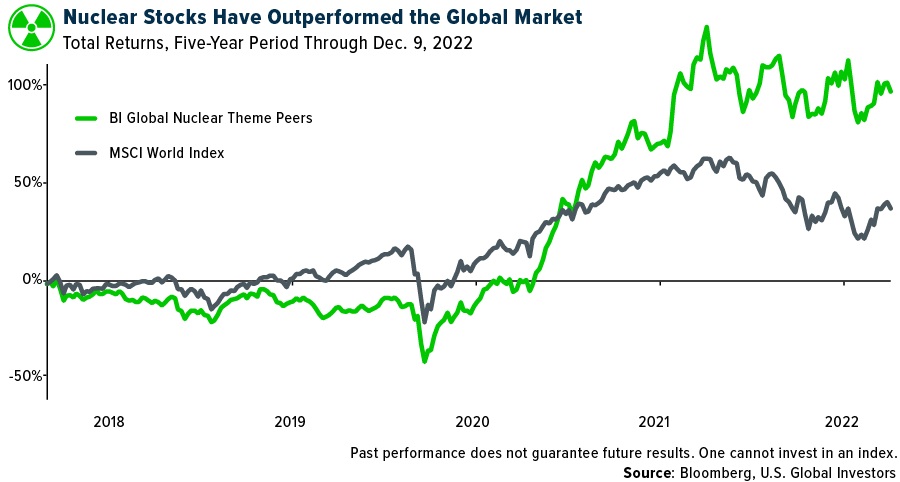 Here is a brief overview of a few major players in the field:

“Among the largest is Commonwealth Fusion Systems, or CFS, which spun out of MIT’s Plasma Science and Fusion Center in 2018. The company raised $1.8 billion in December 2021, on top of the $250 million it had raised previously. Its investors include Bill Gates and Google, along with oil companies, venture capital firms and sovereign wealth funds. CFS claims to have the fastest, lowest cost solution to commercial fusion energy and is in the process of building a prototype that is set to demonstrate net energy gain by 2025… Another major player is TAE Technologies. Located in California, the company has raised a total of $1.2 billion as of December 2022, from investors such as the late Paul Allen, Goldman Sachs, Google and the family office of Charles Schwab. TAE says it is developing a fusion reactor, scheduled to be unveiled in the early 2030s, that will generate electricity from a proton-boron reaction at an incredible temperature of 1 billion degrees… Other contenders in the field include Washington State-based Helion Energy, Canada’s General Fusion and the United Kingdom’s Tokamak Energy. In February 2022, Tokamak broke a longstanding record by generating 59 megajoules of energy, the highest sustained energy pulse ever.” – U.S. Global Investors 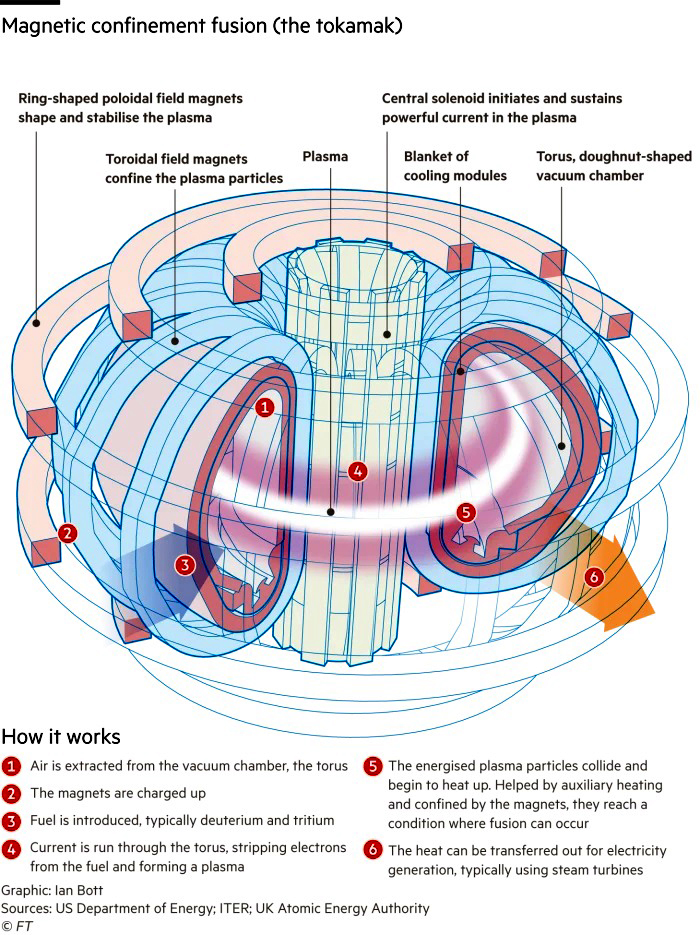 In case you missed it, China’s Experimental Advanced Superconducting Tokamak (EAST) nuclear fusion reactor set a world record earlier this year after superheating a loop of plasma to temperatures hotter than the sun for over 17 minutes.

China’s $1 trillion ‘artificial sun’ fusion reactor just got five times hotter than the sun… “The Chinese experimental nuclear fusion reactor smashed the previous record, set by France’s Tore Supra tokamak in 2003, where plasma in a coiling loop remained at similar temperatures for 390 seconds. EAST had previously set another record in May 2021 by running for 101 seconds at an unprecedented 216 million F (120 million C). The core of the actual sun, by contrast, reaches temperatures of around 27 million F (15 million C)… An even bigger fusion project, the International Thermonuclear Experimental Reactor (ITER) is currently being built in Marseille, France.  Set to be the world’s largest nuclear reactor and the product of collaboration between 35 countries, including every state in the European Union, the U.K., China, India and the U.S. ITER contains the world’s most powerful magnet, making it capable of producing a magnetic field 280,000 times as strong as the one around the Earth, Live Science previously reported. The fusion reactor is expected to come online in 2025, and it will provide scientists with even more insights into the practicalities of harnessing star power on Earth… Elsewhere, the first viable fusion reactor could be completed in the United States as soon as 2025.” – Live Science, Jan. 2022

In Dec. 2021, Bloomberg Intelligence reported that the fusion market could achieve a $40 trillion valuation. With the likes of Chevron, Eni, Hitachi, General Electric, Toshiba, Rolls-Royce, and many others investing in fusion R&D, major breakthroughs are expected sooner than initially anticipated. The “energy gain” reported this month is one example.

“The implied enterprise value multiple to gigawatt usage over 20 years gives oil, gas and coal single-digit multiples vs. renewables’ huge 17x multiple, one that cheaper fusion could exceed, given it would undoubtedly replace all primary energy. Energy is at the center of all economic activity. The efficiency afforded by fusion — low input cost and the promise of endless energy produced — suggests that viable commercial nuclear fusion is a development off the Richter scale of modern advancements.”

Unreported by legacy media in its latest push to advertise the future of fusion for unlimited clean energy is the excess megajoules used to produce the previous breakthroughs, and then there’s a patent filed for a “Plasma Compression Fusion Device” lodged in 2019 on behalf of the Secretary of the Navy. The patent is for a fusion reactor that can both generate enormous power and be small enough for mobile platforms, including spacecraft.

“In the patent description, Dr. Pais explains how his nuclear fusion device differs from similar devices under development: At present there are few envisioned fusion reactors/devices that come in a small, compact package (ranging from 0.3 to 2 meters in diameter) and typically they use different versions of plasma magnetic confinement. Three such devices are the Lockheed Martin (LM) Skunk Works Compact Fusion Reactor (LM-CFR), the EMC2 Polywell fusion concept, and the Princeton Field-Reversed Configuration (PFRC) machine. These devices feature short plasma confinement times, possible plasma instabilities with the scaling of size, and it is questionable whether they have the ability of achieving the break-even fusion condition, let alone a self-sustained plasma burn leading to ignition… Consequently, the nuclear fusion reactors used in the Navy’s secret space program are over four decades old, which provides a compelling reason for why the Navy is allowing the release of these technologies now.” – Exopolitics, Oct. 2019

There appears to be top-secret technology that’s finally being utilized in civilian R&D projects. Stay abreast of developments in fusion energy development for investment opportunities of a lifetime. Beware of the “green energy” greenies celebrating breakthroughs in nuclear fusion in order to distract you from the catastrophic consequences of its anti-fission, anti-oil policies. 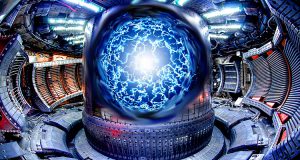