In a new Q1 report from the Institute of International Finance, they report a stunning new development: global debt is at an unsustainable level. I know the lead into the punch-line was suspenseful, but all jokes aside, the global debt has reached another new high. According to this report, global debt has reached $217 trillion. When you look at global GDP numbers, this is where you shake your head and just ponder.

Global GDP is roughly $66 trillion, which means the debt-to-GDP ratio is 327%. Based on the calculations, this means $50 trillion was added during the last decade alone. This data shows that China is the largest reason for this credit expansion, at roughly 300% debt-to-GDP. Since 1995, non-financial corporation debt has grown from roughly $75 trillion to $175 trillion. This is an astronomical increase of 133% over 22 years. Total non-financial corporation debt has grown to a total of 242% of GDP. 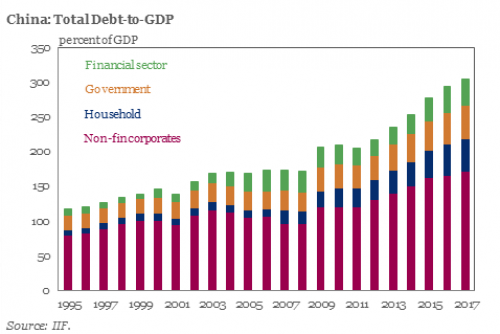 Additionally, dollar bond issuance has catapulted over the last 5 years, with only a dip in 2015-2016. The trend continued in 2016-2017 to regain peak levels. Statistically speaking, since 2016, emerging market debt has increased by $2.5 trillion. What is increasingly worrisome is that only 25% of emerging market debt is tradeable on the benchmark bond indices. More and more of this debt is becoming highly speculative as the credit worthiness continues to deteriorate. “This is an especially acute problem because there is $1.9 trillion in emerging market bonds and loans coming due by the end of 2018.” Oil exporting nations are in complete turmoil, as their budgets remain the same as revenues continue to collapse. A barrel of oil has floated around the mid-$40s, and for a country like Saudi Arabia, the break-even point is somewhere in the $90s.

Do you find it all coincidental that Saudi Aramco has an IPO upcoming?

The reason for this is to use the windfall funding to finance the government and to make Saudi Arabia less reliant on oil. Countries that are so reliant on oil have had no other way to finance operations than to issue more debt.  New sovereign debt of these countries was roughly $275 billion in 2004. In 2017, this debt rose to roughly $450 billion, or an increase of 64% in 13 years.

If this path continues, new debt will reach $775 billion, or 57% of GDP, which doesn’t include all the old debt.

This increase is in a world where central banks are raising interest rates. There is evidence that the Fed is desperate and trying to remain relevant. Raising interest rates in a weak economy makes no sense unless they are trying to continue the wealth transfer that has been happening repeatedly. 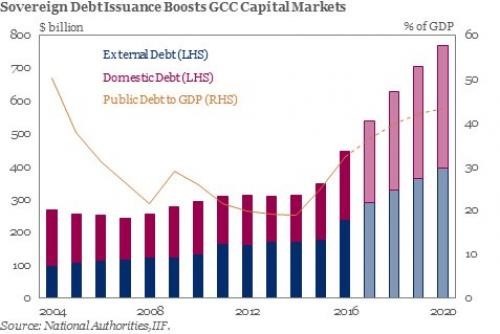