Update: At time of writing, gold and silver prices were experiencing tremendous difficulty breaking past upside technical resistance. With the impact of Hurricane Harvey and the potential for armed conflict with North Korea, the bullion markets surged on Monday trading.

Being a bullion markets investor has never been an easy task, but this inherent challenge was all the more magnified in recent trades. Gold and silver prices are up for the year, reversing long-term, bearish cycles. Yet what precious metal proponents need to see now is a decisive move higher. Without it, further damage could result.

The technical charts couldn’t paint a more stark, do-or-die scenario for the bullion markets. While gold prices are up nearly 13% year-to-date, the traditional safe-haven asset has been flat since mid-April. More critically, gold has formed a triple-top formation at the key, psychological resistance barrier of $1,300. 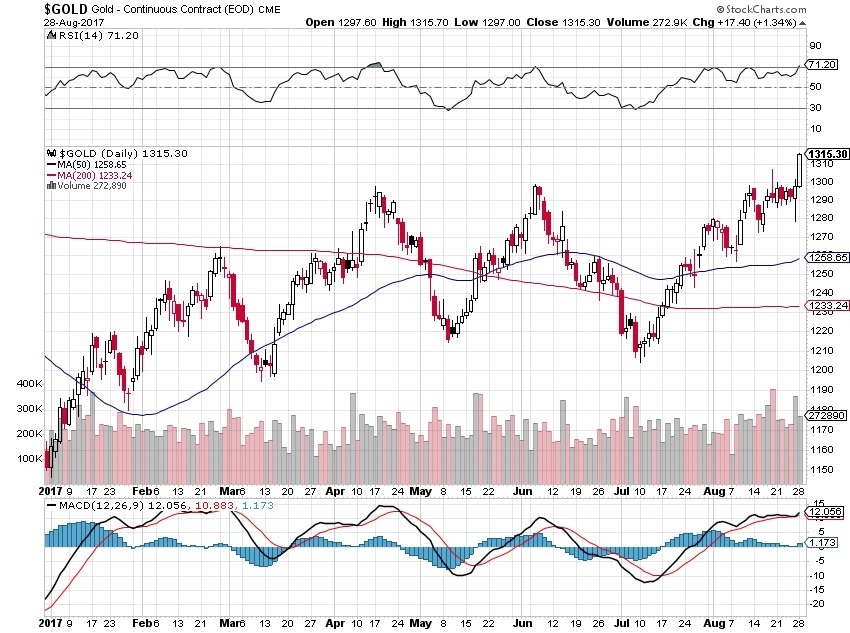 In the first two swings at the bat, gold prices quickly fell apart. On this third go-around, spot-gold is much more resilient, which is the good news. The bad news is that $1,300 has yet to be conquered, only flirted with.

The problem is more pronounced with silver. Rather than a triple-top formation — which at least shows bullish intent — silver prices peaked this year in mid-April. Since then, the white metal has traded in a series of lower highs and lower lows. Typically, an asset would continue to descend further into ignominy. The one positive is that silver prices are currently holding onto the $17 level.

Part of the reason why the bullion markets have held their ground recently is due to supportive fundamentals. Economic risks posed by Hurricane Harvey and geopolitical tensions in the form of North Korea are major contributors to uncertainty and fear. Such dynamics represent major catalysts for gold prices, and in turn, silver prices.

But the present situation is much more serious than in prior circumstances. Gold and silver prices need a desperate credibility boost. Through panicked selloffs and even mainstream accusations of market manipulation, the bullion markets have largely floundered and flopped. Now, the precious metals must convincingly break past upside resistance, and remind investors of their validity.

The consequences of falling short this time are dire. As mentioned above, the technical patterns suggest bearishness. If gold and silver prices fall now, it would only serve to reinforce broad market perception that the precious metals are overstretched. We could then see the metals fall to further lows, erasing the good work done in 2016.

Obviously, that’s not a desirable outcome. My gut instinct tells me that gold prices, along with silver, will break past their technical ceilings. Simply put, there’s just too much fear in the markets for mainstream investors to ignore the precious metals.