I’m not one for depending on any single metric or indicator to base my investing decision. For instance, if you’re buying a company’s equity, I’d look at both the technical and fundamental narrative. That said, for the purposes of broader investing and protectionary strategies, I’d take a long look at the gold-silver ratio.

By itself, the gold-silver ratio isn’t particularly interesting. In lay terms, it’s how much silver coins (assuming one-troy ounce weight) you can buy for a troy-ounce of gold. The natural ratio found above ground has historically been around 10:1. Currently, the natural ratio has risen to roughly 16:1.

Market valuations obviously fluctuate over time, and with the influx of fundamental drivers. But at last count, the gold-silver ratio jumped to nearly 92:1. In other words, you can exchange a troy-ounce gold coin for 92 silver coins (taking aside considerations like taxes).

To say that silver is absurdly undervalued doesn’t do this situation justice. From the beginning of time, silver has had monetary value associated with it. Later, industries discovered the metal’s unique properties, and have depleted its overall supply.

An old adage states that all the gold ever mined remains with us today. You can’t say the same about silver. And while gold enjoys a remarkable turnaround, breaching $1,400 recently, silver remains somewhat of a lackluster investment.

Historically, the gold-silver ratio has been a very useful and accurate early-warning indicator. To astute investors, the metric told them to gear up for potential calamities such as wars or recessions.

Take a look at the following 100-year GSR chart from MacroTrends.net: 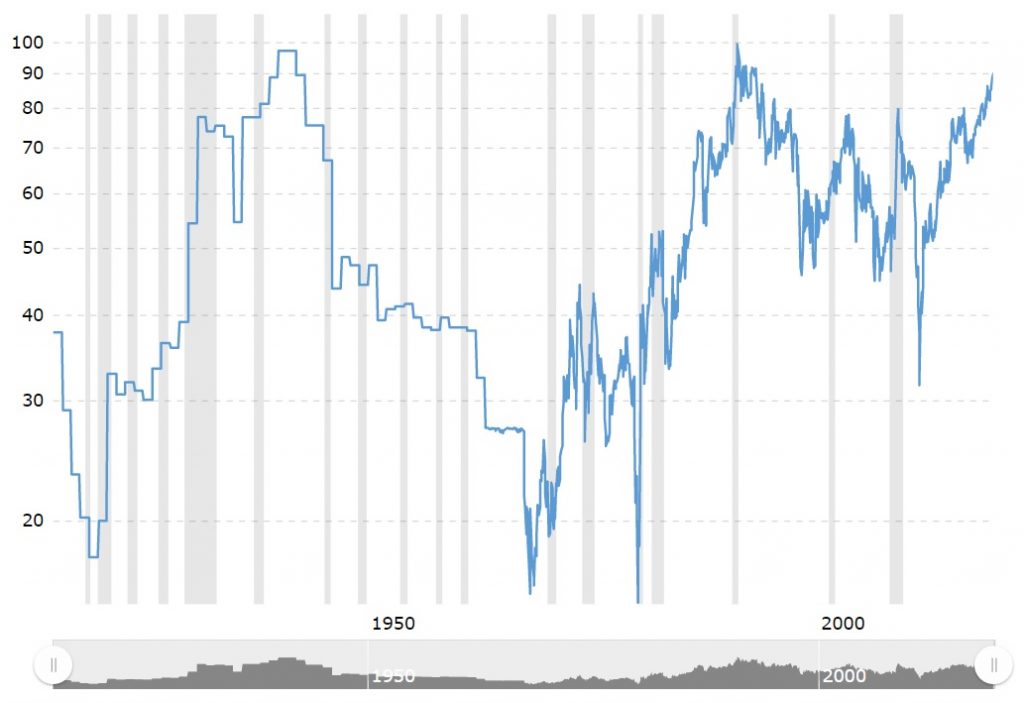 Around the time that the U.S. was no longer on the gold standard, a rising GSR provided a clue as to what will happen next. Usually, the incoming event wasn’t a pleasant one: we’re talking either economic hardships or outright military conflicts.

Of course, no one indicator is absolutely accurate, and the GSR is no exception. However, it’s accurate enough to warrant attention.

For instance, I can’t help but notice in the modern era that the GSR jumped prior to key events: the Persian Gulf War and the 1990s recession, the 9/11 terror attack, the 2008 financial market meltdown.

As I mentioned earlier, the GSR is approaching all-time record highs. I’m not surprised, considering that we’re likely headed to war with Iran. We also have a damaging trade war with China, while India is imposing tariffs on us.

Obviously, you can do what you want with your money. For me, the message is clear: it’s time to protect yourself from the coming onslaught.