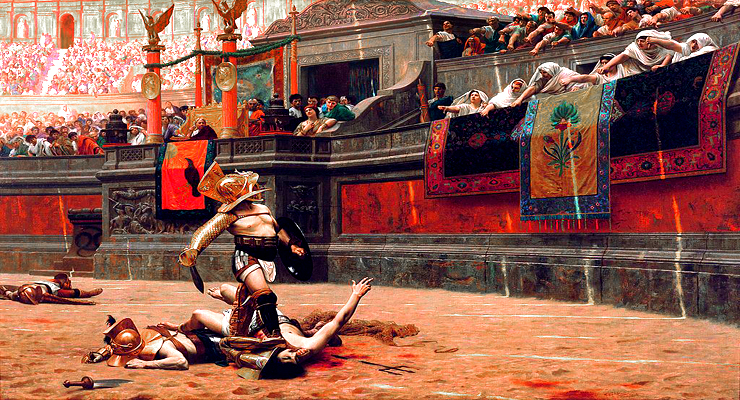 I did not anticipate an addition to Part 1 so quickly, which covered plunging consumer sentiment, declining consumption, scarcity inflation, and waning GDP. Unfortunately, recession signals are popping up so fast and furious that it’s best to ink them before they outrun my ability to keep articles brief and on point.

Let’s begin with a tour of bread and circus reality within a local realtor’s high-end neighborhood in “The Golden State” of California.

The liars in D.C. proclaim that the U.S. economy is wonderful, yet Biden is inexplicably extending the moratorium on federal student loan payments to benefit a demographic filled with first-time homebuyers. The government and millennials finances are actually bankrupt and struggling to make ends meet, so perhaps a loan forgiveness scheme with more free bread from taxpayers is the underlying hopium plan to keep a housing bubble afloat for debtors that cannot afford to own a home and/or are unable to accumulate enough savings for a down payment.

South Carolina-based Movement Mortgage laid off around 170 employees in March… “Another case of a top-25 mortgage lender paring back its workforce due to a more challenging origination landscape. Pink slips are arriving to employees across the country, including professionals in the processing, underwriting and closing areas,… The higher-rate landscape is affecting all mortgage companies. The largest nonbank players, like Rocket Mortgage, United Wholesale Mortgage, LoanDepot have a cash cushion due to the historic years of 2020 and 2021. Others aren’t as fortunate. Digital lender Better.com, which rocketed to the top 25 by making a killing with refis, has laid off 3,000 employees. Other refi-centric lenders, such as Interactive Mortgage, recently cut 51 jobs. Freedom Mortgage also cut jobs.” – Housing Wire, Apr. 4

Federal Reserve issues warning about “brewing U.S. housing bubble”… “That may be unsettling to millions of potential homebuyers coping with myriad financial pressure points. Mortgage rates are swiftly rising, reaching an average of 4.67% for a fixed 30-year loan as of March 31 – the highest since 2018… The national median listing price for a home has jumped to a record $405,000… Millennials now represent the largest U.S. generation in their prime home buying years… The typical listing price jumped 27% in the past two years… When the exuberance measure reaches a 95% threshold, that signals 95% confidence that the market is experiencing ‘abnormal explosive behavior’… The current measure is 115%… Comparing home prices against the sum of discounted future rents is showing exuberance that is ‘comparable to the run-up of the last housing boom’… The ratio of home prices to disposable income hasn’t risen to exuberance, but economists noted that disposable income was buoyed by pandemic stimulus checks – a transitory factor.” – CBS News, Apr. 5

When Federal Reserve Governor Lael Brainard speaks, markets listen… “Federal Reserve Governor Lael Brainard said the U.S. central bank will continue to tighten policy methodically and shrink its balance sheet at a rapid pace. Brainard’s hawkish remarks sent bond prices crashing and 10Y bond yields up over 16 bps. While Bankrate’s 30Y mortgage rate is down slightly today, the surge in the 10Y and 2Y Treasury yields could push mortgage rates above 5% by tomorrow. Even Europe is feeling Brainard’s wrath. Italian 10Y sovereign yields are up almost 20 bps. The NASDAQ index is down 300 points on Brainard’s utterance. Gee thanks Lael from all us wanting to finance the purchase of a house. – Anthony Sanders, Apr. 5

Since Obama is “calling the shots” at the White House and Biden was just a straw man, did you expect anything less than tyranny, corruption, and destruction by socialist psychopaths?

When you layer in the West’s sanctions against Russia for its military intervention in Ukraine, the ramifications have just begun to backfire on the U.S. economy. We’re in much deeper trouble going forward than the average plebeian might realize.

Dallas Fed: Global recession ‘seems unavoidable’ if Russian sanctions continue… “The warning, which comes in the Fed report ‘The Russian Oil Shock of 2022,’ was made prior to President Joe Biden on Monday calling for additional sanctions against Russia. If Russian sanctions continue, and international markets don’t have access to Russian exports of oil, natural gas and key agricultural exports for the rest of the year, a global recession is inevitable, Dallas Federal Reserve economists project in the report… ‘Our nation has an opportunity to reshape American energy policy that recognizes oil and natural gas as an asset rather than a liability,’ Texas Oil and Gas Association President Todd Staples said… ‘Wheat and fertilizer supplies could be disrupted in 2022 and beyond and make it more costly to put dinner on the table,’ they said. Additionally, ‘the diminished supply, along with a shortage of fertilizer produced from natural gas, will drive up global food prices and reinforce the growth-retarding and inflationary effects of higher fuel prices.’” – The Center Square, Apr. 5

The oil shock is not only triggering a plunge in consumer miles traveled by car that hastens sluggish economic activity across all sectors, but Jet fuel prices are skyrocketing on tight supply that will substantially increase ticket pricing and result in fewer bookings for business, personal, and vacation travel.

Truckers and the transportation industry are also getting hit with high fuel costs at the diesel pump, and are on the precipice of a freight recession as outbound tender rejections are heading back into negative territory and have erased all the gains made since spring of 2020.

Why I believe a freight recession is imminent… “Tender rejections are the best indicator into real-time supply/demand in the truckload sector. The data comes from actual electronic load requests – ‘tenders’ in the truckload contract market. A high rejection rate means that trucking companies have more options to choose from. A low rejection rate means carriers have fewer options in freight to pick from. Since this measures actual load activity and not load board posts or searches, it tells us what the market is actually doing… Even though it has only been a week since I wrote the ‘bloodbath’ article, the rejection rate has fallen another 1.3%. The last week of March is normally one of the best weeks of the year for carriers, but this year it has been one of the worst.” – Freight Waves, Mar. 31 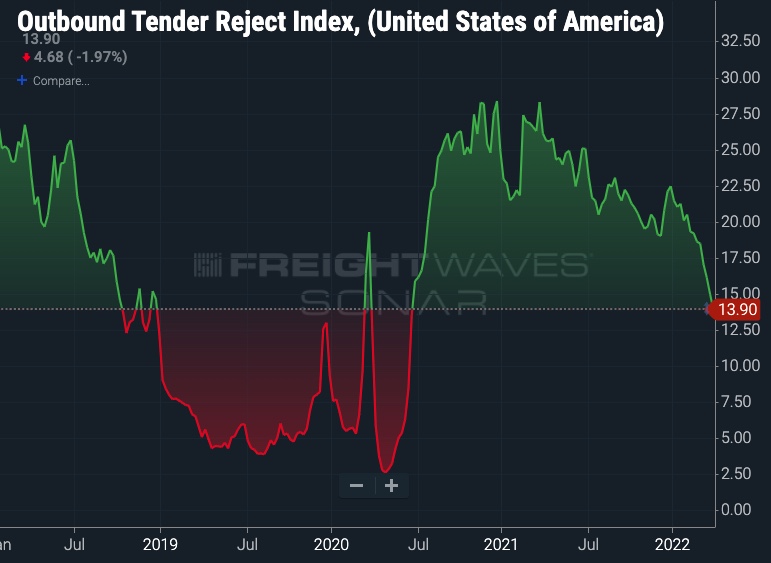 If you thought the supply chain crisis in ocean freight shipping would resolve itself sooner than later, I’m sorry to report that Shanghai extended a new COVID lockdown of its 25 million residents. China’s shipping ports, land freight, and manufacturing hub are severely impacted due to another pandemic wave and consequences of the lockdown. An unprecedented number of ships are waiting at Shanghai ports to load or discharge and reverberations through global supply chains has not yet manifested. China’s economy has contracted at a dramatic pace and to levels not seen since the Wuhan lockdown in 2020. 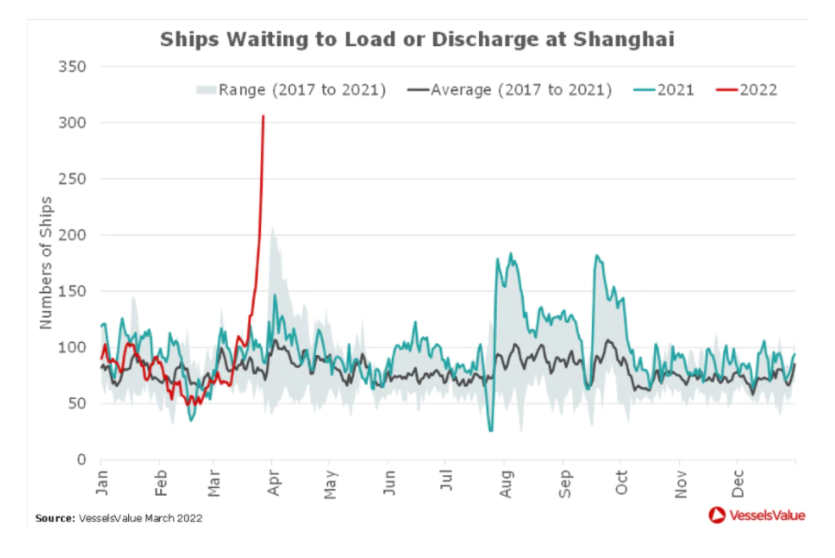 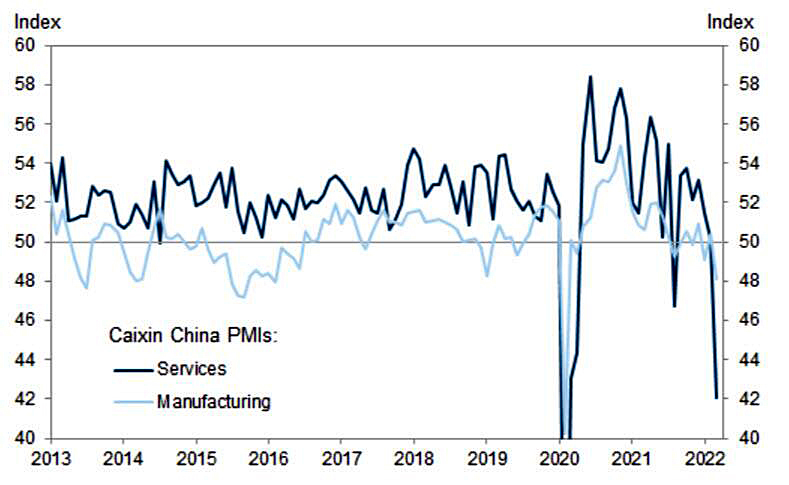 Concerns over a new Arab Spring brewing in the Middle East has taken a backseat as Peru beat the world to the finish line. Citizens of Peru are taking the lead with social unrest over issues surrounding food inflation and rising fuel costs.

Peru imposes curfew to stymie protests over rising fuel costs… “Peruvian President Pedro Castillo imposed a curfew in the capital, Lima, on Tuesday, banning people from leaving their homes in an attempt to curb protests against rising fuel and fertilizer costs that have spread throughout the country… The protests have become increasingly violent and at least four people have been killed. On Monday, protesters burned toll booths and clashed with police near the southern city of Ica. ‘This strike isn’t happening just here, it’s all over Peru,’ said one protester in Ica, who declined to be identified.” – Reuters, Apr. 5

The food situation in the U.S. is not looking great. An epidemic of bird flu is raging across the country and a huge number of poultry flocks are being slaughtered. Infected flocks (map) are culled as quickly as possible to limit the risk of transmitting the virus to other nearby facilities. In Iowa alone, the bird flu death toll has topped 13.2 million chickens and turkeys. The fertilizer shortage and high fuel costs are also breathing down the neck of farmers. A persistent drought on the plains and western states are likely to curb this year’s wheat harvest and add to domestic supply worries. The Federation of Bakers has already warned the U.S. government of a looming crisis in the baking industry that’s facing impending cost increases, noting that consumers are likely to experience bread shortages, and overall supply uncertainty not seen in the past generation, “if ever.”

Wall Street titans are just beginning to bark about a global and U.S. based recession in the near future. In my humble opinion, it’s about to unleash in the U.S. much sooner than most analysts suggest. The Fed’s TaperCaper will abruptly kill any hope for a Goldilocks economy to emerge.

Goldman Poll Finds Insurers With $13 Trillion Expect a U.S. Recession… “Insurance executives who oversee more than $13 trillion in assets expect the U.S. to enter a recession in the near future, according to an annual survey conducted by Goldman Sachs Group Inc. Of 328 chief investment officers and chief financial officers polled, more than 60% anticipate the world’s largest economy will experience a downturn. The results indicate ‘a clear shift in outlook globally,’ Goldman said in the report.” – Bloomberg, Apr. 4

Deutsche Bank is the first big bank to forecast a US recession… “The Federal Reserve’s fight against inflation will spark a recession in the United States, Deutsche Bank warned on Tuesday. The recession call — the first from a major bank — reflects growing concern that the Fed will hit the brakes on the economy so hard that it will inadvertently end the recovery that began two years ago. ‘We no longer see the Fed achieving a soft landing. Instead, we anticipate that a more aggressive tightening of monetary policy will push the economy into a recession,’ Deutsche Bank economists led by Matthew Luzzetti wrote in the report. That forecast is driven by red-hot inflation, with consumer prices rising at the fastest pace in 40 years. Hopes that inflation would rapidly cool off have been dashed, in part because of the war in Ukraine.” – CNN Business, Apr. 5

Jamie Dimon: The war in Ukraine will slow the economy and it could ‘easily get worse’… “Dimon, one of the world’s most influential business leaders, warned Monday in his annual shareholder letter that the conflict poses a significant threat to the economy… ‘The war in Ukraine and the sanctions on Russia, at a minimum, will slow the global economy’… Dimon recalled how the 1973 oil embargo sent oil prices skyrocketing, pushing the world into a recession… ‘America must be ready for the possibility of an extended war in Ukraine with unpredictable outcomes… We should prepare for the worst and hope for the best. We must look at this as a wake-up call.’” – CNN Business, Apr. 4

That raps it up for today. I’m sorry if the news sounds doomy, but this is not a drill. Stock up on nonperishable food items without delay and practice the art of baking basic breads at home.

Work Together and Survive – Gladiator (2000) 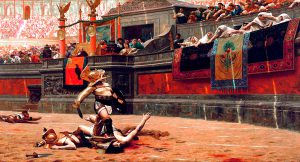