In light of the recent tragic school shooting in San Bernardino, California, we must take vigilance in not proliferating false equivalencies. Too often, in violent crime events where firearms are involved, liberal political groups are quick to denounce gun ownership. In their view — which is increasingly mainstream — more draconian gun laws are the answer to violent crime.

Those supporting the progressivism view have multiple pet statistics they love to project. They mention Japan, where only one in 175 households own a firearm. With the country maintaining an extremely low violent crime rate, and where only one in 100,000 people are murdered, it stands to reason that there exists a correlation between gun ownership and firearm-related crime.

In a limited sense, the assertion by the progressivism perspective is true. Japan will never have as high of a firearm-related violent crime rate as the U.S., which according to some statistics the gun ownership rate is around 33%. There are simply not enough firearms for the Japanese to “catch up.”

Having said that, gun laws cannot possibly begin to solve our nation’s violent crime epidemic. Any claim to the contrary is either fake news or woefully misguided reporting. What is not mentioned in the mainstream analysis of violent crime is that they almost always associate gun ownership as a casual factor. In reality, a truly scientific analysis must establish the existence of a cause-and-effect relationship; otherwise, the data points are simply pieces of information.

This is the fatal flaw of progressivism. Rather than find a quantifiable — or even a solid qualitative — basis for their assumptions, they instead establish the assumption as the basis. Because they assume that gun ownership necessarily results in violent crime, they look for data points that support this predefined view. The analysis is therefore tainted from the very beginning.

Instead, we need to establish a purely agnostic baseline and let the results speak for themselves. If gun laws were truly effective at limiting gun ownership and therefore violent crime, we should see a clear relationship between the proliferation of firearms and crime rates. The more guns are on the street, the more violent crime is being committed. 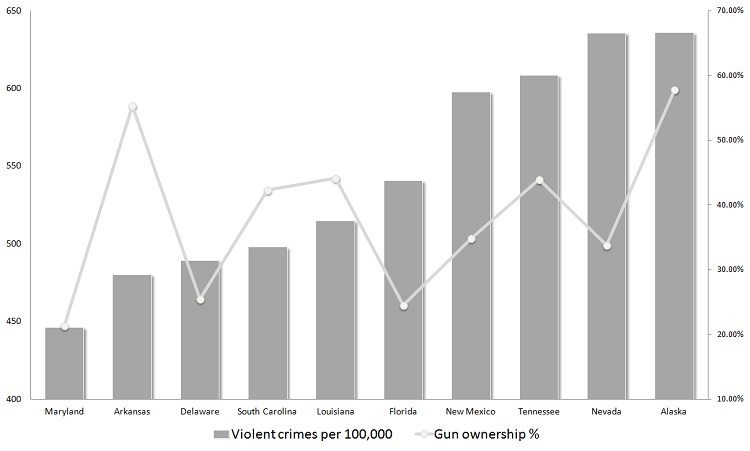 Unfortunately for progressivism, we do not see any useful relationship. This is particularly conspicuous when we analyze the top ten violent states in America. If the assertions from progressivism is accurate, we should see an increase in gun ownership statistics as the violent crime rate rises. In some cases, this is true; in others, it is not. All told, we have a 32% correlation between gun ownership and violent crime.

From a purely scientific standpoint, a 32% correlation is exceptionally weak. One could not make a useful hypothesis from such a low magnitude of correlation. Certainly, gun laws based on this spurious relationship would be misguided at best.

What the real kicker, though, is the effect of the extreme ends of the bell curve. If we were to take out the most violent state (Alaska) and the least violent state (Maryland) out of the top ten by assigning a 0% value to them, the overall correlation would drop to -5%. That indicates an extremely weak inverse correlation — more guns equates to less violent crime.

To be fair, we cannot use this data to say that looser gun laws would solve our societal violence issues. This is a deep-seated dilemma that goes far beyond gun laws and gun ownership. What we can say with confidence is that in a vast majority of violent crimes, gun ownership is an irrelevant element. Logically, then, draconian gun laws would serve no purpose in addressing society’s ills.