Thanks to unprecedented draconian firearm laws passed in California last year, online retailers of ammunition are experiencing a surge in sales from the “Golden State.” Under Proposition 63, California shooters will be banned from having ammo shipped to them directly next year, and must conduct transactions through a licensed ammo vendor. As a result of these restrictions on gun rights, Californians have stocked up on popular calibers such as the venerable .223 Remington.

On surface level, gun stores appear to be the first line of defense against these radical firearm laws. To them, an infringement of gun rights is a direct assault on their revenue stream. Thus, many in the firearms business put up a fuss about how they support the Second Amendment and that they are fighting the good fight against the tyrannical government. However, if the laws are tweaked just right, gun stores actually benefit from restrictions on gun rights.

That sounds like blasphemy until you consider some facts. For instance, none in the firearms business encouraged sane and rational thinking during President Obama’s administration. Whenever mass shootings occurred and Democrats threatened to impose harsh restrictions on gun rights, gun stores fanned the flames. In fact, many, if not a majority of firearms business owners gouged customers on fears that the much-derided AR-15 rifle would be banned. 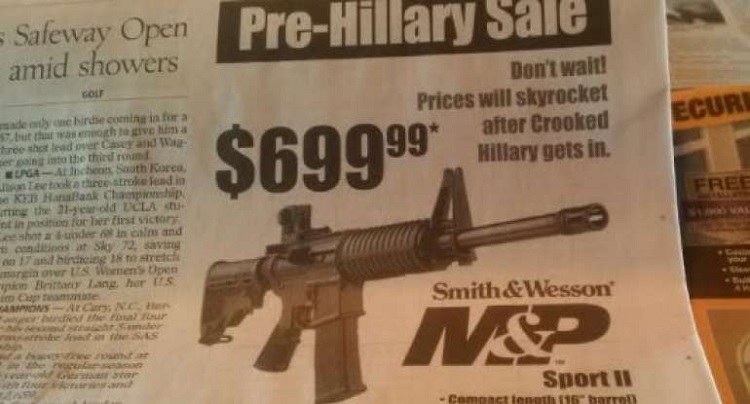 In California, the situation will get worse. Once the core weight of Prop 63 takes effect next year, ammunition sales must be conducted through licensed vendors. This simply creates an unwarranted middleman opportunity for the firearms business. Rather than conducting business with a retailer of choice, state law forces residents to unnecessarily include California gun stores. Essentially, you have to pay a commission to a California firearms business, even though they have nothing to do with the original transaction.

Are Golden State gun stores protesting this and similar firearm laws? Perhaps in pretense, but the actual sentiment is murky. Honestly, why would you? Imagine if you are a Ford dealer, but that you got a cut every time a Toyota was sold. Would you give up the easy money, or would you do the right thing by protesting this ridiculous circumstance?

As much as we would like to believe that gun stores are the biggest proponents of the Second Amendment, we have to realize that they are about the money first. Sadly, restrictive firearm laws force shooters of less-than-free states into economically bad choices. However, these are bad choices from the consumer end.

For the firearms business, they are a boon, no matter how unwarranted. And until that incentive is destroyed, gun stores are less than trustworthy.