Please enjoy your Thanksgiving.  If you dare venture out to any Black Friday madness, be careful, savvies.  If you make it to end of this post, a yuge belly laugh is guaranteed.

Rabbits have a habit of multiplying quickly over time, so “up” the rabbit hole of debt we go!  Speaking of time, it is time to refresh our memory banks (pun intended) of how and why all this ridiculous debt multiplied in the first place. The following video was created in an animated, easy-to-understand format that lays out the history of money, the Fed, the debt, and the great financial crisis of 2006, all in under thirty minutes!  Put away any know-it-all ego you may possess, and just watch it.  Have some fun while doing it over the holiday weekend, before scrolling through all the depressing charts I collected.

On to the video at Greg Hunter’s USA Watchdog for present-time issues, DiMartino Booth does not pull any punches. Here are a few outtakes: “Jay Powell regrets the re-leveraging caused by QE3 – Between 2007 and today, the global credit markets have grown from $170 trillion to $220 trillion and counting, so yes, you can go ahead and use the word bubble all you want  –  The fact is, there’s been so much debt built up, there’s not much more (interest rates hikes) I think, the credit markets can handle – What scares me about Bitcoin is the central bankers are studying it to figure out how the blockchain works. They are going to be controlling our spending with blockchain technology that is being perfected in the crypto currency universe – The recent high turnover at the Fed is like rats leaving a sinking ship – I am not a gold bug, but we do know that in times of corrections that there is no place to hide in traditional asset classes that you can get at your Merrill Lynch brokerage. Gold and silver in your hands are the only places to hide and get true diversification and safety.”

The corporate debt time bomb keeps growing, equals nearly half of US GDP… “Corporate debt is at its highest level relative to U.S. GDP since the financial crisis. A snap higher in rates or an economic slump could make it a bigger worry. The corporate debt market has been a focus after an exodus of the high-yield debt market in recent weeks, with a near-record $6.8 billion leaving junk bond funds. Debt of nonfinancial companies has grown $1 trillion in just two years and now totals $8.7 trillion, roughly 45% of GDP.” – CNBC, Nov. 2017 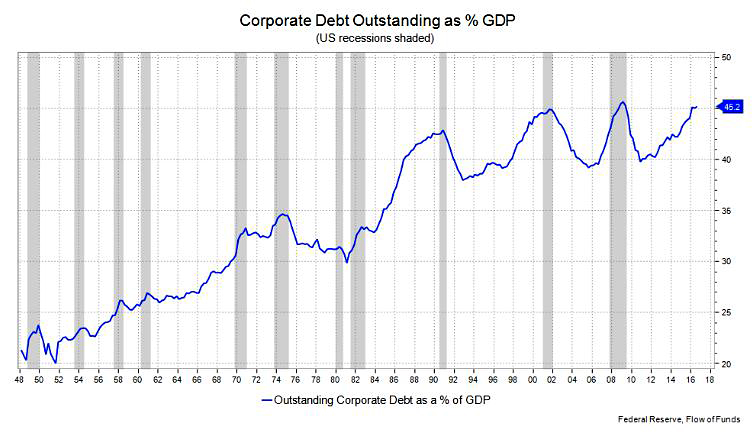 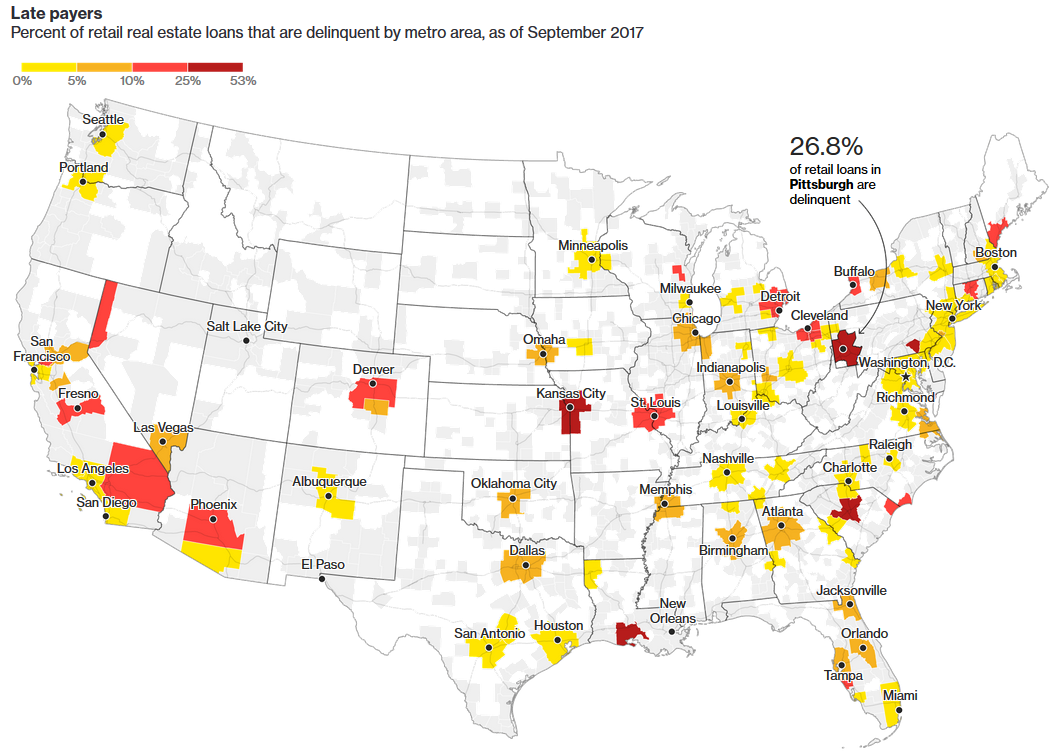 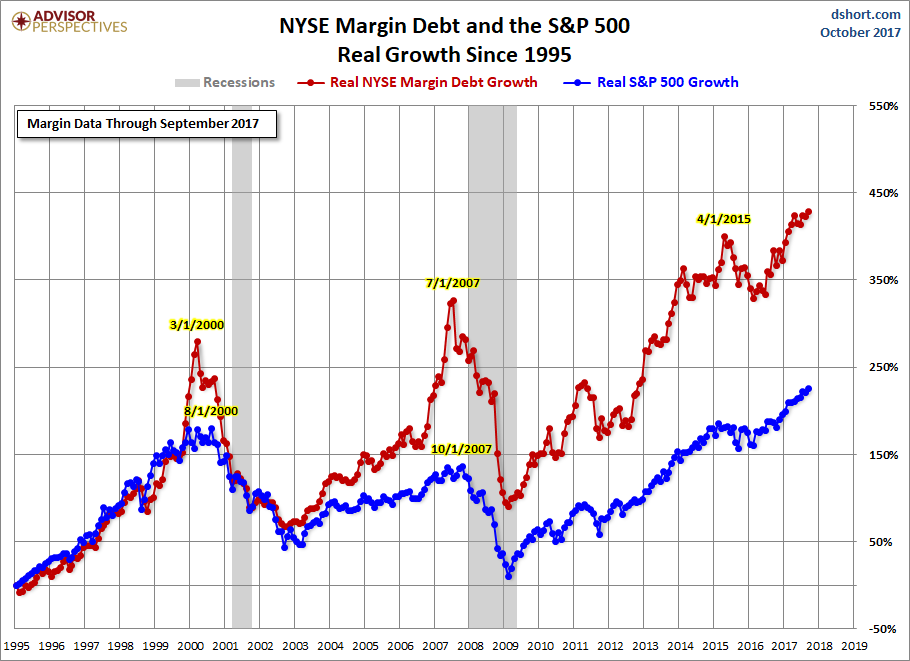 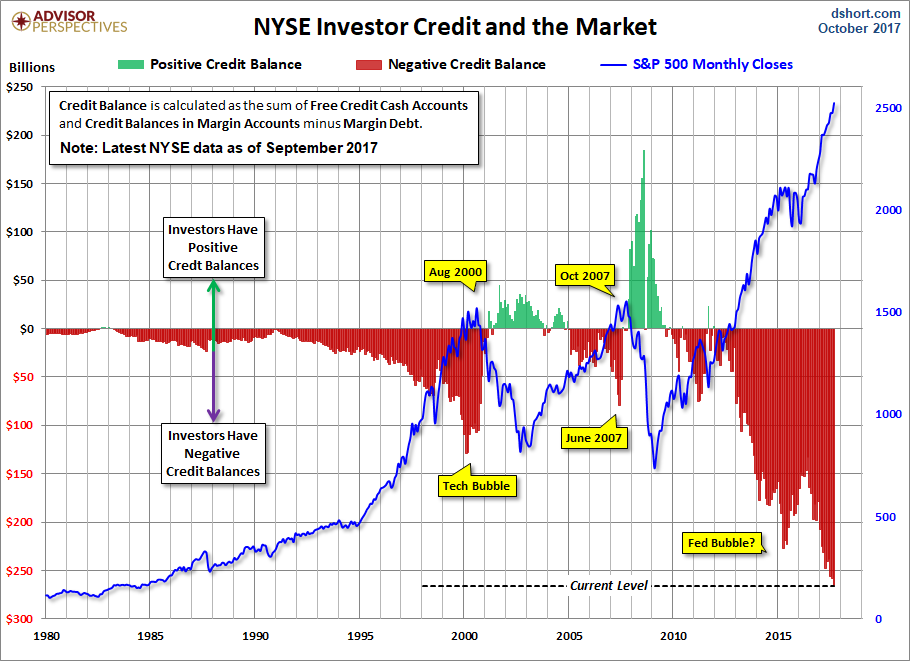 Household Debt Reaches New Record… “The Federal Reserve Bank of New York said Tuesday that household debt totaled $12.955 trillion last quarter, up 0.9% from the spring for a 13th straight quarterly increase. That was the most on record. Delinquency rates have been creeping higher for certain loans in a sign some Americans are under growing financial stress as the total debt held by U.S. households continues to hit new highs.” – Fox Business, Nov. 2017 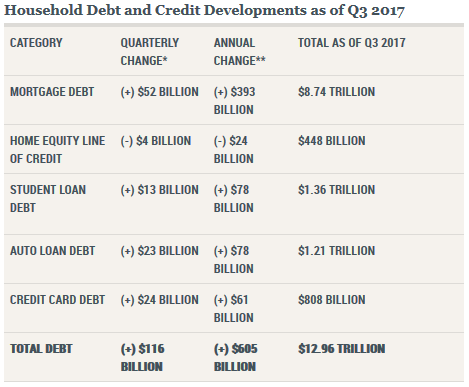 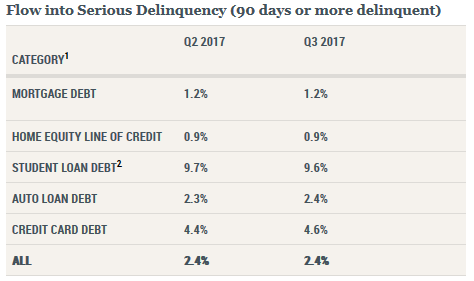 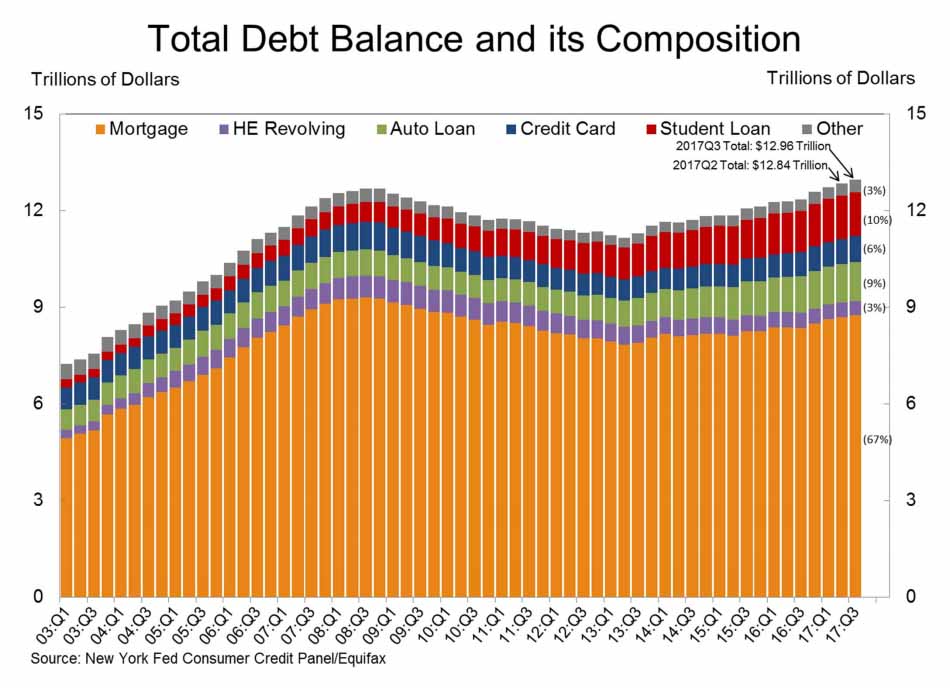 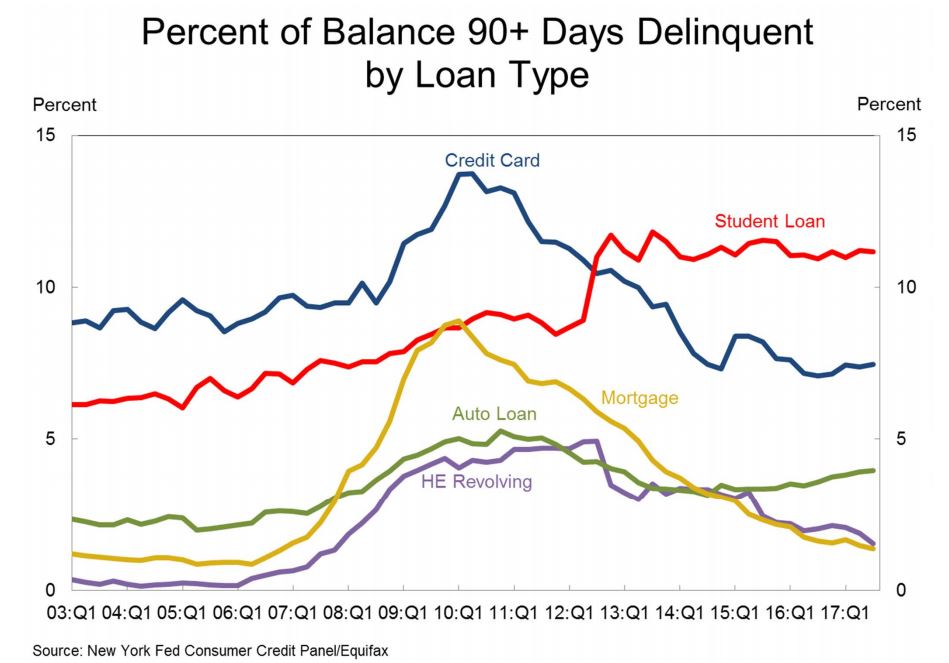 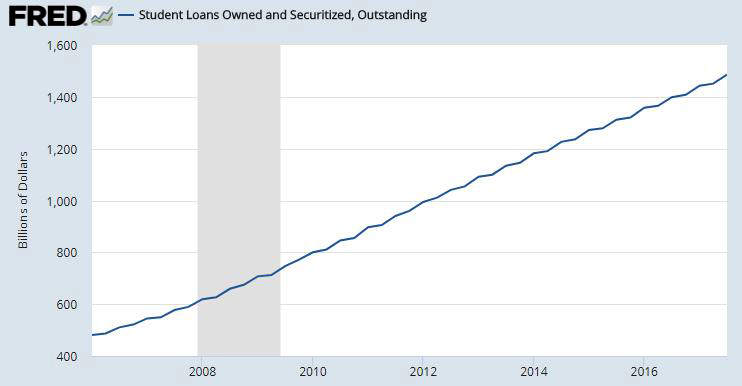 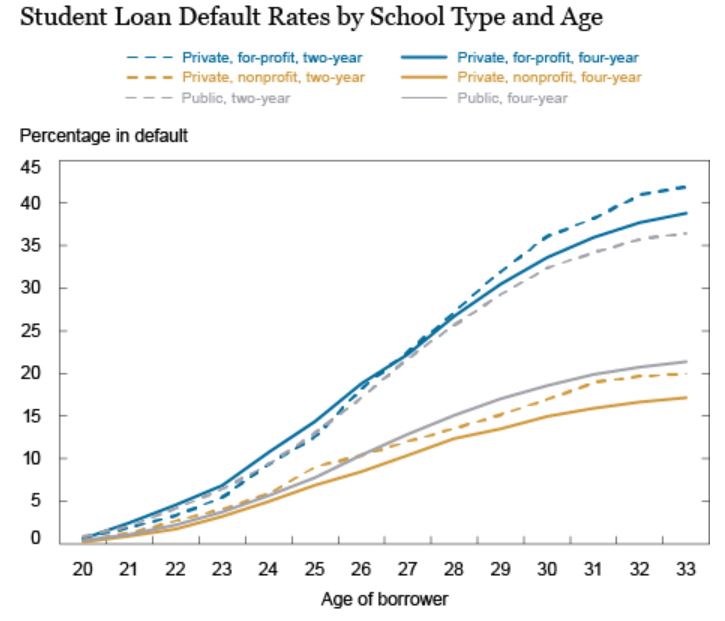 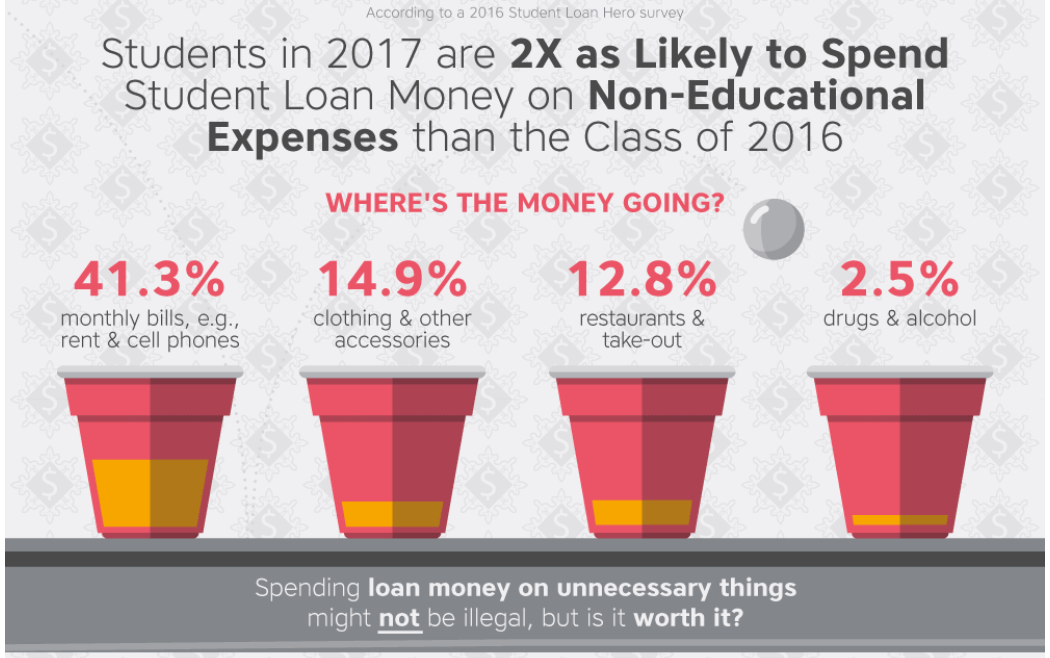 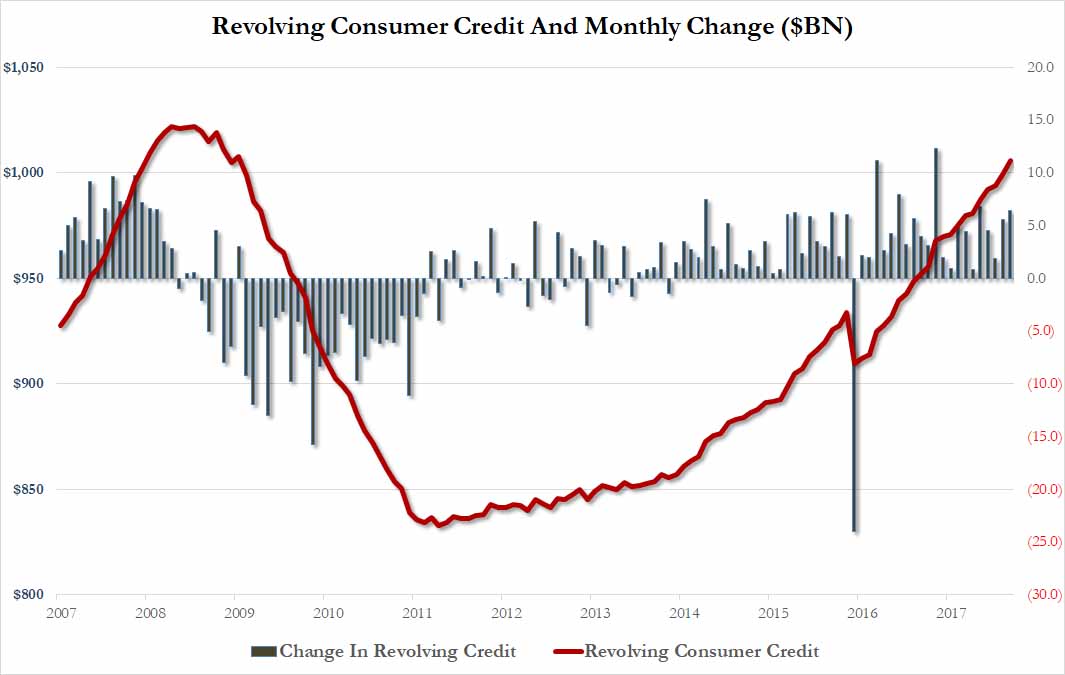 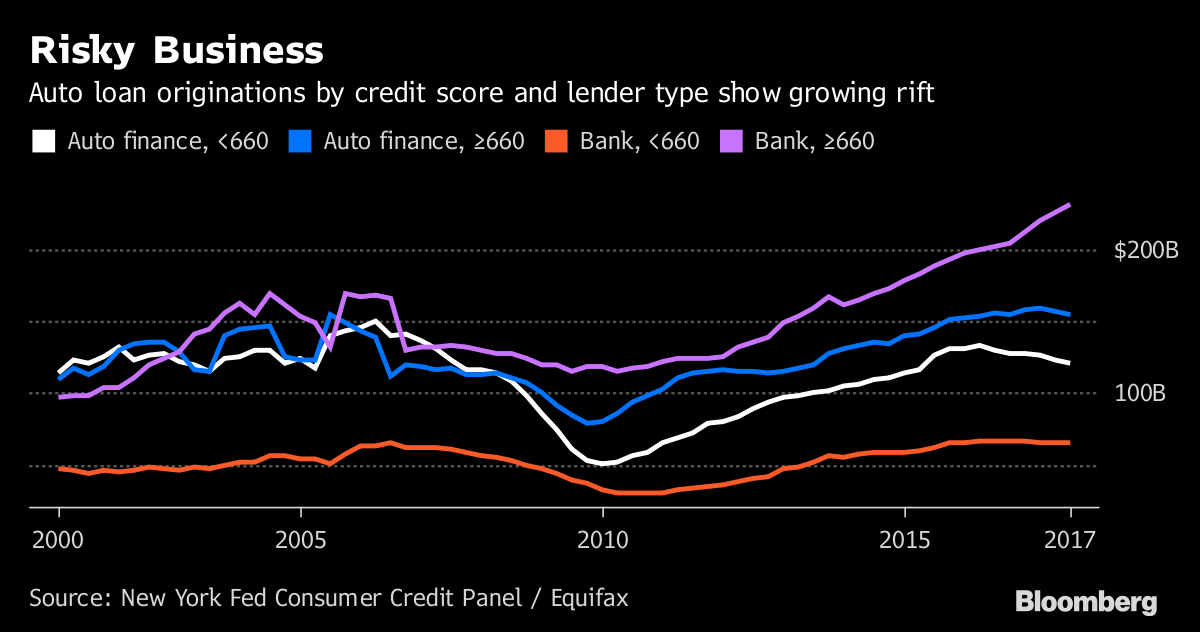 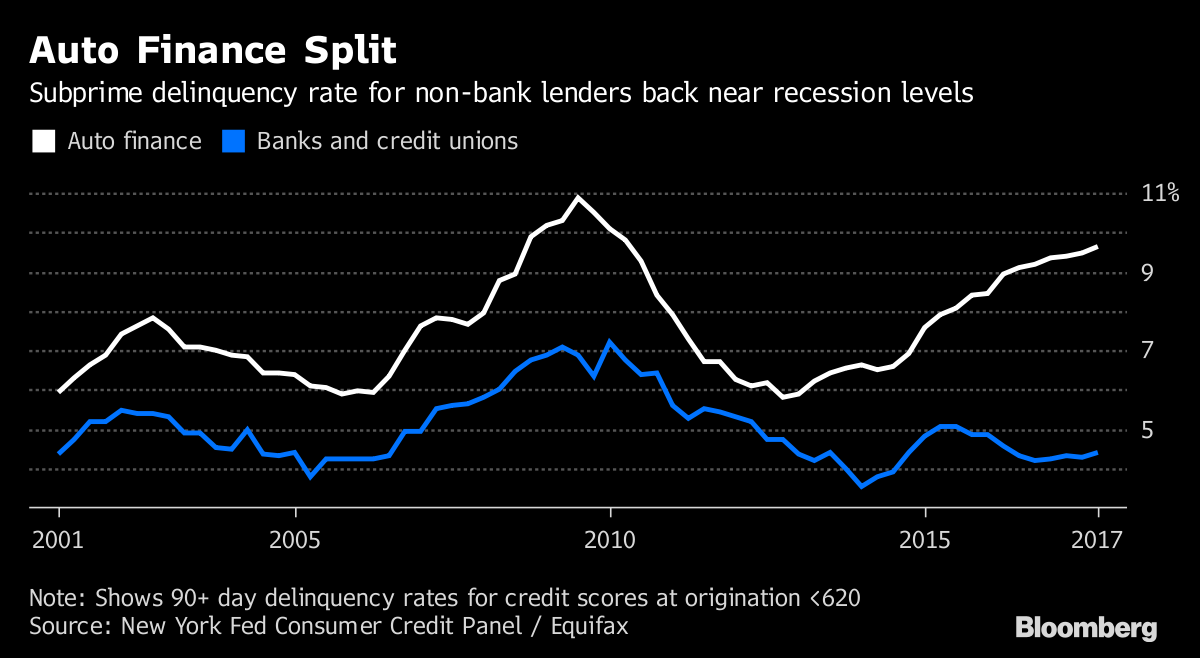 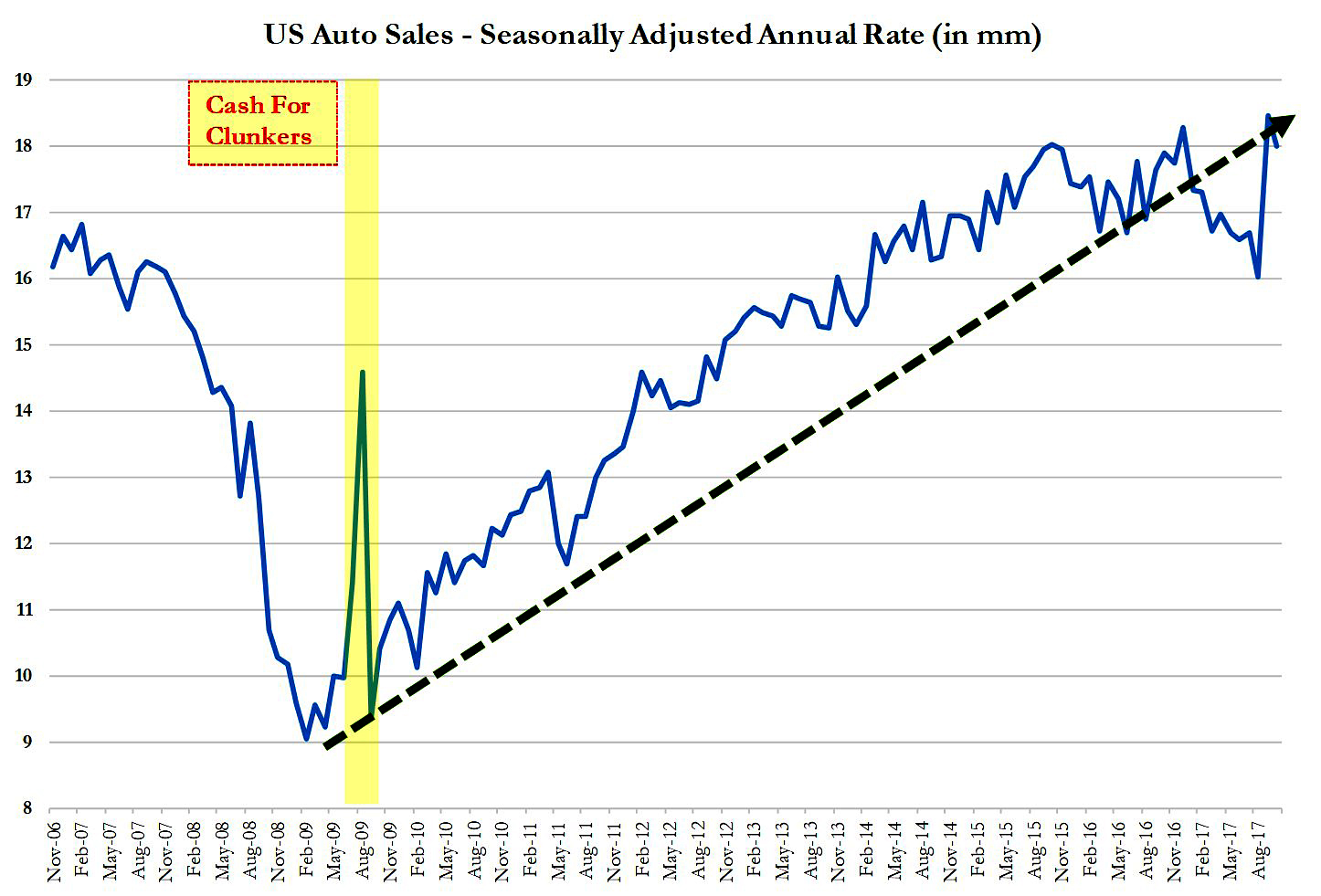 Jobs to pay off the debt?… 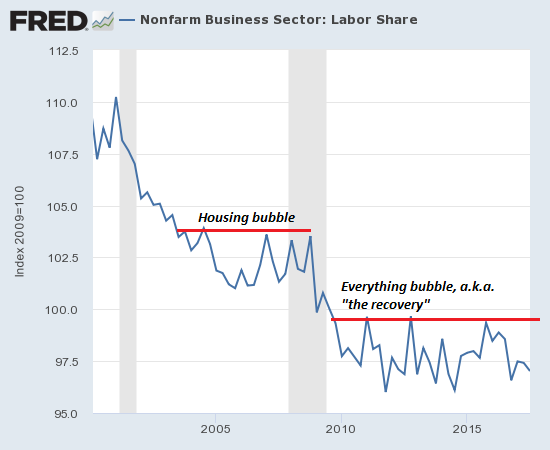 Most Americans live paycheck to paycheck… “No matter how much you earn, getting by is still a struggle for most people these days. 78% of full-time workers said they live paycheck to paycheck, up from 75% last year. Overall, 71% of all U.S. workers said they’re now in debt, up from 68% a year ago. While 46% said their debt is manageable, 56% said they were in over their heads. About 56% also save $100 or less each month, according to CareerBuilder.” – CNBC, Nov. 2017 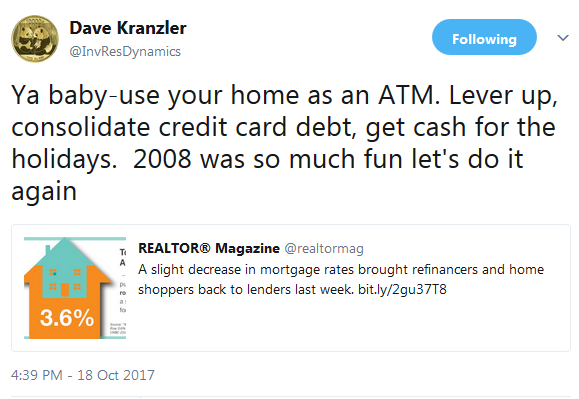 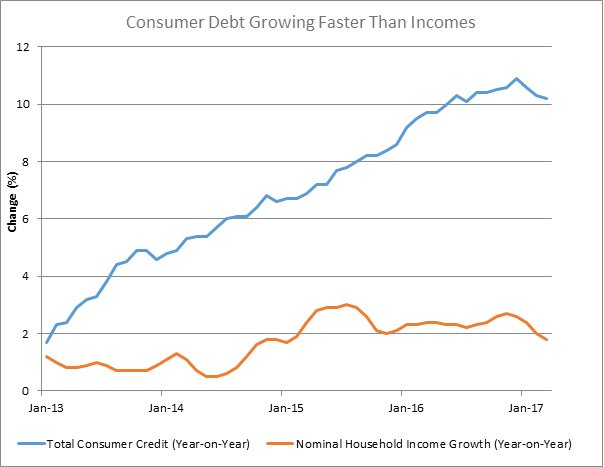 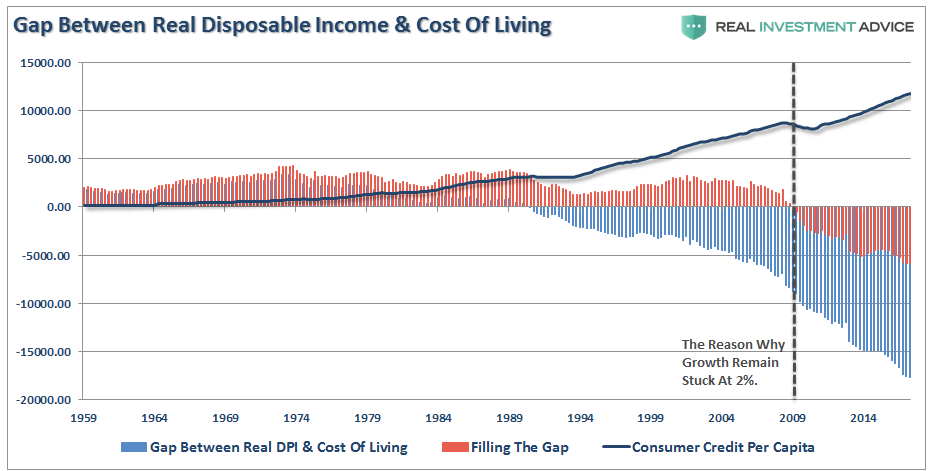 How we pay for a $400 emergency expense… 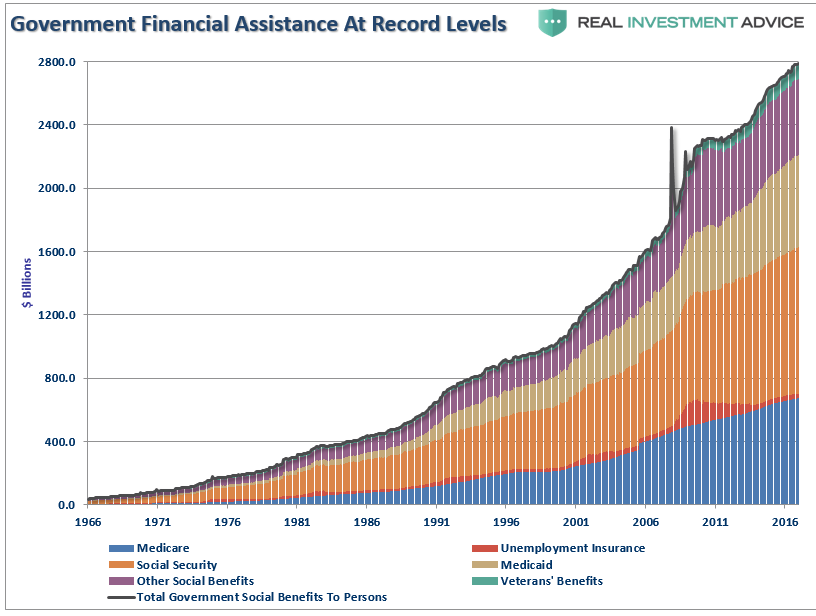 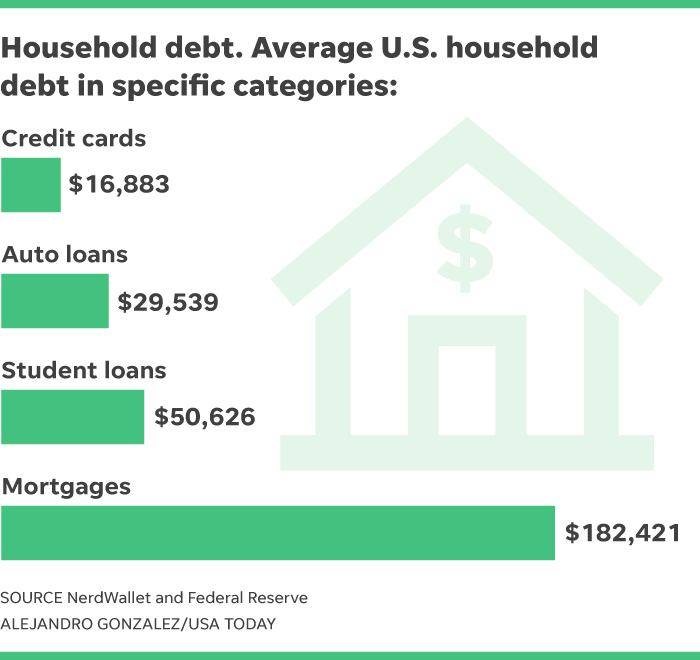 A Foolish Take… “Here’s how much debt the average U.S. household owes in credit cards, auto loans, student loans, and mortgages. Americans credit card debt has just hit a disturbing record of $1.02 trillion according to the Federal Reserve. The average American household carries $137,063 in debt, according to the latest numbers. Yet the U.S. Census Bureau reports that the median household income was just $59,039 last year, suggesting that many Americans are living beyond their means. The cost of living in the U.S. rose 30% over the past 13 years, yet household incomes only grew 28%. As a result, more Americans are using credit cards to cover basic needs like food and clothing. Medical expenses have grown 57% since 2003, while food and housing costs climbed 36% and 32%, respectively. Those surging basic expenses could widen the inequality gap in America, as a quarter of Americans make less than $10 per hour.” – USA Today, Nov. 2017

Helpless, Raging Charlottesville Families Shocked By Horrific 2018 Obamacare Premiums… “Ian Dixon, who left his full-time job in 2016 to pursue an app-development business, did so because the ACA guaranteed that he could still have quality coverage for his young family, he said. But when the 38-year-old Charlottesville husband and father of a 3- and a 1-year-old went to re-enroll this month, his only choice for coverage would cost him more than $3,000 a month for his family of four, which amounted to an increase of more than 300% over the $900 he paid the year before. And this is for the second-cheapest option, with a deductible of $9,200.” – ZeroHedge, Nov. 2017

More older Millennials are living with relatives… “A study of more than 2,000 millennials found that one in five have moved back home for a chance to live their dream or win over that special someone.  The share of older Millennials living with relatives is still rising, underscoring the lingering obstacles faced by Americans who entered the workforce during and after the Great Recession. About 20% of adults age 26 to 34 are living with parents or other family members, a figure that has climbed steadily the past decade and is up from 17% in 2012. There are other reasons more older Millennials are living with relatives. Many are burdened by student debt and can’t afford high rents, especially in larger cities. Total U.S. student loan debt hit a record $1.36 trillion in the third quarter, the Federal Reserve Bank of New York said last week. And with a housing shortage driving up prices in recent years, some people in their late 20s and 30s prefer to live with relatives so they can sock away more money to buy a home, McLaughlin says” – USA Today, Nov. 2017 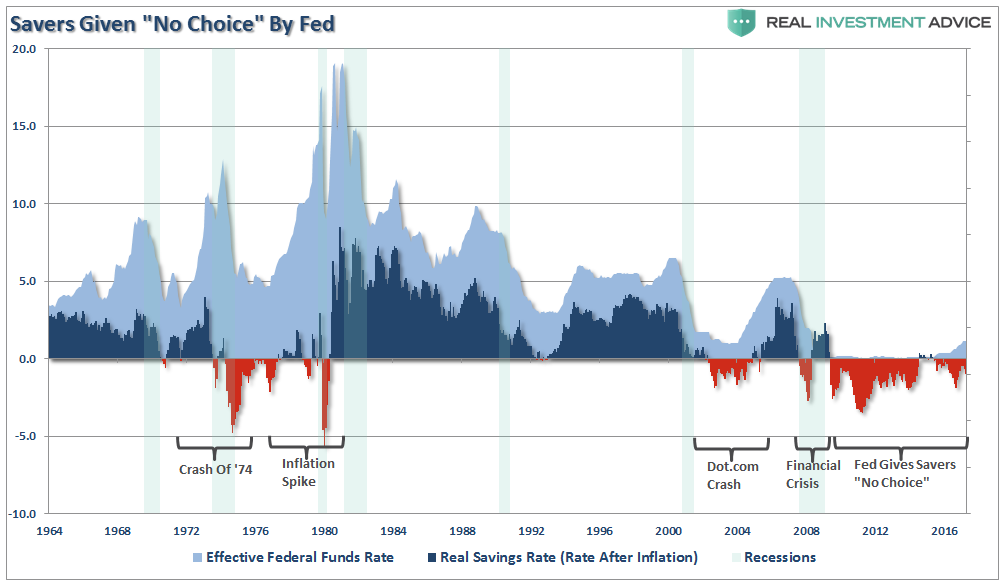 In conclusion, there were times in history where you could put cash into a savings account and earn enough money with no risk and save your way to a decent retirement nest egg.  Nowadays, due the Fed’s financial repression, simply saving for retirement is no longer part of the American Dream.