This will be an absolute game-changer for the entire sector. For those not anticipating the shift, it will be a shocker; for those in the know, it’s further confirmation that this is happening.

This is expected to happen on June 27th.

For the average person who isn’t paying much attention to cannabis research and has older legacy views on it, the FDA signing off on a drug will be a huge endorsement for the entire space.

And I must tell you, the older I get, the simpler my investments have become. It’s just simple theses with simple narratives and anticipating trends. And really, if you can just understand people, you can understand where the flow of people’s habits are going to go, and if your investments are prepared to absorb the demand of human needs and wants, you will be positioned for the greatest amount of success.

Cannabis used to be a major dividing issue, but it’s becoming apparent to people that it’s simply an herb that is less harmful than either alcohol or cigarettes. Alongside these legal substances, cannabis has no reason to be criminalized.

More and more people are realizing this. Shifts in the spending habits of new generations are shaping economics.

Take a look at Campbell’s Soup, a company that was essentially classified in the “health category” when I was growing up. But today, have been much more scrutinized by a more health conscious generation.

Today, because of the wider spread of information and knowledge, millennials are demanding quality and not as many processed and highly-preserved foods.

As a result, the stock has been collapsing. 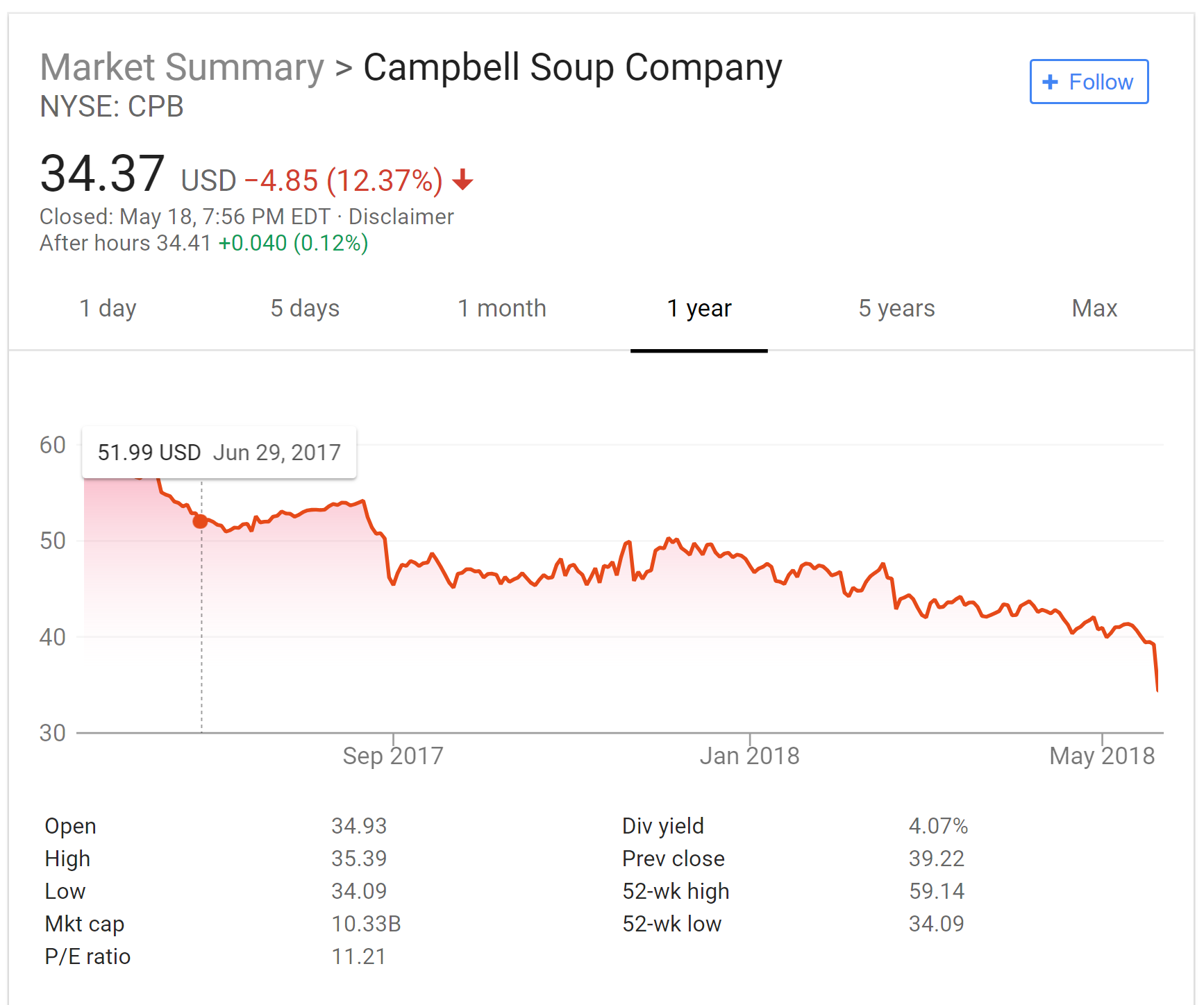 In just one year, the price of the stock has been nearly cut in half.

Why is this? People are understanding that eating foods that can be stored on your shelf for years at a time are probably not healthy for your body. They are shifting towards fresh and frozen foods (which tend to have less preservatives and additives since the freezing process is responsible for the preservation).

What’s ironic is the old mindset of those who are staunchly against cannabis, who probably have no issue stocking their shelves with Campbell’s Soup.

Getting back to cannabis, GW Pharmaceuticals is putting forth Epidiolex, the first cannabis-based drug approved by the FDA for sale in the United States. It’s expected to be among the top 10 largest drug launches of the year.

Yes, this is still on the medical front, but the more people see that there are more benefits than negatives with cannabis, the less they will demonize it, and they will ultimately come around to it.

Even former House Speaker Republican John Boehner has joined the board of a medical cannabis company, saying that his “views have evolved.”

We are just getting into the initial stages of what will become global legalization of cannabis. Sentiment for this space is changing fast.

It’s still unknown what company will be the next deca-billion dollar Anheuser Busch or Heineken Holding of the cannabis space. However, what I can tell you is that when it becomes apparent, it will be a Coca-Cola or Disney-type legacy stock, one that you will be able to pass down to your kids and grandkids because it will be that safe. It’s going to be a Google, Amazon, or an Apple-type situation where the stock seems to just goes up indefinitely, defying gravity right before the eyes of the entire investment community.

I am currently in the vetting process of multiple cannabis plays that could soon benefit from the early-stage environment of significant adoption.