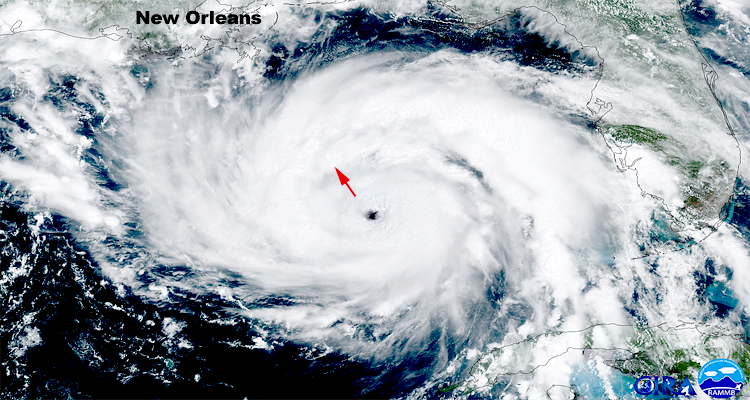 As of 5 AM EDT this morning, the U.S. Naval Research Laboratory (NRL) and National Hurricane Center (NHC) has Ida at category 4 strength with 138 mph sustained winds and gusts of up to 167 mph. Ida is expected to strengthen before making landfall south of New Orleans around midday. You can watch on the ground real-time video at Live Storm Chasing.

“Discussion: Ida has undergone some dramatic inner-core structural changes since the previous advisory. The eye has become circular with a diameter of about 15 nmi now, and at least two eyewall mesocyclones have been noted rotating cyclonically around the eyewall… The result has been rapid strengthening… Air Force Reserve reconnaissance aircraft measured a maximum 700-mb flight-level wind speed of 133 kt in the northeastern quadrant, along with a peak SFMR surface wind speed of 116 kt. Furthermore, NWS Doppler radar velocity data from Slidell, Louisiana, has recently been measuring velocities of 120-130 kt between 25,000-30,000 ft, which is quite rare, and indicates that Ida is a vertically deep and intense hurricane. Ida was initialized with 115 kt at 0600 UTC, but the 0900 UTC advisory intensity has been increased to 120 kt based on the 133-kt flight-level wind and the improved structure in both radar data and satellite imagery since the 0609 UTC time of that aircraft observation. Ida will remain over waters with high oceanic heat content for another 6 hours or so… some additional strengthening is expected until landfall occurs… There is a danger of life-threatening storm surge inundation Sunday along the coasts of Louisiana, Mississippi, and Alabama… Port Fourchon, LA to Mouth of the Mississippi River…12-16 ft… Overtopping of local levees outside of the Hurricane and Storm Damage Risk Reduction System is possible.” 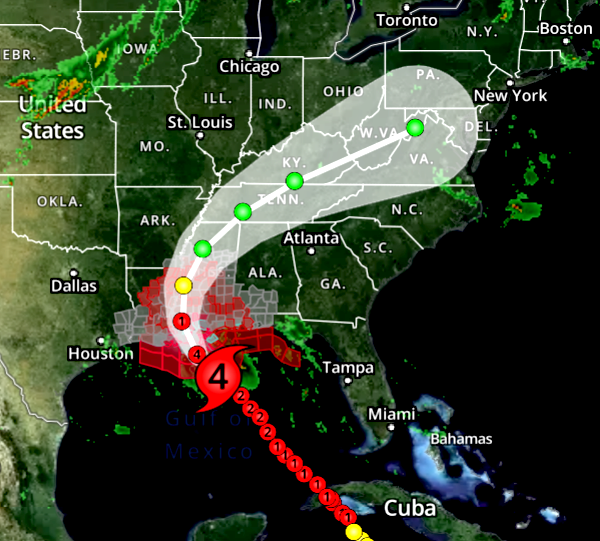 “The Louisiana coastline has experienced more than 60 hurricane strikes since 1851, but only one that brought a storm surge to New Orleans capable of overwhelming the new levee system. That storm was the deadliest hurricane in Louisiana history, the 1893 Chenier Caminanda hurricane, which hit the coast south of New Orleans as a category 4 storm. More than 2,000 people died in that storm, mostly from storm surge.” – Jeff Masters, Aug. 27

On the heels of a “Shipping and Supply Chain Crisis [That] Will Not End Anytime Soon,” energy producers and refiners evacuated production platforms and shut down 91% of volume ahead of Ida. Gulf of Mexico offshore crude oil production is reduced by 1.65 million barrels according to the Bureau of Safety and Environmental Enforcement (BSEE). In addition, 1.89 billion cubic feet of natural gas production (85% of output) is shut down. Louisiana’s 17 oil refineries account for roughly one-fifth of U.S. refining capacity at 3.4 million barrels of crude per day. Current U.S. daily oil consumption is at just under 20 million barrels per day. 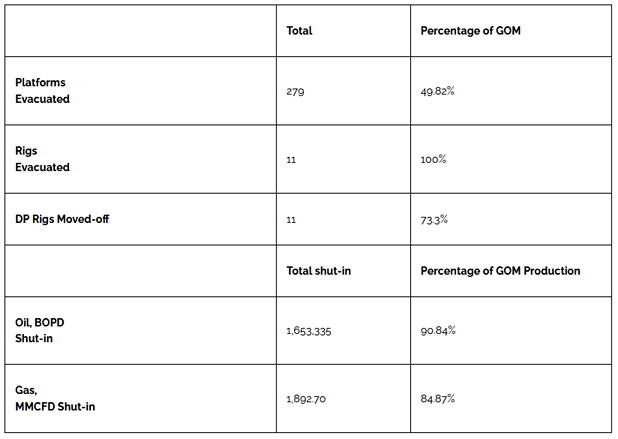 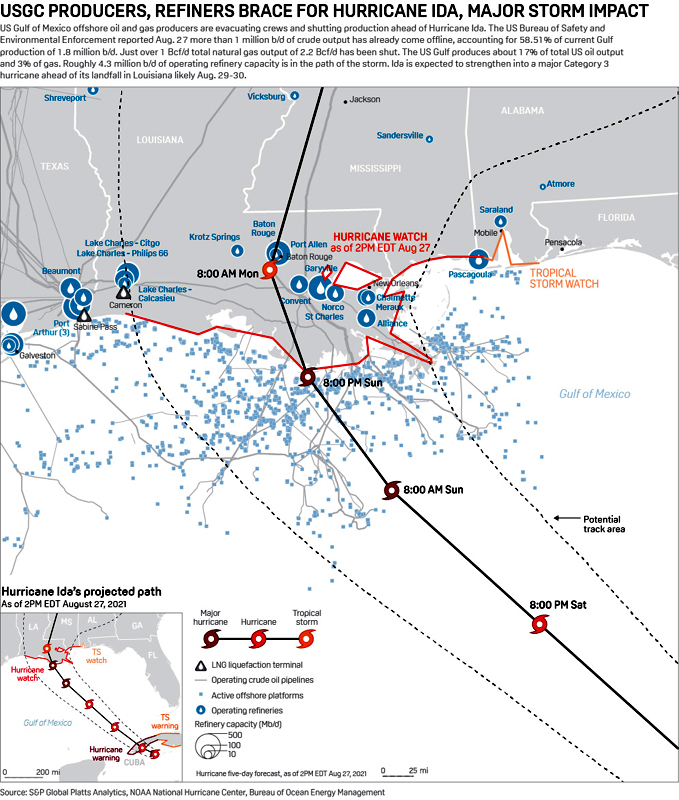 The Gulf is not only a major base for oil and natural gas companies but also a hub for U.S. chemical and shipping industries. About 60% of the gasoline consumed on the east coast originates from the Gulf, with a majority passing through the Colonial Pipeline. Transportation fuel and electricity will likely be impacted along Ida’s path and beyond.

Louisiana is also responsible for roughly 10% of U.S. natural gas (LNG) yields, and its two LNG export terminals ship out 55% of total U.S. LNG. The greatest concern aside from the current halt in energy production and shipping is the potential damage to refineries and petrochemical plants from flooding and storm surges on the Mississippi River between Baton Rouge and New Orleans. The definitive impact on the supply and length of shutdowns is unknown until damage assessments are completed.

“Ida is forecast to move through the absolute worst place for a hurricane.” – Jeff Masters, Aug. 28

GLOBEX Futures will respond on Sunday evening at the 6 PM EDT open, and U.S. stock markets will react throughout pre-market trading hours. Anything related to energy and transportation will be in focus by traders, institutional desks, and hedge funds.

“Andrew Lipow, president of Lipow Oil Associates in Houston, said Saturday that if the New Orleans refineries take a direct hit from a Category 4 storm, gas prices would likely rise by about 10 cents a gallon in the Southeastern and Mid-Atlantic markets.” – CNBC

Retail sales flow and consumer sentiment will likely take a hit nationwide. Major chain store operations are preparing for sellouts and the fallout as Ida rips through the Gulf region and points east of the Mississippi.

“As Hurricane Ida enters the Gulf of Mexico and threatens parts of the U.S., The Home Depot is activating its disaster response team to support communities in the path. More than 250 associates from the company’s merchandising, operations and supply chain teams are working around the clock to move truckloads of products to stores in Louisiana and Mississippi. Products like generators, water, tarps, batteries and flashlights are moving into stores in the area. Stores will remain open as long as it’s safe to do so.  We’re praying for minimal impacts from Hurricane Ida.” – Home Depot

Even if you are not in Ida’s bullseye, prepare accordingly by getting your financial house in order and prep for the existent supply chain crisis while you can. Before jumping on the global warming or climate change bandwagon, consider the following U.S. hurricane landfall data provided by “Big Joe Bastardi. 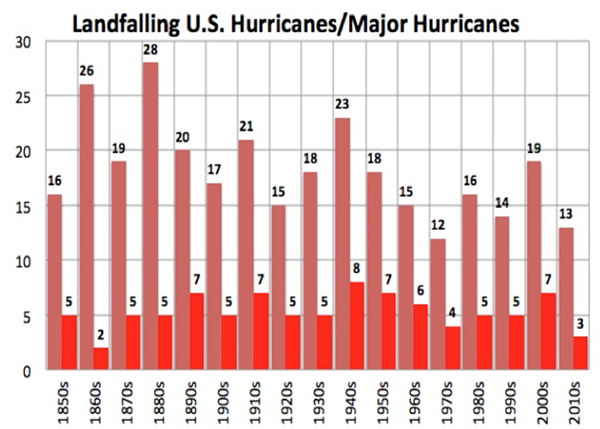 Roughest Neck Around – Corb Lund and the Hurtin’ Albertans 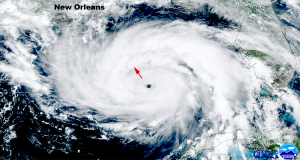