What Impact Will the Dow Jones “Flash Crash” Have?

On the morning of July 11, the Dow Jones Industrial Average took a turn for the worst, briefly dropping 129 points from the open before climbing back up. The benchmark index eventually closed the session at parity from the prior session.

Normally, such incidents would go unnoticed. The magnitude of the mini “flash crash,” as CNBC called it, was less than 1%. In any other market situation, the volatility would simply be pegged to typical market dynamics, and not much else.

Of course, these are hardly normal markets. Geopolitical storms are rising, while domestically, the bitter war of words between Democrats and Republicans seemingly has no end. In the meantime, both our international allies and rivals are jockeying for position amid the uncertainties of a Trump-led White House.

But the catalyst for this latest Dow Jones flash crash was Donald Trump Jr., the eldest son of the President. During an interview with Fox News’ Sean Hannity, Trump Jr. stated that he disclosed email conversations he had with an acquaintance, who claimed to know a former Russian prosecutor with incriminating information about former Secretary of State Hillary Clinton.

Trump Jr. asserted that the actual meeting was ultimately conducted under false pretenses and that nothing of substance came of it. However, the political machinery viewed the implications of the meeting unfavorably, with Citi analysts claiming that the chances of President Trump being impeached — though very small — have gone up since the email disclosure.

But what real impact will the Dow Jones flash crash have on the economy and the financial markets? Interestingly, if the index continues on its overall trajectory, 2017 may go down as the least volatile in recent memory. 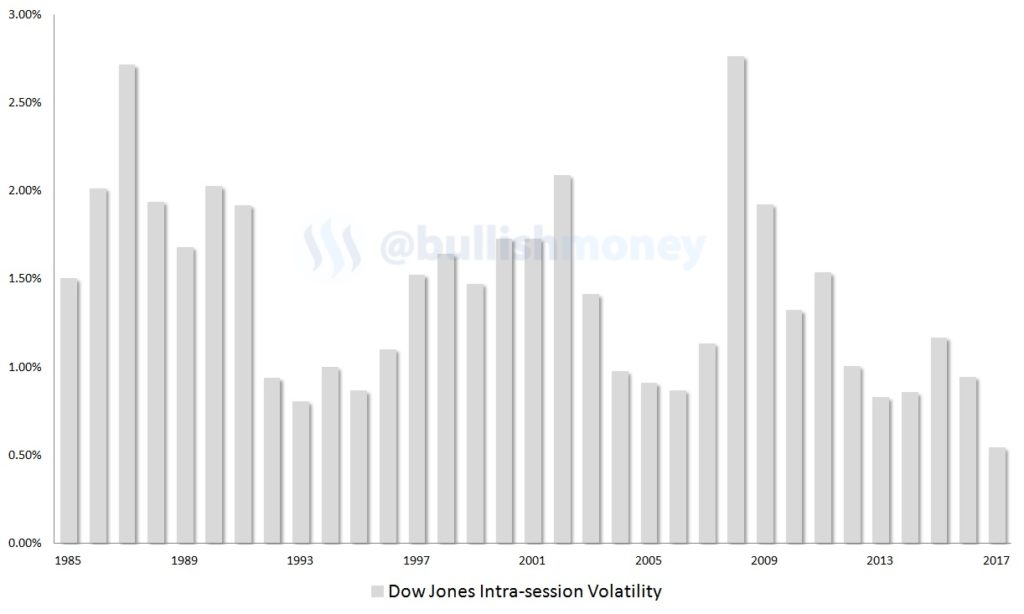 Between 1985 through 2016, intra-session volatility in the Dow Jones averaged 1.45%. In sharp contrast, the volatility so far this year is averaging 0.54%. Magnitude-wise, we’re talking about a differential of nearly 169%!

The kicker, though, is that this year should be the most volatile. Globally, we’re experiencing horrific violence on a daily basis. Both the U.S. economy and the financial markets have failed to substantively recover from the 2008 crisis. Politically, the American people are held hostage by Washington gridlock that will prevent President Trump’s strategies from being implemented quickly.

So I find it extraordinarily strange and disconcerting that volatility in the Dow Jones is, aside from the recent flash crash, subsiding. This brings to mind the gold and silver markets, which are also experiencing record-low volatility, yet have suffered inexplicable selloffs.

While I can’t chart a definitive course of action, I will say that I do not like market metrics that run counter to logical trends. Currently, the precious metals and the equity markets are running at historically low volatility, yet only one sector — the metals — is experiencing nonsensical selloffs.

If anything, the circumstance should be reversed. If the Dow Jones really deserved its premium valuation, consumer sentiment would be flying high. Instead, it has been flat since the start of this year.

Such contradictions worry me. It seems likely that the recent flash crash is a small and early warning of a greater correction to come.