Infrastructure spending is historically popular in gaining bipartisan brownie points when the House and Senate are split between Democrats or Republicans holding a majority on one side of Capital Hill. History may repeat itself, but it sure does not rhyme, and it appears our current politicos have fumbled their way into a pile of manure following the recent midterm election results, along with an already deeply divided politic.

A major sticking point could be a gas tax proposal already floated by both parties to help fund any infrastructure bill, as that was a solution hammered out during the ‘80s and ‘90s. Last time I checked, we are no longer living in Kansas, with the current $22 trillion national debt, $210+ trillion in unfunded liabilities, and continual stop-gap budget measures that keep the government running vs. the better fiscal conditions of times past.

Despite rampant partisanship, there are positive signs from both sides of the aisle for infrastructure spending, but hashing out the details in a political environment littered with landmines the likes we have not seen in decades, all the while traversing a yellow brick road to insolvency, is going to be a delicate maneuver. The POTUS is likely to stand pat with a no tax increase platform due to his tax reform success last year, and the Federal Reserve is not cooperating with his economic policy by raising interest rates into the weak end of a business cycle and encouraging a stronger dollar. What landmine is stepped on first is a tough call, and threats of impeachment and/or continuous investigations by House Democrats are likely to trigger a ruination of the current love fest over bipartisan infrastructure dreams.

On the bright side, the Democrats may not want to risk gains in political capital acquired during midterm elections by raising taxes at the pump on their poorer constituents. On the other hand, they could make any deal an untenable palate for the POTUS and Republicans to swallow, thus succeeding with gridlock and scapegoating the man they openly despise with a vengeance.

Stare at this political message carefully.  What do you see? 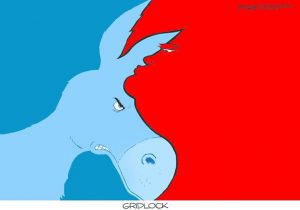 Another fly in the ointment to consider is the American Society of Civil Engineers (ASCE) 2017 study that grades the U.S. infrastructure with a D+ overall. The cost to bring our infrastructure up to speed is enormous. According to the study, “since 1998, America’s infrastructure has earned persistent D averages and the failure to close the investment gap with needed maintenance and improvements.” The estimated cost of leaving our infrastructure in a deteriorating state chimes in at a $3.9 trillion loss in GDP, $7 trillion loss in business sales, and 2.5 million jobs lost by 2025. Looking out to the year 2040, the loss in GDP totals $18 trillion, averaging over $700 billion per year. The investment gap for road infrastructure alone is estimated at $1.1 trillion through 2025 and $3.2 trillion through 2040.

There are significant infrastructure needs both in rural and urban areas, so any plan must address the needs of the country as a whole and not be full of earmark potholes to placate politicos or cow tow to the new House majority who might focus on their megalopolis centered voter base.

There are ten infrastructure sectors:

There is another funding solution being tossed around by financial pundits and analysts: tax-exempt bonds.

Investors speculate on return of crisis-era Build America infrastructure bonds under split Congress… “With Democrats sweeping into the House in the midterm elections, analysts are touting the potential comeback of crisis-era municipal bonds as part of a broader infrastructure bill… After the tax cuts, fiscal conservatives in the Republican-controlled Senate may be unwilling to support another deficit-widening stimulus measure. The budget deficit is on record to widen to a trillion dollars by 2020, according to the Congressional Budget Office. Treasury bond issuance is set to rise to a more lofty $1.34 trillion this year… With municipal issuance muted relative to last year, the demand for tax-exempt yield has largely ensured the success of infrastructure bond deals, meaning there are buyers in abundance and projects are getting funded. According to the Securities Industry and Financial Markets Association, municipal bond issuance is down 14% year-to-date from 2017…” – MarketWatch, Nov. 9

No matter what the Congress critters decide to mix and match for a potential infrastructure deal, do not waste time waiting on the results. Here are a few equities to consider adding to an infrastructure stock watch list.

“Caterpillar is the world’s leading manufacturer of construction and mining equipment, diesel and natural gas engines, industrial gas turbines and diesel-electric locomotives. We are a leader and proudly have the largest global presence in the industries we serve.”

“McDermott is a premier, global upstream and downstream engineering, procurement, construction and installation company. We are also an established provider of industry-leading petrochemical, refining, gasification and gas processing technologies—creating a company that spans the entire value chain from concept to commissioning.”

“Jacobs is one of the largest and most diverse providers of technical, professional and construction services, including all aspects of architecture, engineering and construction, operations and maintenance, as well as scientific and specialty consulting.”

“Martin Marietta is an American-based company and a leading supplier of building materials – including aggregates, cement, ready mixed concrete and asphalt.”

“MASCO is one of the world’s largest manufacturers of brand- name products for the home improvement and new home construction markets.”

“Founded in 1902, The Manitowoc Company, Inc. is a leading global manufacturer of cranes and lifting solutions. recognized as one of the premier innovators and providers of crawler cranes, tower cranes, and mobile cranes for the heavy construction industry.”

“Terex Corporation is an American worldwide manufacturer of lifting and material handling solutions for a variety of industries, including construction, infrastructure, quarrying, recycling, energy, mining, shipping, transportation, refining and utilities.”

“United Rentals is the largest equipment rental company in the world with a customer base that includes construction and industrial companies; utilities; municipalities; and homeowners. In addition to rentals, the company offers new and used equipment sales, servicing, and safety training.”

“Founded in 1901, United States Steel Corporation is an integrated steel producer with major production operations in the United States and Central Europe. Headquartered in Pittsburgh, Pa., we manufacture a wide range of value-added steel sheet and tubular products for the automotive, appliance, container, industrial machinery, construction, and oil and gas industries.”

Here is a story about ordinary people doing extraordinary things by building something real.

Rise: The Story Of The Ironworkers Who Built The World Trade Center Freedom Tower After The 9/11 Attacks 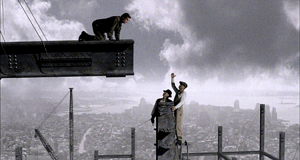