Iran’s “Road to the Sea” Through Damascus is Futile

When you thought geopolitical headlines could not devolve into more chaos, the potential showdown of all showdowns reemerged overnight.

The topic of blood moons also crept back in news headlines, as they have a long history of being associated with major events for the nation of Israel. In 2014 and 2015, a series of blood moons all fell on Jewish holidays, and coincidentally, a newly elected POTUS came to power and reinstituted unwavering support for the state of Israel vs. Obama’s hatred of Jewish sovereignty. Last evening’s super blood wolf moon is the first of three super moons this year, and this one fell on the anniversary of President Trump’s inauguration from two years ago. This full moon gets a “Wolf” added to its name because it appeared in January, when wolves howled in hunger around Native American villages during the winter in North America. There is also a cluster of numerology surrounding this particular eclipse, as the POTUS was born on the evening of Jun. 14, 1946, within 15 minutes of a total lunar eclipse and 700 days before the state of Israel was born. When sworn on Jan. 20, 2017, he was 70 years, seven months, and seven days old. More significantly, the super blood moon occurred above the U.S. on the Jewish holiday of Tu B’Shevat, and another blood moon took place over the Middle East last year on the same holiday.

Many prophecies tied to a string of blood moons have come and gone over the last few years and claimed to be timestamp messengers of upcoming doom. Thus far, they have only resulted in numerological oddities and the election of Donald Trump as POTUS. Do not ignore the significance of his 2016 election win if you consider the state of the union and that of the world left on his desk, and recognizing Jerusalem as Israel’s eternal capital by moving the U.S. embassy there is an end-times mile marker.

The odds of having two blood moons on the same biblical holiday and two years in a row are astronomical (pun intended). A lunar eclipse is a bad omen for Israel when they pass over the country because the Jewish people base their calendar in accordance with the lunar cycle. If the moon is red like blood, the Talmud reads, there will be an “increasing of swords.” Last evening’s super blood wolf moon passed over North America. It is a warning for Jews to return to their homeland, as well as sheds light upon any prophetic implications for the current POTUS.

Senior Rabbi Fish: Super Blood Wolf Moon an omen of ‘human suffering’… “The passing of the super blood moon over Washington D.C. coincided with the beginning of the Jewish holiday of Tu B’Shevat – also known as the New Year of the tree. It also marked the halfway point of Trump’s presidency… the super blood moon is described by the Prophet Joel as preceding the final days of judgment, when ‘portents’ would be set in the sky and on earth, bringing ‘blood and fire and pillars of smoke’… The rabbi said that Western nations were about to experience a very challenging era, where there will be ‘great tragedies that will bring down governments and (create) great human suffering’… His blog shows him suggesting that Trump is the Messiah for the nation of Edom (Christians), while former president Obama was a Messiah to the nation of Ishmael (Muslims).” – The Sun, Jan. 21

The events that transpired over the last 24 hours do not give me a warm and fuzzy feeling inside. The following Middle East update by Amir Tsarfati is worth your time, from timestamp 3:36 to 27:15. It adds some color to the airstrikes on Damascus, the geopolitical dynamic brewing between Israel, Iran, Russia, Syria, Hezbollah, and Israel’s ties to the African continent, all sprinkled with a little prophecy from a different perspective.

What began as a peaceful uprising in Syria nearly eight years ago morphed into a revolution, with the goal of overthrowing the Assad regime. The catastrophe in Syria encompasses international political power plays amidst a powder keg of competing objectives, resulting in a humanitarian crisis that has killed and maimed hundreds of thousands of civilians.

For Israel, their main concern was how Iran might exploit the conflict and construct a frontline through Syria between Iranian-backed forces and Israel. In 2017, satellite imagery revealed that Iran was not just assisting Assad with his military, but was building and stocking warehouses with weaponry to supply Iran’s “road to the sea” corridor stretching from Tehran across Iraq and Syria to Lebanon. The corridor to the Mediterranean would connect Iranian-backed militias based on a Hezbollah model with ties to the Islamic Revolutionary Guards Quds Force.

Russia’s role in Syria evolved as Russian-Israeli political relations warmed lately, while Russia backs the Syrian regime in taking back its country with a few compromises, such as returning Syrian forces near the Golan. Israel appears to be okay with that so far and emphasized that Iranian forces must keep away from its borders.

Israel has carried out at least 200 airstrikes against Iranian weapon transfers in Syria since 2017 and regularly warns Iran not to remain in Syria since the civil war ended. Without exception, airstrikes on Iranian targets are carried out secretly with or without taking responsibility for anything specific at a later date.

The airstrikes against Iranian military targets around Damascus on Sunday and Monday exposed a new Syrian battlefield as its civil war ends, ISIS is eliminated as a land occupier, and the U.S. prepares to slowly withdraw its forces. Israeli authorities stated that the targets were munitions storage facilities, an intelligence site, and a military training camp. Such admissions from Israel are rare. Israel is more open to striking Iranian targets and taking responsibility for them immediately, as well as taunting Iran in a public forum. 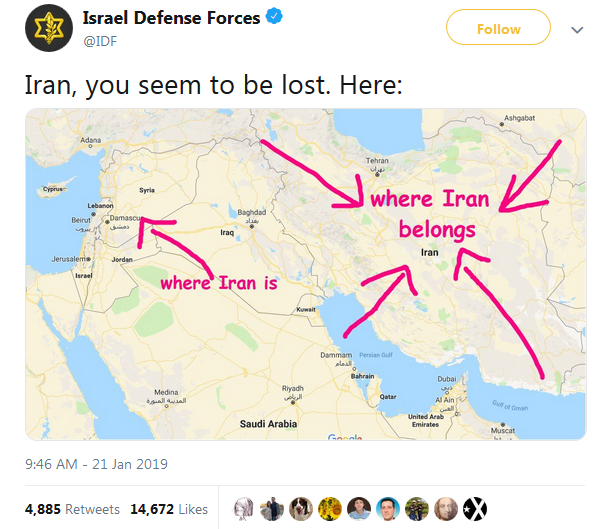 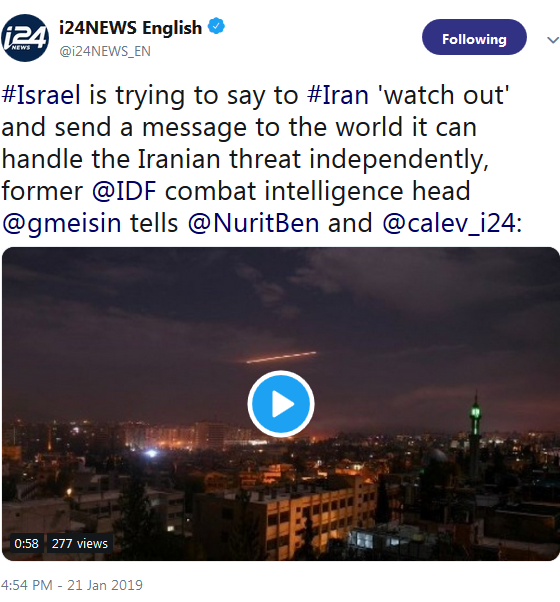 In response to the airstrikes, Iranian Brigadier Nasirzadeh released a statement via state television that foments fear of an open conflict in the Middle East between Iran and Israel. “The young people in the air force are fully ready and impatient to confront the Zionist regime and eliminate it from the Earth,” he said.

Apocalypse Now – Ride of the Valkyries

Iran’s ‘Road to the Sea’ Through Damascus is Futile

Iran’s ‘Road to the Sea’ Through Damascus is Futile