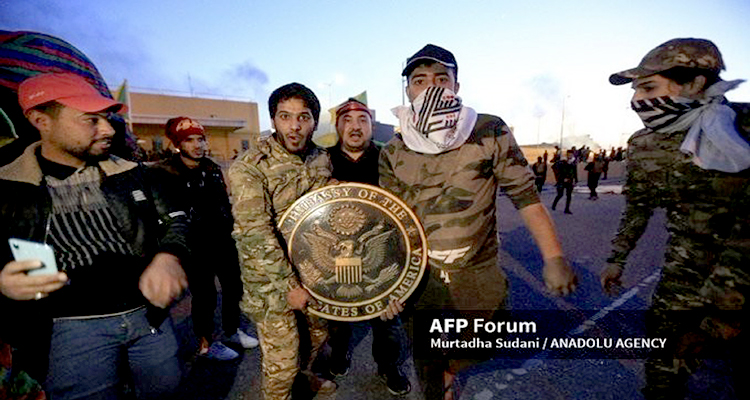 This morning’s spike in the price of oil was widely reported as supply dynamics due to Biden’s incompetent energy policy and the Saudi pivot with OPEC+ members aligning with the kingdom. Those circumstances did not explain why oil hadn’t rallied sooner in its price pullback since mid-June when those same variables were firmly in place. The following excerpt clarifies the situation.

“Saudi Arabia is increasingly more aligned with Russia than with the US on the global stage. And both need higher oil prices. The Saudi Oil Minister Prince Abulaziz bin Salman recently spoke of the ‘self-perpetuating vicious cycle of very thin liquidity and extreme price volatility’ in oil markets, and how it has been ‘amplified by the flow of unsubstantiated stories about demand destruction, recurring news about the return of large volumes of supply, and ambiguity and uncertainty about the potential impacts of price caps, embargoes, and sanctions.’ The Saudi Prince was alluding to the Biden Administration’s rampant intervention in oil markets. From the Saudi perspective, President Biden’s climate-first policies have thwarted upstream investment since he took office.” – Indian Punch Line, Aug. 25

If you assessed the state of global financial markets while scrolling a few headlines and drooling over your early Monday cup of coffee, it was clear that OPEC, Russia, and Biden were irrelevant factors. It was renewed political upheaval and the potential for civil war in Iraq that spiked the price of oil this morning and ended with a 4% gain at the NYSE close. Additional reports and videos of the United Nations office evacuating personnel and helicopters on the U.S. Embassy roof amid live fire in the Green Zone must have elicited a Vietnam or Afghanistan déjà vu experience.

Hints of anarchy centered around Baghdad, and claims of pro-Iranian interference after Muqtada al-Sadr’s resignation have added a premium to the cost of production for a barrel of oil. Iraq is the #5 black gold producer in the world.

Embassy in Iraq has been ‘evacuated‘ – Michael Yon

“The militias of Saraya al-Salam have arrived at the Green Zone to protect the protesters said to be supporters of the Sadrist Movement.” – BasNews 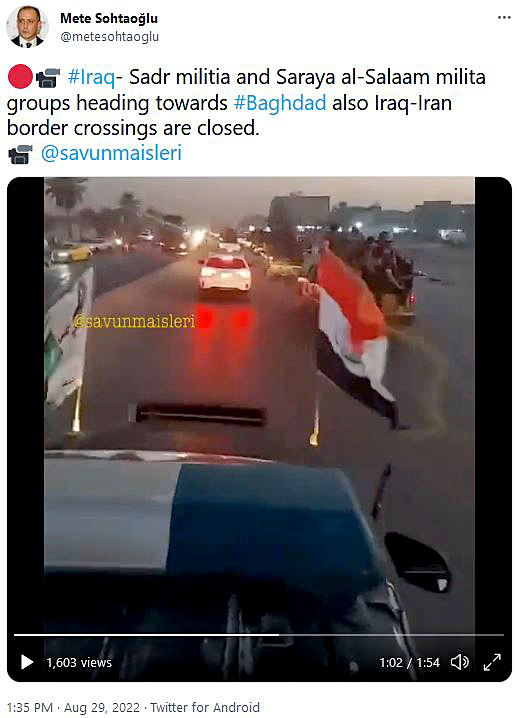 At least 12 people have been killed and 270 injured today after clashes erupted between Iraqi security forces and followers of Muqtada al-Sadr in Baghdad’s heavily fortified Green Zone. Protests are also taking place in the town of Al Amarah near Iran and the southern provinces of Dhi Qar and Basra, where the Iranian consulate was stormed and security forces fired live ammunition. Babil Road and all southern routes leading into Baghdad are closed, flights in and out of the airport are suspended, and the Joint Operations Command (JOC) declared a nationwide curfew that will be implemented this evening.

The Iraq military is seen as politically neutral and is caught in the middle of a rivalry between al-Sadr as a nationalist (Shiite) and the Coordination Framework with pro-Iran (Sunni) factions. The Coordination Framework coalition is linked to U.S. designated terrorist groups including Kata’ib Hezbollah. Sadr’s supporters say that gunmen in Iran-backed militias fired on crowds in the Green Zone. Prime Minister Mustafa Al-Kadhimi has called on al-Sadr’s followers to withdraw from government buildings, respect security forces, and leave the Green Zone in peace.

Iraq has been in a political deadlock since national elections last October after al-Sadr’s political bloc captured 73 seats in the 329-member assembly. He was always critical of a “unity government” with Sunni factions. Since the end of July, his followers were encamped around parliament and inhibited access to various government facilities. In the eyes of his pro-Iran political opposition, they are obstructing the formation of a new government that’s been in shambles for months. Al-Sadr claims that the Coordination Framework committed election fraud and demanded parliament be dissolved and hold early elections. Al-Sadr often criticized his fellow Shiite leaders for failing to heed his calls for reform.

“I decided not to interfere in the political affairs. Now I announce my final retirement and the closure of all institutions, except for the Holy Shrine, the Sharif Museum, and the Al Sadr Heritage Institute.” – Muqtada Sadr, Aug. 29

Sadr has exited politics in the past. When Iraq was fighting ISIS in 2014, he said he would resign from politics to “preserve the good name of the Al Sadr family and avoid sedition inside and outside Iraq.” In June 2021, he threatened to close the office of his political cohorts and not participate in the fall election. He and his following returned with significant support in polls after a nationwide protest on voting processes. Al-Sadr’s current announcement to “finally” retire from political life might carry more weight than his previous exits.

Iraq chaos as al-Sadr supporters storm Green Zone after he quits… “Hamzeh Hadad from the European Council on Foreign Relations questioned the motivation behind al-Sadr’s move. ‘It’s not quite clear what is he resigning from. Is he asking the other members of his party that hold bureaucratic positions in the state to resign? That’s to be seen,’ Hadad told Al Jazeera. ‘He has done this many times and usually when he does claim to be withdrawing or resigning from the political system, it’s usually before elections and he always ends up backtracking. So, the question again here is ‘Will he backtrack as well?’ Monday’s announcement came two days after al-Sadr said ‘all parties.’ including his own, should give up government positions in order to help resolve the months-long political crisis, while calling on those who ‘have been part of the political process’ since the United States-led invasion of the country in 2003 to ‘no longer participate.’” – Al Jazeera, Aug.

Time will tell what the near future of Iraq will be. If today’s chaos morphs into more violence and political turmoil, it doesn’t bode well for Western economies that are dealing with economic hardship and high inflation that’s attributed to record-high prices for energy.

Entifadh Qanbar: “Every Iraqi Shia city has a complete meltdown of security forces who refuse to kill their own people.” – i24 News 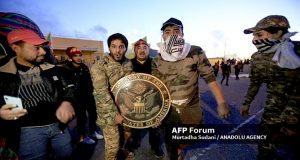