Is the Ripple Price Manipulated?

A common motivation for investing in cryptocurrencies is monetary decentralization. Without a centralized authority, blockchain-related assets are less prone to manipulation. That said, some cryptocurrencies, such as Ripple (XRP) have aroused understandable suspicion.

Unlike white papers explaining the end goal of most blockchain reward tokens, XRP founders made it known from the onset that they seek to work with the bankers. Rather than offering an alternative to the fiat-currency system, Ripple instead “gives” the blockchain technology to banking institutions.

This is the central concept: You can’t beat them, so why not join them?

Understandably, that has raised crypto advocates’ ire. If the free market doesn’t determine the Ripple price but instead a centralized authority, what’s really the point? XRP critics call the crypto coin a cop-out investment. I don’t want to jump in on the debate, but I see their point.

But are those who maintain suspicion towards the Ripple price justified in their leeriness? As it turns out, the data indicates that crypto advocates should remain vigilant against XRP.

If you’ve followed my recent work on Crush The Street, I’ve written fairly extensively about Benford’s Law. In a nutshell, numbers tell a story. When numerical patterns within a data set don’t fall within the expected storyline, it may signal abnormalities.

This is exactly what I see with the Ripple price. Granted, I had to make modifications to my Benford analysis since XRP has traded in the sub-dollar and even sub-cent territory. But even with the necessary adjustments, the frequencies just don’t align with expectations.

In 2017, the Ripple price had almost no correlation with expected Benford frequencies. The calculated correlation coefficient was a meaningless -22%. 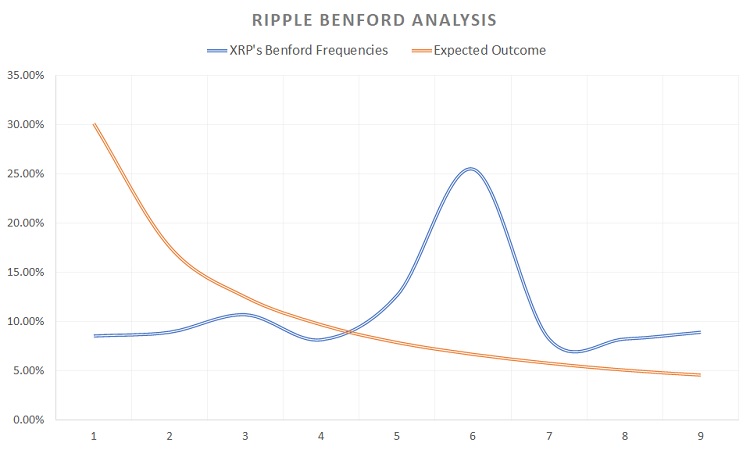 Interestingly, the third number after the decimal point routinely came up as “six.” That’s usually not random, as six is five digits after the most common numeral, one.

Next, we have data from the year so far. The correlation between actual and expected Benford frequencies is again not useful at -33%. More importantly, the most-represented digit and the least-represented digit features a gap of less than 51%. That means the Ripple price features evenly-distributed numerical frequencies, which again is usually not a random phenomenon. 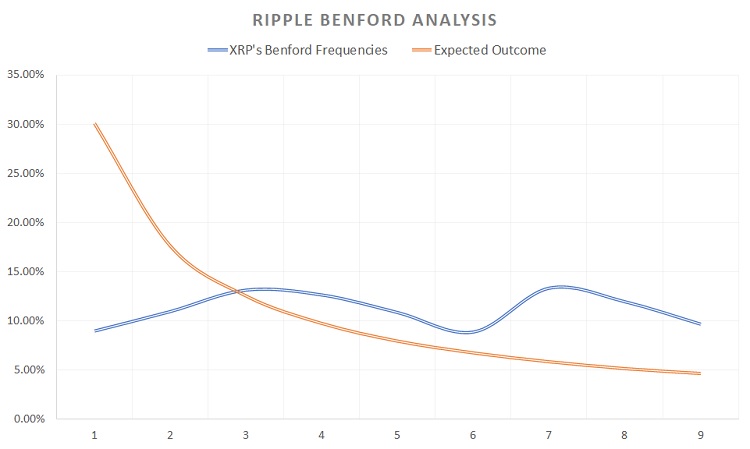 But does that mean that the Ripple price is definitively manipulated? I can’t say that. All I can do is follow the evidence, and keep a watchful eye.

Still, investors shouldn’t entirely dismiss the unusual frequencies found in XRP. Like I said earlier, it pays to be vigilant.