Jumpin’ Jack Flash is Out of Gas in the U.K. 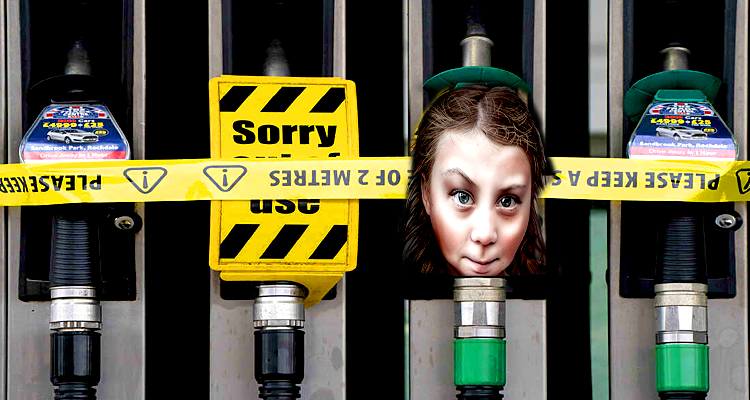 The U.K. fired up a coal power plant in early September after its renewable energy grid of dreams failed to generate enough power to sustain electricity demand and the price of natural gas and electricity were soaring. In 2020, coal contributed about 1.5% of the country’s electricity grid vs. 25% five years ago. The government and National Grid ESO had dedicated their efforts to phase out coal power by 2024 and reduce carbon emissions but would still utilize coal if it was cheaper than natural gas or renewables were not viable. I can hear the echoes from Greta as she glumly preaches “how dare you” while Britain’s plebes stampede petrol stations and die in their Crockett & Jones boots with no heat this winter. 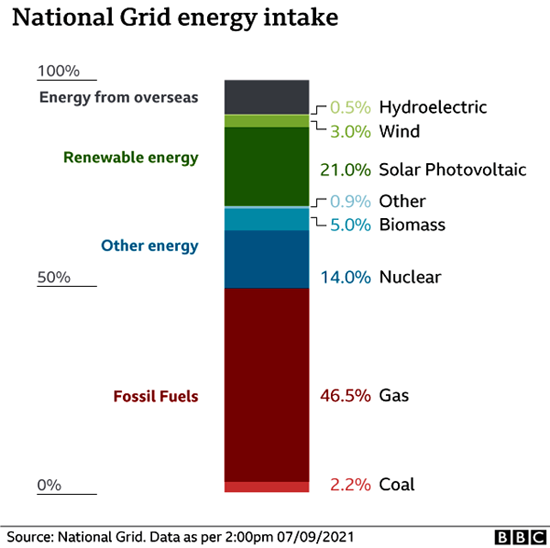 European Gas, Power Prices Jump Again to Records… “Europe’s energy crunch deepened after China ordered its state-owned companies to secure supplies for this winter. Pipeline auctions also signaled restricted flows from Russia. Gas and power prices surged to records as the fight for supplies is set to intensify. China’s Vice Premier Han Zheng, who supervises the energy sector, told state-owned energy companies to get hold of supplies at all costs, according to people familiar with the matter. The news came just as no extra pipeline capacity was booked to deliver gas to Germany’s Mallnow compressor station via a key link to Russia. A global energy crunch is leaving Europe scrambling for gas and coal, with stockpiles of both commodities depleted after the last winter was colder and longer than usual… there are few signs the situation will improve anytime soon as demand continues to roar back from a pandemic-driven lull.” – Bloomberg, Sep. 30

Europe’s Gas And Power Prices Hit New Records… “The gas price at the Dutch TTF hub, the benchmark gas price for Europe, soared by 13.4 percent to 98.23 euros per MWh on Thursday, while the price at the UK National Balancing Point (NBP) virtual trading point reached another record high, jumping by 17.4 percent to 252.53 pence/term… Coal prices are also surging amid a tight global market supply with Chinese demand booming and with high EU carbon prices.” – OilPrice.com, Sep. 30

Making matters worse, the U.K.’s energy supply chain took an additional hit this week when petrol station tanks ran dry and the media demonized citizenry for “panic buying” the last drops of gasoline across the country. All is not as it appears because this gasoline run was precipitated by a shortage of 100,000 lorry drivers that deliver fuel to petrol stations. The trucker shortage was caused by a combination of pandemic fallout, Brexit passport issues for European Union (E.U.) truckers, tens of thousands of drivers returning to the E.U. following Brexit, and at least 40,000 lorry driver training tests canceled due to repeated lockdowns since the pandemic began. Truckers had warned the British Prime Minister that the availability of everything from gas, food, and Christmas gifts will be a nightmare and price inflation will rise substantially.

UK lorry driver crisis ‘vindicates’ warnings about speed of Brexit process… “Thousands of British petrol stations ran out of fuel due to panic buying on Monday, after days of long queues at pumps caused by the lorry driver shortage. Analysts say that, in addition to Covid, the speed of the Brexit process bears a lot of responsibility for the crisis – signaling a broader problem in which the rapidity of Britain’s divorce from the EU is impairing the government’s plans to restructure the economy. The UK’s lorry driver shortage reached a critical point on September 27 – as hoarding ran thousands of petrol stations dry and ample fuel supplies remained stuck in terminals.” – France24, Sep. 27

New border regulations will multiply existing issues as post-Brexit freight and labor from the E.U. are subject to new immigration and identification rules beginning in October. Freedom of movement will end and E.U. identification cards will not suffice as proof of identity. The U.K. and E.U. bureaucracy must sort out this mess with at least a temporary relaxation on ID/passport/visa requirements that will assuage some drivers to return to the U.K.’s transportation industry.

UK warned visa plan to fix truck driver shortage will not solve crunch… “Britain’s decision to issue temporary visas for 5-10k foreign truck drivers is a short-term fix that will not solve the acute labor shortage that risks major disruption for retailers in the run-up to Christmas.” – Reuters, Sep. 26

The UK Fuel Crisis Is Dumber, Pettier, and Worse Than You Could Imagine… “The U.K. is reliant on truck imports, a lot of which (99%, in 2019) come from EU countries. Which is complicated, if you haven’t brokered a particularly good trade deal. Of course, non-truck imports like sea freight also get distributed around the U.K. by truck, which is complicated, if 14,000 truckers who are EU citizens left the country last December. In fact, there’s now nearly 100,000 total fewer truck drivers in the U.K. (236,000 from 330,000) compared to 2016.” – The Drive, Sep. 30

The U.K.’s plan for its military to deliver gasoline to petrol stations may temporarily relieve the gasoline shortage at petrol pumps but other supply chain issues will not improve until cross-border issues are successfully addressed this weekend. The situation is quite serious, and videos have surfaced of motorists fighting at petrol stations over fuel.

In the meantime, prices for LNG, crude oil, shipping, food, and nearly every necessity that Greta can dream of are spiking as the pandemic and asymmetric supply chain issues continue. The current price for one liter (3.785 liters = one gallon) of regular gasoline in the U.K. is USD$1.85 on average, which is not far from the Apr. 2012 record high of $1.91. Nine energy suppliers in the U.K. have already shuttered their doors due to operating at a loss with soaring wholesale energy prices. Don’t expect the cost of energy to decline across the globe anytime soon, and crude oil printed $81 per barrel today, its highest since Sep. 2018.

Jumpin’ Jack Flash is Out of Gas in the UK 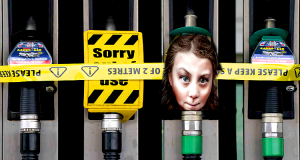 Jumpin’ Jack Flash is Out of Gas in the UK