When the housing market began to exhibit stress prior to the financial collapse in 2007, I authored a housing bubble blog during my spare time documenting what I found.  As each month flew by, the morsels of data creeping out of the cracks from back office banking and mainstream media turned into a flood.  We all know how that story ended –  or do we?  The TV and print media told me it was the sub-prime borrowers’ fault.  Those pesky peasants wanted a roof over their head so they could own instead of rent but couldn’t afford it  and then colluded with shady mortgage brokers that were popping up like dandelions in the spring. Well, not exactly. Ultimately, it was derivatives that busted that bubble.

In my opinion, a movie that cuts to the chase about the machinations that took place before the crash was released in 2015 and based on the book by Michael Lewis called The Big Short.  If you haven’t had the pleasure of viewing the film by now, here is a teaser…

Lately, I’m thinking we may have a new story brewing in housing. I am by no means an expert when it comes to navigating the mouse maze of data and statistics, so forgive me for not crossing every T or dotting every I in this short post.  The complexity is enormous and the symptoms are numerous. The current dilemma in housing is just one symptom. Why have we had the 3rd straight monthly drop and 2nd straight annual decline in pending home sales?

If the economy, jobs, stocks, and housing markets are so hot that the FOMC finds it necessary to raise interest rates, why are pending home sales basically flat for the last 2.5 years and why is available inventory falling?  I’m scratching my head.  It must be because… 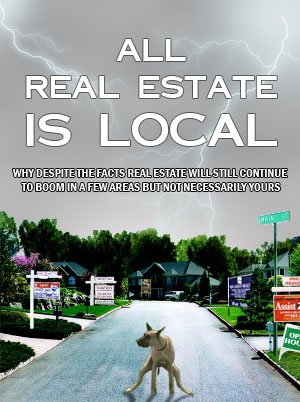 Guess not.  What about “nesting as investing?”

“Nesting is investing” as home improvement spending set to hit $321 billion… “Home equity is back, and headed for the bathroom — or the kitchen or the garage or wherever today’s homeowners see the greatest returns. Higher home prices have given people cash back and they are putting that cash to work in more — and bigger — remodeling projects. “By the middle of next year, the national remodeling market should be very close to a full recovery” – Realty Check w/Diana Olick at CNBC, July 2016

Could it be that since home prices have soared back to the bubble levels, folks are running to banks, looking to take out home equity loans?  I’m not so sure about that…  chart via St. Louis Fed

But folks are definitely fixing up the house and staying put for now, just as they’re fixing up the used car instead of buying a new one. And it seems most prefer to use credit cards for home improvements.  I’m not kidding…

Home Improvement Spending On the Rise… “There may be economic uncertainty and turmoil these days, but apparently, we Americans will not let that get in the way of our home improvement projects. According to the recently released HomeAdvisor 2017 True Cost Report, homeowners are spending approximately 60% more on home improvement projects as compared to a year ago… How will these projects be funded? The vast majority of homeowners plan to do so with cash. The study found that just less than 1 in 5 home improvement projects require alternate financing. A surprising 45% of homeowners who will finance plan to use credit cards – a risky proposition given the relatively high interest rates and increased chances of racking up interest charges…

A HELOC is well suited for home improvement projects because of its relative flexibility and generally lower interest rate. HELOCs were the choice of 22% of study participants planning to finance their projects.” – Money Tips, May 2017

Could it be that affordability and wages vs. price and lending requirements are flattening sales and sucking away inventory?  How do you feel about the economy, despite any numbers the TV and print media are dishing out?  How much money or capital do you have, need, owe, or want to keep?  What will be the return on your investment?  Feeling a little trapped, maybe?

Supply of Affordable Homes Expected to Shrink… “Simply put, they can’t afford the price or save enough money for the down payment… the National Association of Realtors and Realtor.com finds that homebuyers at many income levels could find “an inadequate amount of listings on the market within their price range” in the coming months. “Affordability is becoming much more challenging,” said Lawrence Yun, NAR chief economist. “Home prices over the past five years have risen by 40 percent while income has only gone up half that rate, so on just the price and growth differential, there are affordability challenges.” – NBC February 2017

Pending home sales tumble as supply crisis hits sales… “While about 80 percent of current homeowners think now is a good time to buy, they are not listing their homes for sale. This may have more to do with weakening affordability than anything else. They don’t want to sell if they can’t afford a move-up home.” – Realty Check w/Diana Olick at CNBC, June 2017

U.S. Home Inventory Hits Record Low Since Housing Market Began Turnaround in 2012… “…persistent and disproportional drop in starter and trade-up home inventory continues to make homeownership less affordable – especially for first-time buyers… A strong recovery may be partly to blame for the large drop in inventory some markets have experienced over the past five years. Housing markets – including San Francisco, Seattle, Nashville, Tenn. and Colorado Springs, Colo., – which have had greater home value recovery since 2012 have experienced larger decreases in inventory.

In other words, not only are buyers in the hottest markets likely to be priced out, potential sellers may be locked in to their existing homes.” – Trulia, March, 2017 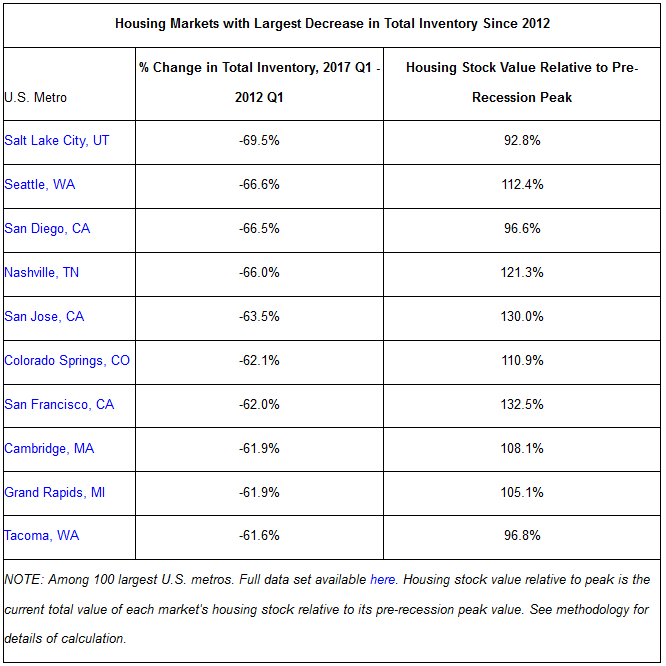