How I Learned to Stop Worrying and Love Platinum Bullion

Over the last few years, the story surrounding precious metals is largely a frustrating one. Despite geopolitical fears and amid economic uncertainty following the 2008 financial crisis, gold prices — the ultimate barometer of safe-haven demand — largely challenges multi-year lows, not the other way around. So why am I suddenly singing the praise of platinum bullion?

After all, platinum prices are the poster child for weakness and volatility in precious metals. One of the rarest commodities on Earth, the “other” white metal first slipped to below the $1,000 threshold following the 2008 collapse in the second-half of 2015. Today, platinum bullion fares no better. At these rates, the asset hasn’t progressed since December 2008.

That’s a mighty big indictment of platinum prices. The worst part is that the metal doesn’t have the convenient explanations that gold prices leverage. For example, the manipulation argument is substantially weak for platinum bullion, as the asset was never used as an index for economic strength or market sentiment shifts.

Furthermore, platinum falls under the category of industrial precious metals. Its market valuation is based on manufacturing demand, primarily, for catalytic converters. Given that the automotive industry suffers from broad headwinds, it appears to be a bad time to invest in platinum bullion. 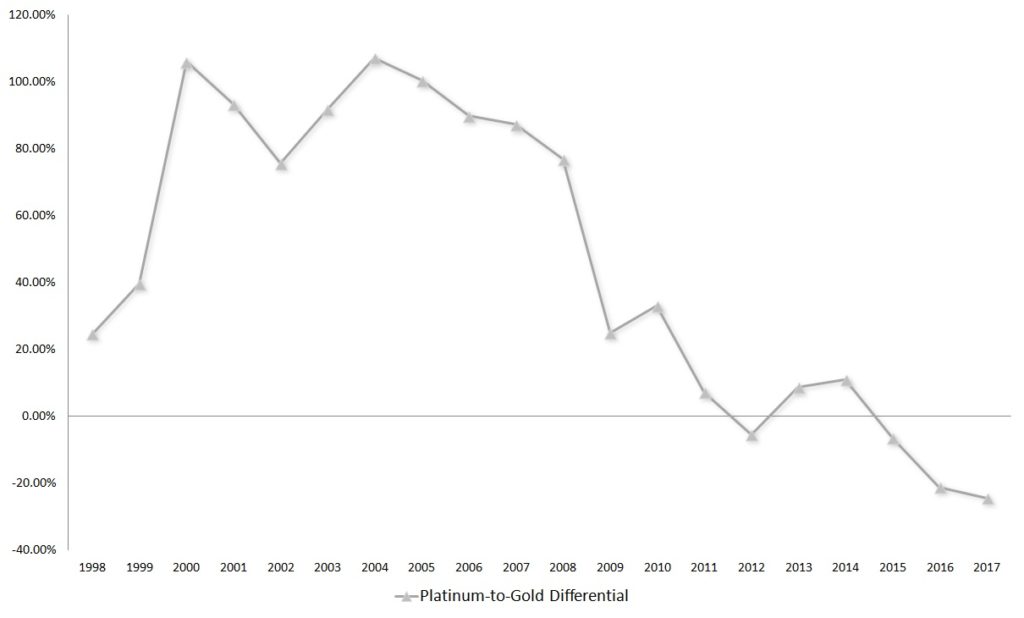 But as I mentioned previously for Crush The Street, “All the platinum that has ever been mined in the world would fit into an average-sized living room. All the gold that was mined throughout history would fit in an Olympic-size pool.” More critically, since 1998, platinum prices average nearly 47% higher than gold prices.

Why then is platinum bullion trading more than 24% lower than gold prices year-to-date?

In fact, the undervaluation of platinum relative to gold is a recent phenomenon. Between 1998 through the end of 2011, platinum prices exceeded gold prices by a wide 68% margin. But starting from 2012, the paradigm shifted dramatically. Over the last six years, the platinum-to-gold differential averages -6.3%.

For a commodity that’s overwhelmingly rarer than gold, this dynamic makes absolutely no sense. And when platinum prices reached around $918, I took the plunge and initiated a long position on the metal.

To be frank, it’s been a long time since I believed in the precious metals, at least when it comes to owning the actual asset, and not mining shares or other associated investments. But the egregious trading fiasco in platinum bullion can’t last forever.

It simply flies in the face of fundamental economic logic.