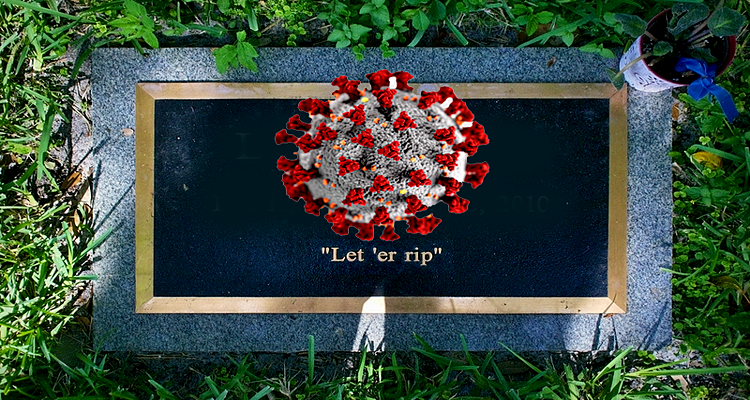 I write this installment to continue a novice attempt at a branch of epidemiology as it applies to investigative journalism in documenting the novel coronavirus SARSCoV2 (aka COVID-19) pandemic from a remote “safe space” in the mountains of New England. I sincerely hope my efforts have not been in vain and encouraged at least a few souls to be prudent in prepping.

“By definition, epidemiology is the study (scientific, systematic, and data-driven) of the distribution (frequency, pattern) and determinants (causes, risk factors) of health-related states and events (not just diseases) in specified populations (neighborhood, school, city, state, country, global). It is also the application of this study to the control of health problems.” – Principles of Epidemiology, 3rd Edition

There are innumerable hours I devoted since early January to stay abreast of global media reportage and citizen investigators while digesting interviews of behind-the-scenes seasoned virologists, navigating opinions from a myriad of medical industry professionals and first responder experiences, the reading of medical journals that are bewildering at times, and plugging it all together to make sense of the viral plague that has impacted everyone in some way. Keeping an even keel while deciphering the pandemic’s fallout while steering through a minefield full of wild animal cuisine, bioweapon rabbit holes, false narratives, political biases, and ascending the learning curve that a novel virus imparts upon everyone is a brutal road to being humble. Improvise, adapt, and overcome or a herd may trample you into submission. The following quotes, articles and interviews that were exclusives for CrushTheStreet, and my subsequent Twitter threads that followed, are listed below for your perusal.

Human-to-Human (H2H) Transmission Confirmed in Novel Coronavirus Outbreak… “‘It has been confirmed that two people in Guangdong province were infected through H2H transmission,’ said Zhong Nanshan, MD, in a CCTV news conference reported on by China Daily. Zhong was the pulmonologist who discovered severe acute respiratory syndrome (SARS) in 2003.” – ContagionLive, Jan. 21

“There is nothing, zero data that says anything about the Italian strain-lineage mutation getting milder (less virulent or deadly)… There is not one gene-sequence change (GISAID’s COVID-19 Phylogeny) that anyone can point to that says it is… There are a bunch of people that know nothing about sequences, don’t have a clue, and are misrepresenting the current situation, because they are not hands-on, don’t know how to read a sequence, and are senior people that kinda heard about it, and didn’t really get the details, and they go out and try to adlib it… the highest level scientists.” – Dr. Henry Niman Ph.D. Virologist, July 3 (14-minute audio)

Today’s topic is herd immunity. A path to that fantasy at such an early stage of this pandemic is wrought with ugly consequences. Herds can be run off a cliff when blinded by trees instead of seeing the bigger picture of the forest.

The Buffalo Jump from Into the West

NIH chief: Trump has not met with White House COVID-19 task force in ‘quite some time’… “instead gets his information from Vice President Pence and task force member Scott Atlas, neither of whom are infectious disease experts… Most controversially, he has praised the herd immunity strategy outlined in a document called the ‘Great Barrington Declaration,’ which calls for allowing the virus to spread among lower-risk, younger people to build up immunity while having ‘focused protection’ on older, high-risk people.” – The Hill, Oct. 20

Before discussing herd immunity, take note of the following comparison between a chart from the 1918 Pandemic that shows three waves of excess death (view current excess death data in U.S.) in New York, London, Paris, and Berlin. When you juxtapose that chart with the current COVID-19 cases in New York, the U.K., France, and Germany, the repetition of the wave pattern is obvious. The 100-year discrepancy between city- vs. country-wide data is likely relative, as the population metric in 1918 was metro-centric and I do not have individual city data immediately available for this comparison. With all things relative or equal, this comparison is likely close to accurate and serves the purpose of pointing out the similarity in the transition from a Herald Wave (the first wave) into a second wave. Notice the timeframe where Paris began its initial ascent during mid-August into a second wave vs. France this year. Also worth mentioning is how Berlin experienced a secondary peak in their Herald Wave during the summer and that is reminiscent of what occurred in regions of the U.S. this year. There are numerous underlying variables that are clearly different today, such as the prevalence and speed of international travel and the geography of where and how the flu originated in 1918 vs. today’s more virulent coronavirus with modern medicine’s ability to test, identify, and more effectively treat disease with therapeutics. Despite those differences, the historic parallel in wave dynamics during a novel disease pandemic is stark. 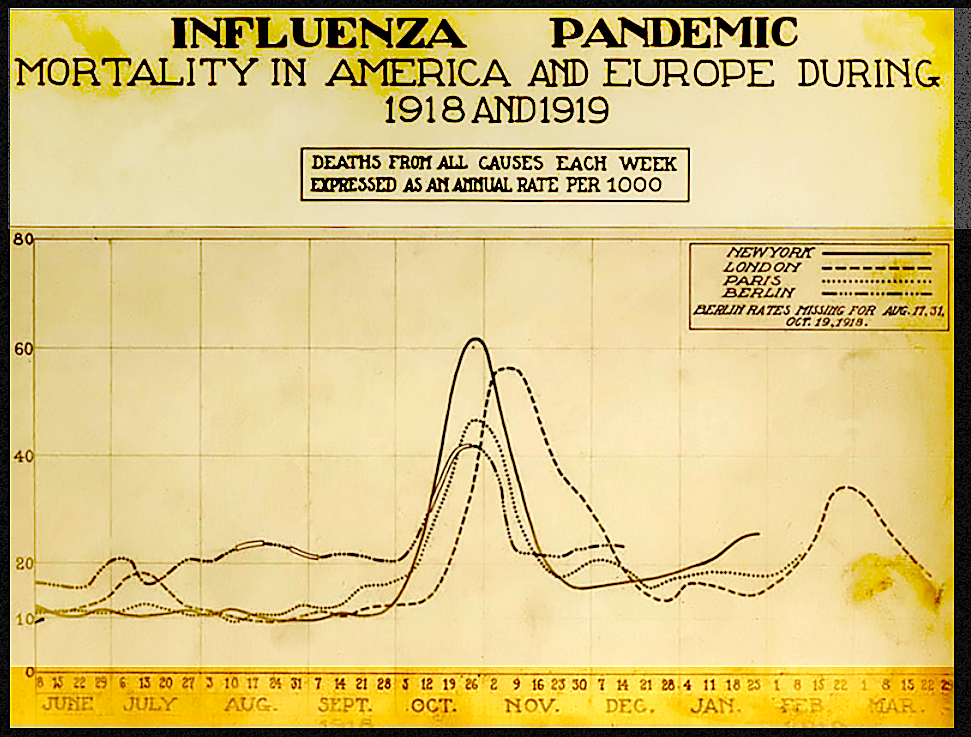 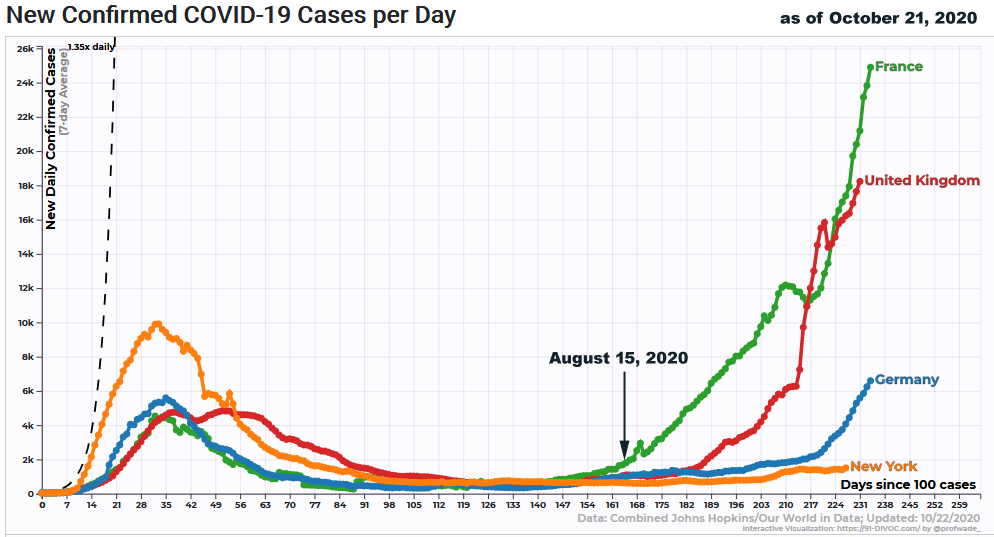 As a footnote on waves, here is a chart from the 2009 Swine Flu pandemic. 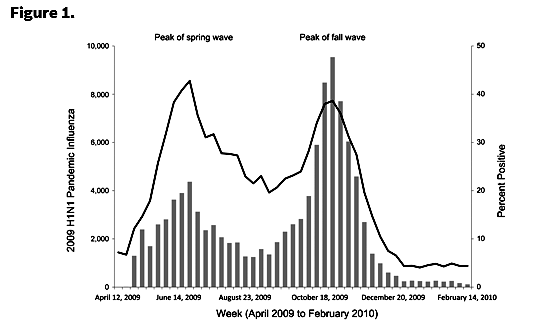 Epidemiology of 2009 Pandemic Influenza A (H1N1) in the United States… “The ‘2-wave’ pattern observed during the 2009 H1N1 pandemic is reminiscent of the temporal distribution of disease seen in the 1918–1919 H1N1 virus pandemic in the United States and other countries. The H2N2 pandemic in 1957–1958 also spread in the United States in 2 distinct waves and reportedly affected older persons disproportionately. In contrast, only a single peak was observed during the first year after the emergence of H3N2 virus in 1968. The variability in patterns of circulation of the 4 pandemics in the last 100 years is a reminder of the unpredictable nature of pandemics… The fall wave peaked in late October, and since that time, although circulation of pH1N1 virus has continued, influenza activity has decreased and remained below what is expected in the winter months.” – Oxford Academic, Jan. 2011

The skills for identifying patterns and trends with fusion/technical analysis for stock charts are really no different than the subset skill utilized in epidemiology: “the study (scientific, systematic, and data-driven) of the distribution (frequency, pattern).” The practice of epidemiology does not require a medical degree and is not limited to the medical industry.

The difference between an epidemic and a pandemic also needs to be clarified. An epidemic tends to affect a disproportionately large number of people within a population, community, or region. A pandemic is an epidemic that seeds the entire world. A characteristic of a Herald Wave is epidemic hotspots while a novel disease adapts to its new human host. COVID-19 traveled across the world and ignited hotspots in various regions that developed into separate and distinct waves, such as the delay in the U.S. between the east coast, south, and southwest when the more virulent Italian strain-lineage mutation via the Wuhan strain made its way across the continent. The typical second wave in a global pandemic builds after a disease has established itself across all regions and infections begin to rise exponentially everywhere at the same time within a compressed period in the next seasonal window conducive for the pathogen. That appears to be what is occurring now. Epidemics end but pandemics never end because they become endemic, in the same way that seasonal flu strains include the most recent flu pandemic (i.e. seasonal flu shots are formulated for the 2009 Swine Flu).

Opinions in favor of allowing COVID-19 to run its course (let ‘er rip) unchecked is a basic misunderstanding of what herd immunity actually is and how it can be achieved, which is multiplied in modern times with vaccines despite the inherent risk of injecting dangerous adjuvants. Herd immunity develops when a pathogen can no longer spread as easily because it encounters large roadblocks of people who are protected against infection. That dynamic does not create immunity to the virus itself, rather it reduces the risk for hosts that are more susceptible to infection. That is one reason why a pandemic never ends and may require a vaccine or seasonal jab to intervene, which encourages a level of protection before any significant mutation creates another out-of-control situation. Unfortunately, COVID-19 is a SARS family coronavirus (common cold) that adapts at a higher rate than the flu, antibody testing has shown only about four months of protection and reinfection confirmations are on the rise, and the potential for Antibody-dependence Enhancement (ADE) is high on the list for virulence and reinfection. ADE allows the virus to use antibodies to enter cells (think that one through here, here, and here).

It does not matter what politics or opinions are injected because more often than not people will tune into what they want to hear, and the virus couldn’t care less and does not read immunity certificates. Keep in mind that social distancing restrictions that were implemented during March blunted the rate of death substantially and gave us time to develop medicinal intervention and improve patient care protocols. If no restrictions were implemented, millions could have perished throughout the Herald Wave vs. only 200k+ in the U.S. alone.

The false promise of herd immunity for COVID-19… “‘Most of the herd-immunity calculations don’t have anything to say about behavior at all. They assume there’s no interventions, no behavioral changes or anything like that.’ This means that if a transient change in people’s behavior (such as physical distancing) drives the Rt (R-naught value) down, then ‘as soon as that behavior goes back to normal, the herd-immunity threshold will change.’” – Nature, Samuel Scarpino, Oct. 21

The Problem of False Equivalency in Public Health Debates… “Based on our current understanding of coronaviruses as a whole and SARS-CoV-2 in particular, there is no evidence that herd immunity exists for this disease. Pursuing such a policy is a tragedy in the making, one which could kill more than 2 million Americans in the coming months.” – William A. Haseltine Ph.D. on Psychology Today, Oct. 21

No matter how you slice and dice the metrics and potentialities, lockdown or no lockdown, mask or no mask, the ultimate determining factor is human behavior. If there were no restrictions, an exorbitant rate of death would have precipitated its own brand of fear and level of economic turmoil. More Americans would have died from COVID-19 in roughly a year than died in all the wars of the 20th century and then some. The difference between scenarios is likely incalculable and unknowable unless each one is played out and calculations are made when all is said and done. Pick your poison and being a chronic long-hauler is not pleasant.

As Their Numbers Grow, COVID-19 “Long Haulers” Stump Experts… “‘COVID has eaten my brain, because I can’t remember how to remember words, keep track of medication. My brain just feels like there’s a fog.’ 32-year-old Hanna Lockman considers herself to be a ‘long hauler,’ someone who still hasn’t fully recovered from COVID-19 weeks or even months after symptoms first arose.”  – JAMA, Sep. 23