LIBOR Has The EMT’s On Speed Dial

The London Interbank Offered Rate is one of the most important metrics for determining short-term interest rates around the world. Americans don’t know LIBOR the way other countries do since we pay attention to the federal funds rate offered by the Federal Reserve. LIBOR is calculated off of five currencies: USD, JPY, GBP, CHF, and EUR. Rates are offered off of several different maturities, including overnight, one week, one month, 2 months, 3 months, 6 months, and 12 months. This offered rate even has 35 different rates each day, and the most common is the three-month rate determined by the U.S. dollar. Current LIBOR is determined by the three-month rate linked to the U.S. dollar. Interbank rates are just that: a rate that contributing banks can obtain from the market. A group of 11 to 18 banks make up this rate amongst the five currencies.

Much like the federal funds rate, LIBOR defines the value of debt in the marketplace. As time moves forward, the value of debt becomes more and more negative, in my opinion. With the extreme amount of debt issuance going on, why would anyone buy a bond knowing that they would receive less money back than when they bought it? Student loans, credit cards, mortgages, government debt, and corporate bonds are some debt instruments that derive their value from LIBOR. What one can see coming is an increasing interest rate environment. LIBOR (current rate is 3 months) bottomed in May 2014 at .2261, and as of the end of March, the rate has moved to 2.1796. If you are a company surviving on limited cash flow and large debts, you can see how this would be an ominous warning. Bankruptcies this year will be significant, as well as mergers and acquisitions to limit debt cost. Fed heads speak of rising interest rates and lack of need for more interest rate increases in the same breath. Market rates will likely be cut to negative in the next crisis, and it will be interesting to see how high they are actually able to go. Higher rates and LIBOR make debt service payments higher for everyone. 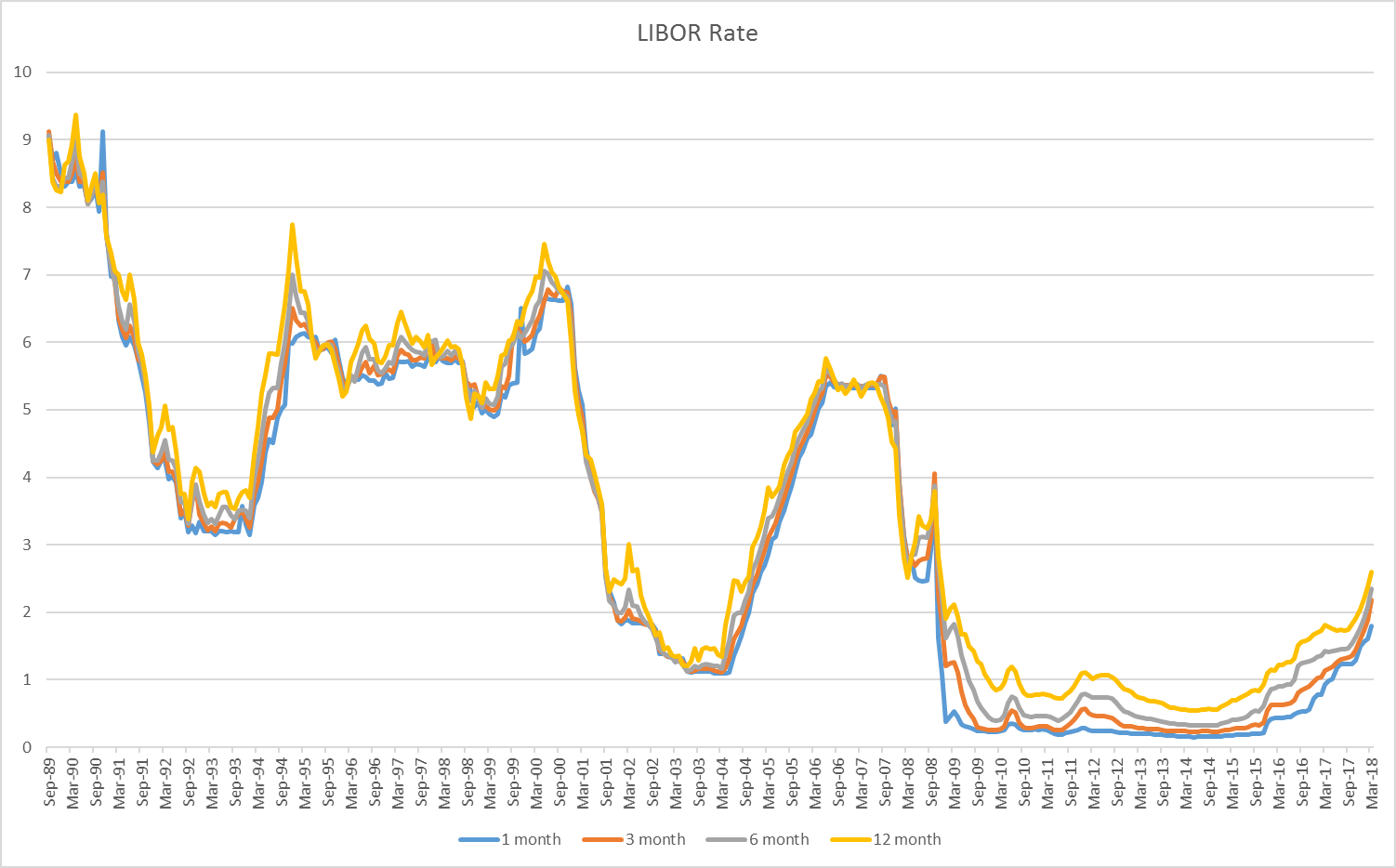 Firms are moving away from three-month LIBOR as borrowing costs increase. That is interesting because the three-month is already a short-dated loan instrument. American Airlines has moved towards one-month LIBOR as borrowing costs have risen. The switch makes sense when you look at one-month LIBOR vs. three-month LIBOR. Currently, one-month LIBOR is 1.89063 and three-month LIBOR is 2.3, the largest spread since the financial crisis. LIBOR will be phased out by 2021 as transactions underpinning LIBOR dwindle. The New York Fed introduced an alternative on April 2nd, known as the Secured Overnight Financing Rate. This rate is determined by the overnight Treasury repurchase agreement market. American Airlines stated in a regulatory filing that if the switch to the secured overnight financing rate or benchmarks causes rates to increase, they may not be able to meet their obligations. Language has been added to most loans and credit derivatives for LIBOR alternatives. As I write this, the 10-year yield has climbed to nearly 3%, and I can hear the ambulances in the distance. Is this foreshadowing? Is this the point where the EMTs pull the respirator out to keep Toys R Us alive, or maybe Facebook?