Litecoin Proves Its Worth as a Stable Cryptocurrency

No one ever said that the cryptocurrency markets weren’t volatile, and the vast majority of investors know what they’re getting into. Still, the volatility that began near the beginning of June and lasted until just a few days ago, got everyone’s attention.

From a session high just short of hitting $3,000, the king of cryptos bitcoin saw its market value hemorrhage by 38% over a month-long period. Fears of an upcoming soft fork, and the inability among bitcoin adherents to come to an agreement regarding the crypto’s scaling problem, sent all other cryptocurrency assets tanking.

The one notable exception was litecoin. Charles Lee initially engineered litecoin to be the silver to bitcoin’s gold. The irony, of course, is that silver tends to be a far more volatile commodity than gold. Nevertheless, it was litecoin that provided much-needed confidence for those long the cryptos.

When bitcoin began its descent from June 13 onwards, litecoin actually increased in market value. For example, between the 13th until the end of the month, bitcoin lost nearly 9%. During that same timeframe, litecoin gained 31.7%! In fact, while other blockchain assets were succumbing to almost-catastrophic volatility, litecoin went on to claim all-time records. 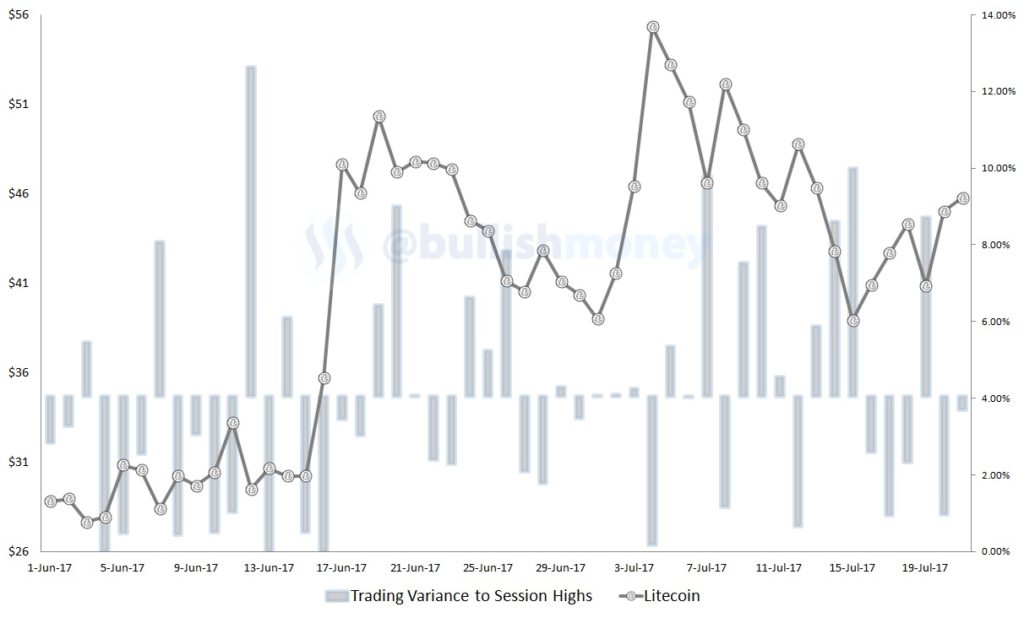 Interestingly, the “silver of the cryptos” has a trading variance between the “close” of the session and the highs of 4% since June 1. Compare that to bitcoin’s trading variance, which stands at 3.35%. Essentially, the variance tells us that more investors are bullish on bitcoin at any given time than they are on litecoin.

However, the biggest variance for litecoin is 12.6%, registered on June 12. This compares favorably to bitcoin, where max variance is nearly 16%. Also, the king of cryptos incurred four separate incidents of double-digit variance. In contrast, litecoin only incurred two.

This tells me that while average trading in the litecoin market is slightly less bullish than its cryptocurrency competitors, it’s much more stable. Generally speaking, you’re not seeing wild speculation as you would in other blockchain assets.

So while bitcoin grabs the headlines and garners the most attention, litecoin may actually be the most appropriate investment for those unfamiliar with the cryptos. It may not move like its brethren, but it holds its value remarkably well.

After the latest chop in the blockchain markets, some stability is just what the doctor ordered!