How Long Can This Litecoin Surge Last?

While bitcoin and ethereum have soared to stunning record highs and have naturally grabbed most of the headlines, another sometimes ignored cryptocurrency asset is making its name known. In just the past 24 hours, litecoin has jumped $12.47, or nearly 37%. Since the morning of June 15, litecoin has profited an astounding 81%. Could litecoin now be the “new ethereum?”

From the moment it first launched, cryptocurrency enthusiasts have largely regarded litecoin as a “poor man’s bitcoin.” When the king of the cryptocurrency markets was first enjoying its taste of mainstream success, litecoin was only trading for a few cents a pop. It seemed risky because it was. Although litecoin demonstrated potential in the past, it was also volatile, even compared to other cryptos.

To make matters worse, it was the considerably younger ethereum that became the number-two ranked cryptocurrency. With enough upside movements and engagement, a legitimate opportunity exists for ethereum to surpass bitcoin as the king of cryptos.

But with both currencies experiencing a correction from their sharp rallies, is it finally time to shine for litecoin?

In my CrushTheStreet.com article on May 21 entitled, “Ranking the Technical Strength of Major Cryptocurrencies!,” I put litecoin as my top pick. The primary reason was because the cryptocurrency was charting a bullish pennant formation. This is one of the psychological patterns created when bulls and bears jockey for position in a tightly contested market, and it usually resolves to the upside. 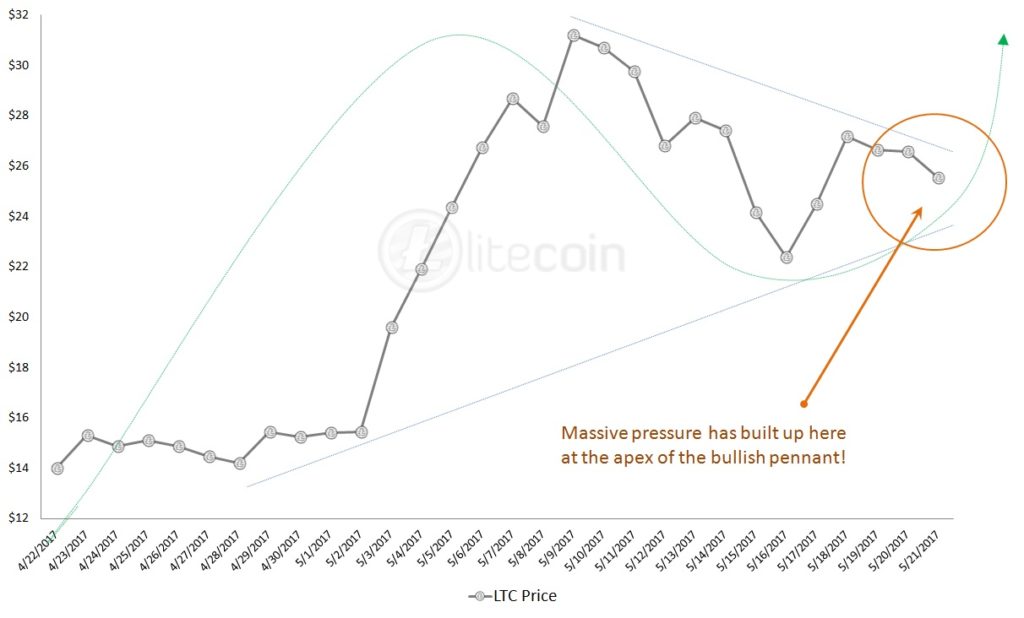 I wrote “Similar to its bigger brethren, Litecoin is forming a bullish pennant formation. The difference is that Litecoin is lagging the other two, meaning that it’s in the middle of development. Based on the massive explosion of Ethereum, we could easily see Litecoin hit $40 and beyond over the next few weeks.”

I was expecting litecoin to hit $40 a little sooner. Still, I think the pennant formation — and technical analysis in general — made a strong case for itself. At time of writing, litecoin is trading hands at $45 and we’re well inside a month’s time since my article was published. I’d say that’s a damn good forecast!

Where Will Litecoin Go?

After such an explosive rally, the biggest concern is a nearer-term correction. But against a longer-term perspective, I wouldn’t be surprised at all to see $100 litecoin over the next six to twelve months. 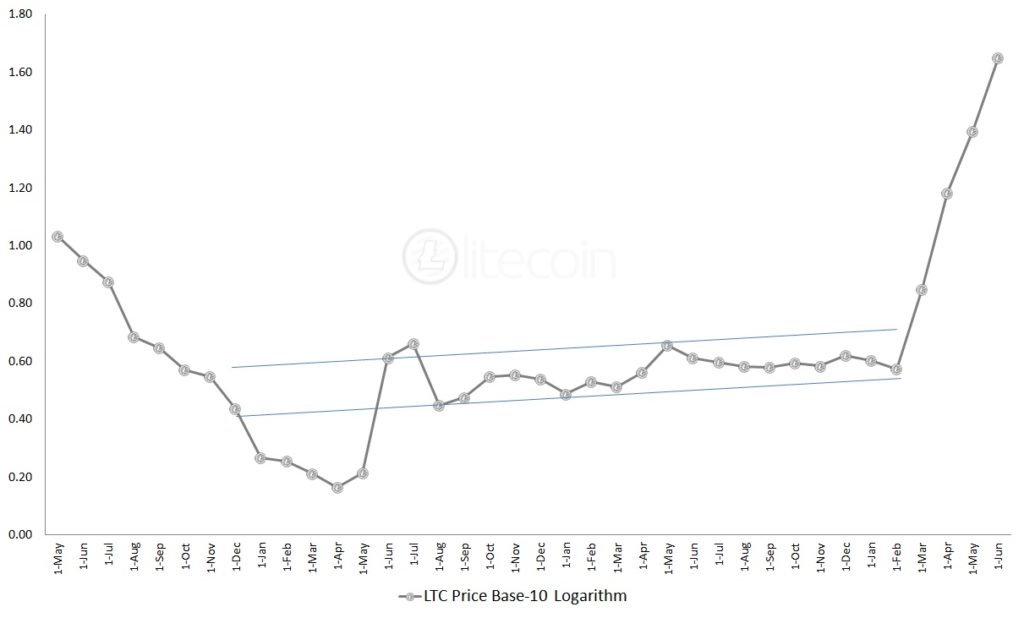 Here’s why — when you look at the cryptocurrency’s base-10 logarithmic chart, you can see that for over two years, litecoin has been in a consolidation pattern. This was so despite the fact that other cryptos generated significant boosts in valuation. For whatever reason, litecoin suffered a time-delay against the digital markets. That delay, it would seem, is now gone.

Such a massive consolidation for an industry on the rise logically indicates that we’re going to see amazing things in litecoin. I can make the case that litecoin is one of the most price-suppressed cryptos. That suppression has stored pent-up pressure. We’re witnessing the breakpoint where that impetus can no longer be contained.

Again, don’t be surprised to see litecoin join ethereum at triple-digit territory. At this juncture, it almost seems like destiny.