Support for Cannabis in the U.S. is Massively Shifting

We are in a different era. Massive changes are taking place in the cannabis space. Cannabis is no longer closer to heroin and cocaine on the spectrum of drugs, but much more in the category of alcohol and cigarettes. And in many cases, because of the health benefits and much lower rates of crime and consequences to human health, it’s a superior alternative to cigarettes and alcohol. 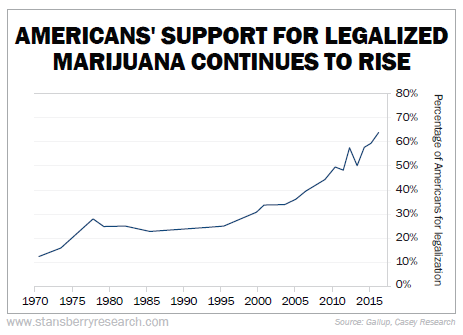 Cannabis is mainstream, and billions are waiting on the sidelines to pile into the sector.

Who would have thought that President Trump would be marijuana’s great savior? And by the way things are looking, this might very well be the case.

Considering how popular support for cannabis legalization is, Trump supporting it will greatly increase his chances of winning a reelection in 2020. Trump has signaled his willingness to support reform in the sector and make history by becoming the U.S. president who reverses a nearly century long policy of cannabis legalization and reap the political spoils.

Gallup polling released results in October saying that nationwide, 64% of respondents said marijuana should be legal across the board.

According to a recent CNBC statement, “Legal weed has reached a tipping point in the Trump era.”

In May of this year, California Senator Diane Feinstein said “she no longer opposes legal marijuana,” The Washington Post reported.

In April of this year, CNN reported that President Trump promised Colorado Senator Cory Gardner that he will not take steps to stop states that have already legalized marijuana.

It is specifically for these reasons that I am now looking into the best and most discounted opportunities that will thrive during the cannabis uptrend.

FinCanna Capital Corp., a royalty company for the U.S. licensed medical cannabis industry, reports that Cultivation Technologies Inc. (CTI), its first investment in California, announced today that it has executed an agreement with Phoenix Tears LLC to be the exclusive manufacturer and distributer of official Phoenix Tears THC-based products in California.

The Phoenix Tears-branded portfolio of THC-based products will initially include a full spectrum of oil dispensers, vaporizer cartridges, and vaporizer kits, as well as topicals.

These products will be sold and distributed primarily through CTI subsidiary Coachella Distributors, and potentially other strategic distributors to ensure state-wide coverage.

“This agreement represents a significant step forward for CTI as they continue to build out their manufacturing, distribution, and marketing businesses of cannabis and cannabis-related products,” said Andriyko Herchak, President and CEO of FinCanna Capital. “This agreement continues to validate our investment in CTI and gives our shareholders growing access to the burgeoning medical cannabis market in California.”

I don’t know about you, but I want to be completely prepared to profit from the uptrend in cannabis.

Momentum is creating momentum, and the synergy of legalization, along with infrastructure buildout, will only attract more and more money into the sector. As I see it, New Jersey, New York, and New Mexico are next in line to legalize cannabis, and this could prove to be absolutely game-changing and the tipping point that completely pours over.

Keep your eyes open for my number one Cannabis Royalty Play for 2018: FinCanna Capital Corp. (CSE: CALI & US: FNNZF).

This work is based on public filings, current events, interviews, corporate press releases and what we’ve learned as financial journalists. It may contain errors and you shouldn’t make any investment decision based solely on what you read here. It’s your money and your responsibility. The information herein is not intended to be personal legal or investment advice and may not be appropriate or applicable for all readers. If personal advice is needed, the services of a qualified legal, investment or tax professional should be sought.   Never base any decision off of our advertorials. Crush The Street stock profiles are intended to be stock ideas, NOT recommendations.

The ideas we present are high risk and you can lose your entire investment, we are not stock pickers, market timers, investment advisers, and you should not base any investment decision off our website, emails, videos, or anything we publish.  Please do your own research before investing. It is crucial that you at least look at current public filings and read the latest press releases. Information contained in this profile was extracted from current documents filed with the public, the company web site and other publicly available sources deemed reliable. Never base any investment decision from information contained in our website or emails or any or our publications. Our report is not intended to be, nor should it be construed as an offer to buy or sell, or a solicitation of an offer to buy or sell securities, or as a recommendation to purchase anything. This publication may provide the addresses or contain hyperlinks to websites; we disclaim any responsibility for the content of any such other websites. We are long FinCanna Capital Corp. and own shares of the company that we will not sell during our active marketing coverage. The company has paid two hundred and fifty thousand Canadian dollars for one year of digital advertising, which includes emails, videos, and interviews. Please use our site as a place to get ideas. Enjoy our videos and news analysis, but never make an investment decision off of anything we say.