On the second-to-last trading session for 2018, the markets took a rather ambiguous route. Following two days of strong bullish enthusiasm, the Dow Jones Industrial Average closed down 0.33%. The S&P 500 slipped 0.12%, while the Nasdaq mustered a barely-perceptible profit.

But in the bigger picture, the unenthusiastic response is essentially a disaster. Since October’s opening price point, the Dow has hemorrhaged a worrying 13%. That percentage loss includes the more than 6% gain between December 24th and December 27th. If the markets are going to move higher, they’re doing a poor job selling that message.

I don’t mean to pound on the broader investment sector. However, technical indicators suggest that the worst is not over. From peak to trough, December has experienced a drop of nearly 15.5% in value. Again, we’ve only seen a 6% lift to counteract that devastation. Clearly, the bears are winning the narrative. 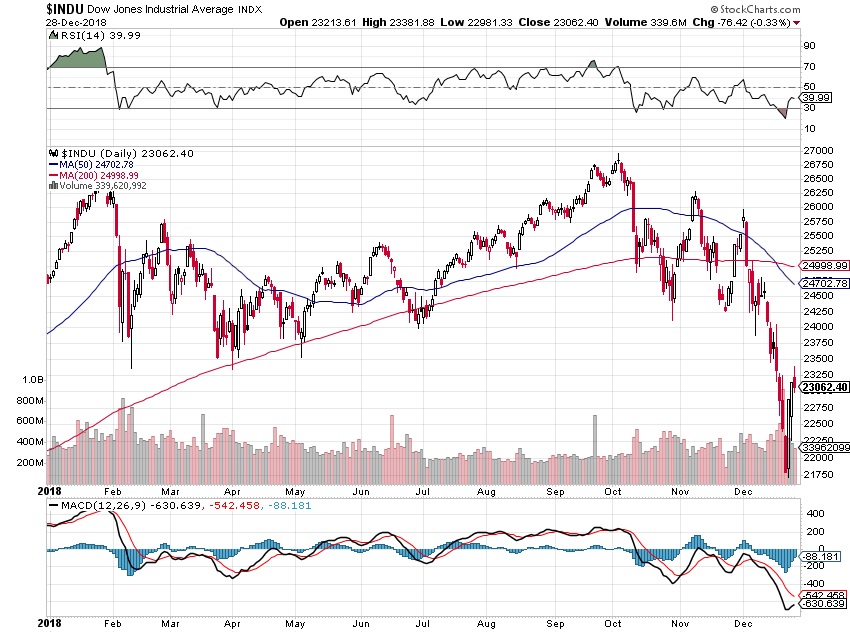 Because the countering bullish response was so weak, this dynamic will only encourage short-traders. They see blood in the water. More critically, the fundamentals support their point-of-view.

Everyday, we’re treated to some new controversy in the White House. Some reports may indeed be “fake news,” but all of them? And if that wasn’t enough, we have no shortage of geopolitical tensions to upset the markets.

If 2018 is the year of broken promises, 2019 could bring the resultant tears and heartbreak. Recall that in prior years, contrarian analysts warned that the markets have moved well ahead of themselves.

The popular thinking is that the most recent selloff represented the necessary correction. I’m not so sure. Unless something crazy happens on New Year’s Eve, we’re probably looking at around a 7% loss for the year. In the grand scheme, that’s nothing.

Typically, markets experience a corrective surge following a speculation bubble before reverting to the mean. If that adage holds true, next year will bring chaos and carnage. I’m buckling up for volatility while hoping for the best.

Under these circumstances, most people tend to run away from the investment sector. Doomsday propagators don’t help mitigate this trend. But rather than fleeing, I encourage readers to look at the broader opportunity.

I’m not suggesting that you ignore the downside risks. What I’m saying is that every decade or two, investors have a chance to advantage perhaps life-changing discounts.

From my own experience, I know that some of my best returns have come from crisis periods. Ultimately, do what you need to do. But also keep an eye on the tape: if some sound investments looked attractive a few months back, they should look even better right now.