Cryptocurrencies still don’t get much love despite a recent, record-breaking performance. By now, the entire world has absorbed the reality of Bitcoin prices hitting an astounding $10,000. But prior to the run-up, and especially now that it has breached this milestone, stories of the “Bitcoin bubble” permeate the mainstream media.

I’m not here to pound on the media as I can understand why people would think this way. Several years ago, Bitcoin was essentially a digital penny stock. Today, you can buy a decent, used car with one unit. To seemingly most individuals, this is indisputable evidence that the Bitcoin bubble is real.

As well-intentioned as these arguments may be, Bitcoin prices hitting a ceiling (and therefore facing imminent collapse) is nothing but fake news. Better yet, I will prove to you that the Bitcoin bubble is nothing more than a precontrived fantasy.

A Problem of Scale

Whenever the media runs a Bitcoin bubble story, they always use nominal price charts to distort the truth. When you’re dealing with massive price movements, the law of large numbers dictates that you use a logarithmic scale to level out nominal distortions.

Using the logarithmic scale — the only long-term option for an asset that trades in the pennies to five-digits — we can see that Bitcoin prices ebb-and-flow at a much more reasonable trajectory. Moreover, we can see that the rally throughout much of this year had significant price increases, but over a fairly long timeframe. 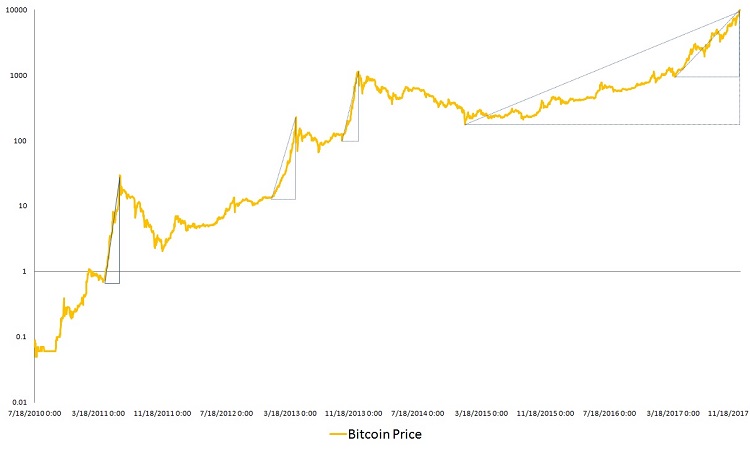 In contrast, Bitcoin rallies prior to 2014 featured both rapid price increases and short timeframes. Mathematically speaking, the velocity of price increases was far greater during Bitcoin’s early years.

The Bitcoin bubble argument is nothing more than clever fake news. Again, valuations did indeed rise to record-breaking levels, but not in record-breaking time. Typically, you need both elements for an investment asset to be considered a bubble.

Nevertheless, I’m not making a recommendation to either buy or sell. Rather, I’m simply pointing out information that rising Bitcoin prices alone do not make a bubble. Other factors, primarily how quickly prices rise, must also be taken into consideration.