Have you heard about the latest Fountain of Youth? If you happen to be young enough, exercise a healthy lifestyle, and are disease-free, you might be able to tap into a fountain of fortune. For Generation Y/Z and millennials that behold millennialism, the potential exists for a unique way to pay off annoying student loan debt or add to your retirement nest egg by contributing to the latest supernatural anti-aging fad. There is no need to bite or bond with a vampire to attain your personal debt jubilee or immortal state. The only requirement for sucking some wealth or extending your mortality is a stroll over to the nearest Ambrosia Health Plasma Therapy transfusion center to donate young blood or infuse some blood into your veins.

If you prefer taking a pill to achieve longevity because a consummation with someone else’s blood gives you the heebie-jeebies, have no fear because the pill popping option is in the works to satiate your investment or immortality dream.

Nobel Laureates: Anti-Aging Fountain of Youth in a Pill… “NMN… If there were a pill containing an elixir that could mitigate and reverse metabolic processes within your aging body, it would be the supreme discovery and investment opportunity of the 21st century. The initial research and clinical trials are convincing, while an avenue for direct investment in the financial markets remains elusive, but not far off.” – TraderStef, Aug. 2018

In Greek mythology, ambrosia was the food of Olympian gods that brought longevity and immortality. When consumed, the blood in your body transforms into another fluid known as ichor. Generally, only deities can consume the food of the gods. If a mortal partakes in such activity, they are punished for hubris.

The history of young blood as a rejuvenating elixir has had its share of entrepreneurs. During the sixteenth century, German doctor and alchemist Andreas Libavius proposed to connect a young and old man together by the arteries. In a story recounted by Sally Rudmann, Libavius was heard saying “the hot and spirituous blood of the young man will pour into the old one as if it were from a fountain of youth, and all of his weakness will be dispelled.” Nobody knows how the experiment turned out because there is no record of it ever taking place. The Royal Society, founded in London in 1660, witnessed some of the earliest experiments in blood transfusion. At the top of the founders’ wish list of scientific projects was “the prolongation of life, achieved by replacing old blood with new.” The procedure was eventually banned in France, and then England. The pope endorsed the bans in 1679 and transfusions ceased for a century.

As advances in modern medicine allowed the return of blood transfusion, emphasis was on healing the sick and diseased, not the aged. Research in the early 20th century discovered the complexity of human blood types and it became clear that a transfusion for any purpose was dangerous and a game of Russian roulette. During the 1920s, philosopher and physician Alexander Bogdanov conducted hematology experiments on himself and claimed that infusions of young blood gave him more energy, stopped his balding, and improved his eyesight. Bogdanov died after a few years into his blood experiments.

The Genius Who Killed Himself Trying to Become Immortal – i09-Gizmodo, Mar. 2014

The purification of blood plasma is now a common medical procedure used to combat a variety of diseases, but a supernatural version of hubris made possible by Ambrosia Health appears to be a legitimate operation that completed clinical trials in Jan. 2018 but has yet to make the results public. According to a Huffington Post story, the results will eventually become available in a peer-reviewed journal.

Young Donor Plasma Transfusion and Age-Related Biomarkers… “Each patient will receive an infusion of plasma derived from a young donor (16-25 years of age). A panel of age-associated biomarkers will be measured before and after treatment. We have drawn biomarkers from clinical measures of aging and physiology, biomarkers of disease advancement, as well as biomarkers of aging from animal and human studies. These will represent a spectrum of physiologic pathways with evidence-based connections to aging. They include the physiologic processes of inflammation, neurogenesis, stem cell proliferation, blood clotting, immune function, and amyloid plaques. Organ function which will be specifically measured includes the liver, bone marrow, kidneys, pancreas, muscles, cardiovasculature, cerebrovasculature, and the thyroid. Specific disease states connected to these biomarkers include anemia, neutropenia, thrombocytopenia, obesity, diabetes, high cholesterol, elevated risk of cancer, atherosclerosis, dementia, and cataracts.” – ClinicalTrials.gov 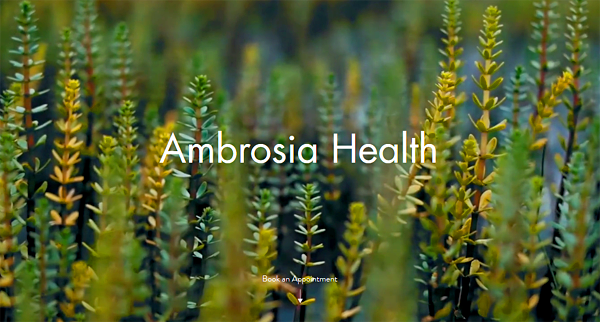 It only takes about two hours to have two liters of plasma from a donor aged 16 to 25 infused into your body. According to Ambrosia Health founder Jesse Karmazin, a graduate of Stanford Medical School, results are nothing short of miraculous. He dubs it “plastic surgery from the inside out… it doesn’t grant immortality, but it comes pretty close.”

Ambrosia Health has garnered a lot of attention in the mainstream media over the last two years. In addition to its existing clinics across the country, a new office will open in New York where the company will access a much larger client base and publicity. The age limit to receive a transfusion is 30 years and older, which comes with a hefty price tag of $8,000 for a 1-liter infusion and $12,000 for a 2-liter fill-up. Note that there was no approval required by the Food and Drug Administration, as it is technically a simple transfusion and well-established medical procedure that has been performed for many decades. The only difference is the goal. Instead of treating a serious health condition, Ambrosia Health is promoting an anti-aging treatment.

As with the pill option, there is no direct avenue of investment available in the financial markets at this time, but rest assured there will be at some point down the road.

Black Sabbath – Lord Of This World (Master of Reality)