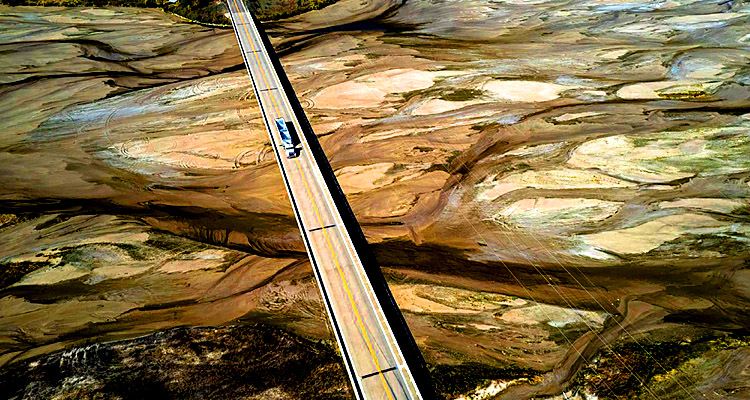 The worst drought in at least a decade has caused the Mississippi River and tributaries that feed it from the Rocky Mountains to the Appalachian Mountains to dry up this year as the Mississippi registered historic low water levels from Illinois to Louisiana last week. Last Tuesday, the river fell to a record low stage of -10.79 feet at the gauge in Memphis, Tennessee (USGS gauge map). The previous all-time record of -10.70 feet was set in July 1988. “If the river freezes before levels go up, this will cause a negative loop in the supply chain for next year’s crops and harvest.”

Water levels along some stretches of the Mississippi River are so low that centuries-old shipwrecks are being exposed. Gauges across much of the South and Midwest continue to report historically low levels and are expected to fall further after NOAA’s forecast for fall, and winter is not indicative of a respite from drought. Topsoil continues to dry out across the Ohio Valley and the corn belt, and deeper soil moisture remains very low across most of the Mississippi Valley. 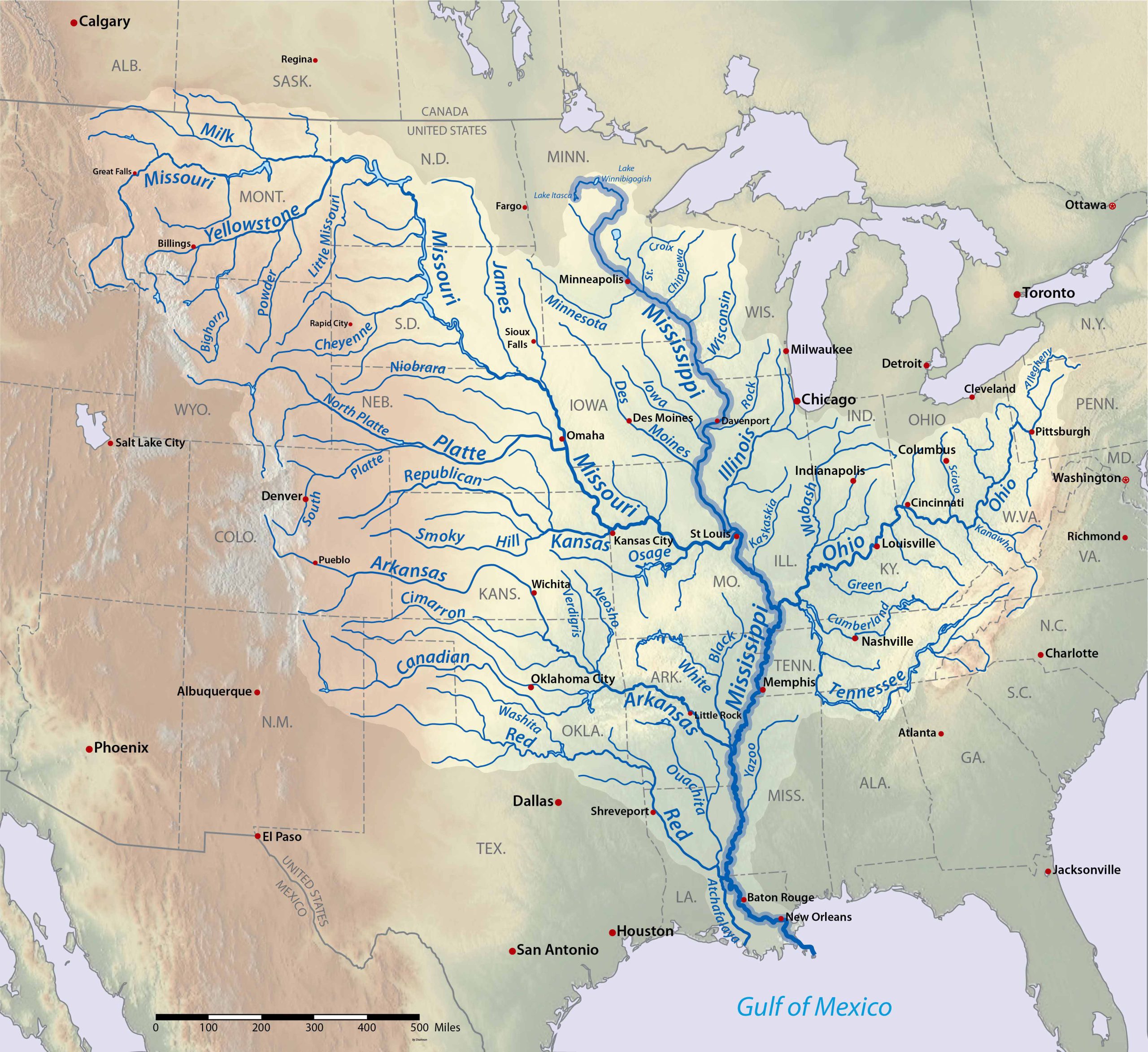 Map of the Midwest Basin, Tributaries, and Mississippi River

“Because of below-normal rainfall in the Midwest, the Mississippi River at Cairo, Ill, is approaching its lowest river level since 1901. To help stabilize commercial navigation conditions on the lower Ohio and Mississippi Rivers, we are scheduling special water releases from Kentucky Dam on the Tennessee River and Barkley Dam on the Cumberland River to help low river level impacts.” – Tennessee Valley Authority, Oct. 18, 2022

U.S. Winter Outlook: Warmer, drier South with ongoing La Nina… “This year La Niña returns for the third consecutive winter, driving warmer-than-average temperatures for the Southwest and along the Gulf Coast and eastern seaboard… Starting in December 2022 through February 2023, NOAA predicts drier-than-average conditions across the South… ‘Drought conditions are now present across approximately 59% of the country, but parts of the Western U.S. and southern Great Plains will continue to be the hardest hit this winter… With the La Niña climate pattern still in place, drought conditions may also expand to the Gulf Coast.’” – NOAA, Oct. 20 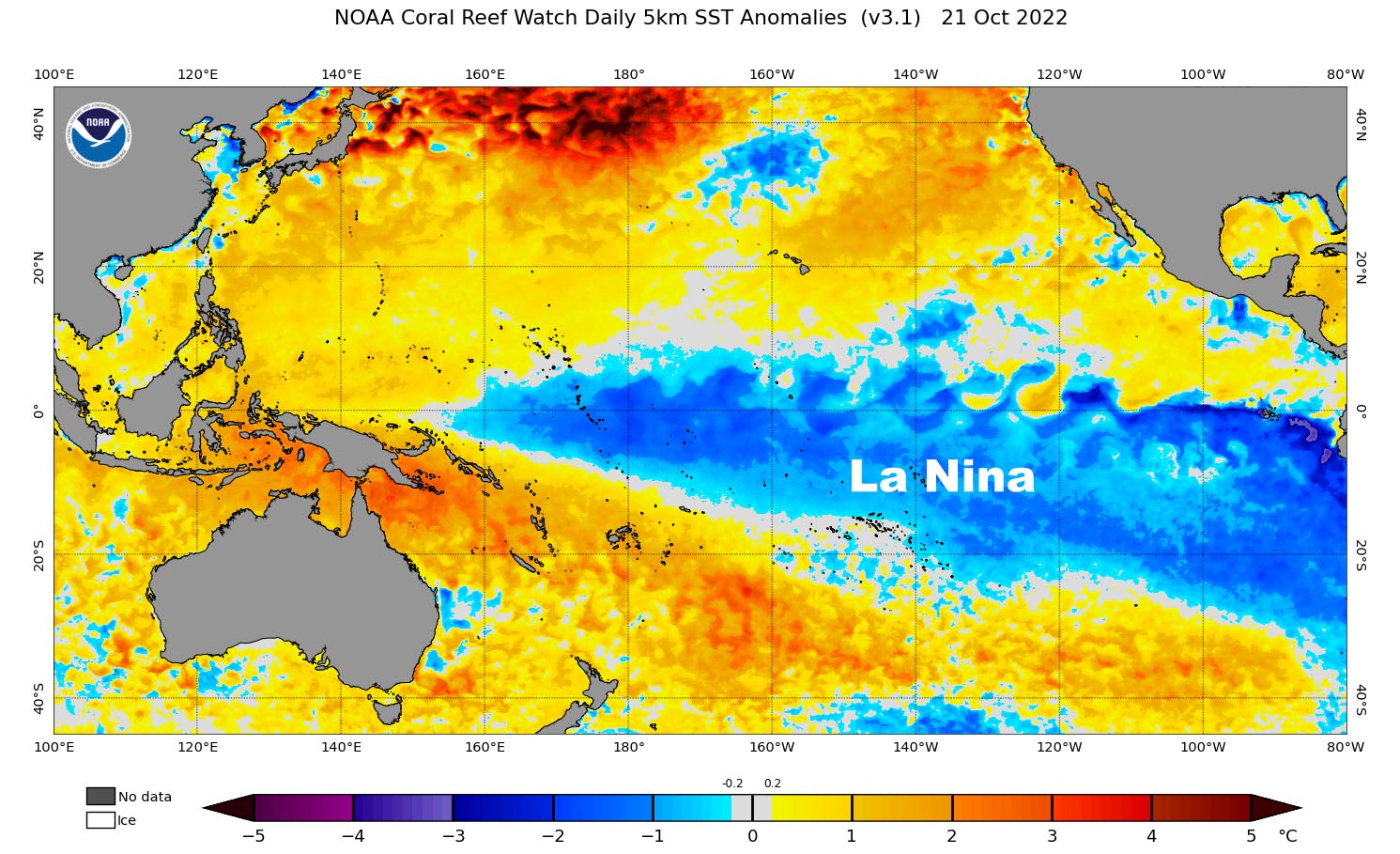 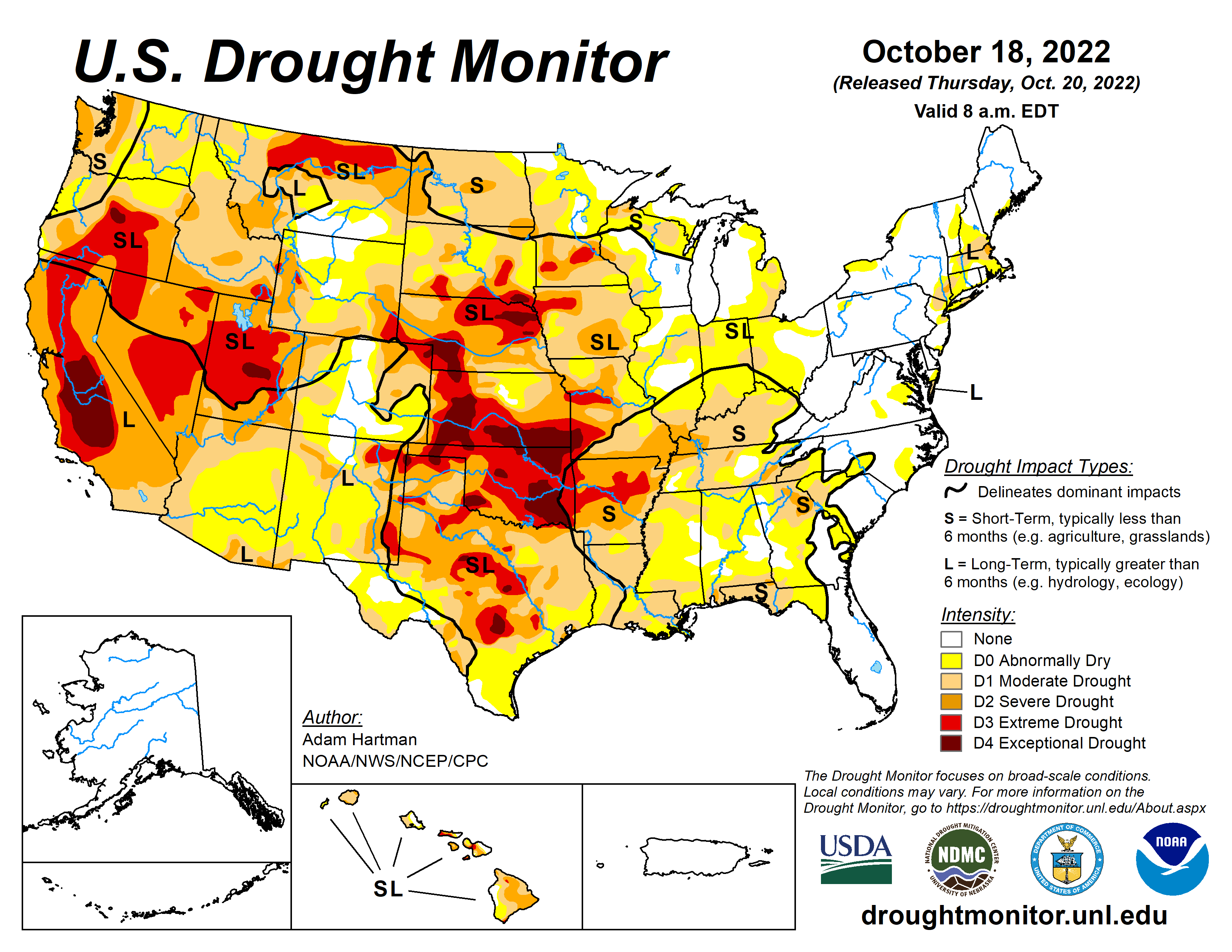 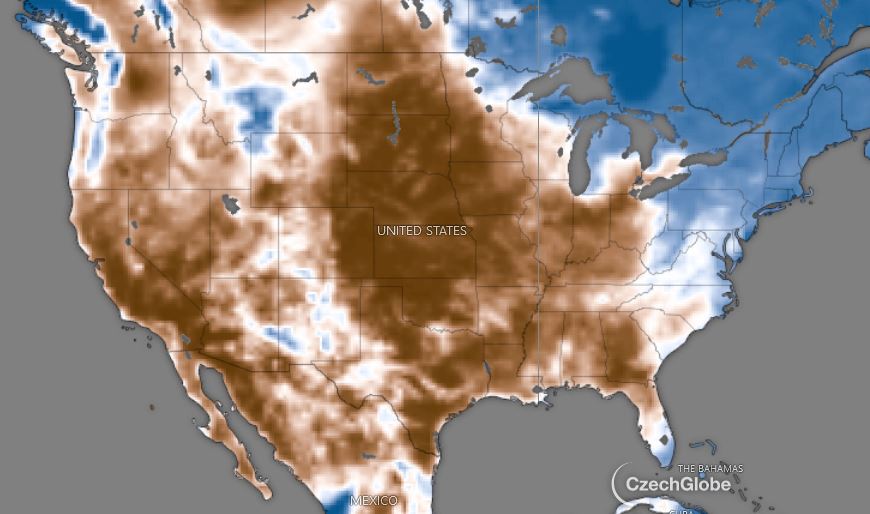 The supply chain crisis across the U.S. launched a cost-push inflation effect that’s likely to worsen if restrictions on the passage of cargo up and down the Mississippi River are not alleviated before the winter freeze. Low water levels are creating barge backups, and some have already run aground, which drives up shipping costs. Restrictive water levels arrived at a critical time of the year for the transport of crops from the nation’s breadbasket. Almost all corn and soybean products and half of all wheat that moves by barge in the U.S. travels along the Mississippi River.

‘It’s disastrous’: Barge captain explains transportation woes on shallow Mississippi… “Eight days. Maybe 10. That’s how long it should take to move barges from Morris, Ill., down the Illinois River to the Mississippi River and on to New Orleans, according to barge captain Eric Badeaux with more than 40 years of experience… ‘We had been on the boat two weeks and had not even made it to Memphis yet.’ At one point, Badeaux and his crew only traveled 60 miles in four days. They typically average 200 miles per day when heading south. ‘In one day, we burned 2,367 gallons of diesel fuel, just sitting here fighting the current. That comes out to about $10,000 in fuel for one day, and we barely moved. Multiply the fuel costs for all of the boats just sitting here, plus all the other costs involved in boat maintenance and you can see why transportation costs are through the roof. It’s disastrous.’” – Delta Farm Press, Oct. 19

Some portions of the river are at levels not seen in more than three decades and are disrupting “a vital supply lane for a variety of goods including agriculture, oil, and building materials.” The cost to send grains via barge down the Mississippi River has dropped but remains much higher than it was at this time last year. It is 130% higher YoY and 260% higher than the three-year average. “Amid uncertainty about when barge traffic will normalize, some grain shippers have delayed deliveries until later in the year, which has softened demand for barges,” according to the latest USDA Grain Transportation Report. The Army Corps of Engineers began targeted dredging operations to help keep traffic flowing, but it’s still at a much slower and more costly pace. Hundreds of barges and ships have been forced to queue up while waiting for an all-clear to pass through

Mississippi River Drought Imperils Trade: Here’s Why… “One shipping company said low water levels are causing severe impacts to navigation not seen since 1988. It’s a key concern for transporting goods from a river basin that produces 92% of the nation’s agricultural exports, especially during harvest season… A barge carries 1,750 tons of dry cargo — the equivalent of 70 trucks. A tow hauling 15 barges can carry more than 900,000 bushels of grains and over 20 million gallons of liquid… The biggest market impacts are on grains, fertilizer, oil, and coal.” – gCaptain, Oct. 6

Drought to tighten its grip on U.S. this winter… “Texas is entering the cool season with about 68% of its reservoir storage capacity, which compares to an average of 80% at this time of year, Texas state climatologist John Nielsen-Gammon told Axios via email. ‘If we don’t get replenishment this winter, and especially this spring after La Niña wanes away, water supply issues could become much worse than they were last summer in Texas.’” Axios, Oct. 21

As a reminder, the unprecedented slaughter of cattle this past summer due to extreme drought in Texas created a glut of beef that provided a respite in price at your local butcher this fall. As covered in “Severe Drought Forcing the Extraordinary Slaughter of Cattle” published on Jul. 25, expect the prices of beef products to rise this winter. If the drought persists as forecast, prices at the local grocery store could rise higher than initially expected for next spring and summer.

Adding to supply chain worries in the U.S., the threat of a union railroad strike is not over despite efforts by the Biden administration to negotiate a deal since mid-September. Logistic managers are getting plans ready for a strike in November that would cause unprecedented havoc and cost the U.S. economy roughly $2 billion per day. Shipments that require multiple modes of transportation that include freight rail, ocean, and trucking can have a week’s delay from when cargo is picked up and makes it onto rail lines, so a lot of contingency planning is required to redirect freight.

The National Carriers’ Conference Committee (NCCC) notified the Brotherhood of Maintenance of Way Employees Division of the International Brotherhood of Teamsters (BMWED) that the union’s latest offer was rejected. Congress has the ability to impose a resolution provided by the Presidential Emergency Board (PEB), but railroad employees could still strike as early as November 19. The BMWED spokesperson is quoted as saying “the railroads consistently underestimate the frustration and anger of the workers. Workers can’t take it anymore.”

Railroads reject sick time demands, raising chance of strike… “The major freight railroads appear unwilling to give track maintenance workers much more than they received in the initial contract they rejected last week, increasing the chances of a strike. The railroads took the unusual step of issuing a statement late Wednesday rejecting the Brotherhood of Maintenance of Way Employes Division union’s latest request to add seven days of paid sick time on top of the 24% raises and $5,000 in bonuses they received in the first five-year deal… Six of the 12 railroad unions that represent 115,000 workers nationwide have approved their tentative agreements with the railroads so far, but all of them have to ratify their contracts to avoid a strike. The unions have agreed to put any strike on hold until at least mid-November… A railroad strike could devastate the economy… Concerns about quality of life and the ability for workers — particularly the engineers and conductors who drive the trains — to take time off without being penalized have weighed heavily on the negotiations… The railroads seem to be banking on the assumption that Congress would likely impose terms similar to what the PEB recommended to refuse offering more than that report called for. But the railroads are free to negotiate more than the board recommended if they want to.” – The Buffalo News, Oct. 20

As background, consider reviewing “Fertilizer Inflation and a Supply Chain Crisis Begets Food Insecurity” Parts 1 and 2 published in Jan. and Feb. 2022. There’s also the “Supply Chain Crisis Will Not End Anytime Soon” Parts 1, 2, 3, 4, and 5, published from Aug. 2021 to Jul. 2022. Here’s an excerpt from Part 5:

“The conflagration of bad news in geopolitics, the United States economy, and international supply chains are not subsiding… The U.S. has been through a lot since shipping ports were jammed after the pandemic’s initial global shutdown. We’re now at the doorstep of a potential hard-landing recession with a clueless clan in the White House, ongoing deficiencies continue in microchip and semiconductor supplies for everything electronic, high inflation across the board is not abating, fertilizer shortages threaten famine around the world, a NATO proxy war in Ukraine and sanctions imposed upon Russia are backfiring on Western economies and energy supply, the U.S. bird flu outbreak in poultry has tripled the price of eggs and added supply constraints, diesel fuel shortages will soon include diesel engine oil and DEF scarcity, reductions in railway capacity and cargo is growing while facing a possible railroad union strike, new shipping delays due to China’s spring lockdown of its major cities and shipping ports is set to unleash a backlog at U.S. ports, and we have farmers across the world protesting and/or shutting down supply chains and transportation due to ridiculous edicts imposed by government greenies.” – TraderStef, Jul. 22

There are too many flashpoints in today’s world to be sanguine about investing wisely and storing survival necessities. Don’t let your guard down, and keep your pantry stocked. 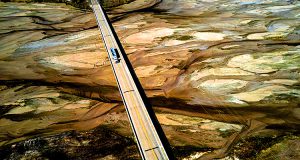