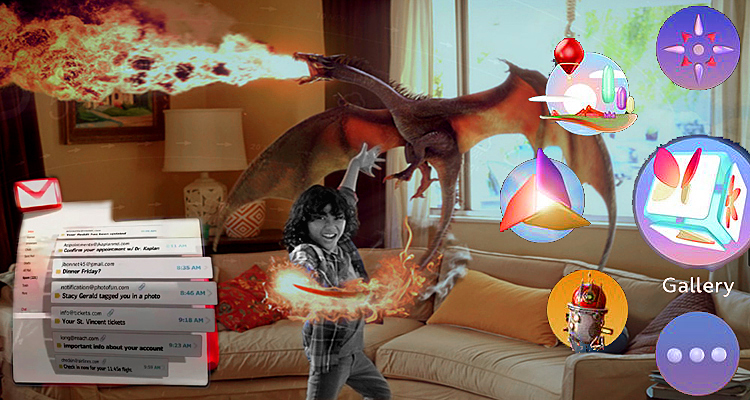 Technological advances are coming at a breakneck pace in recent years. Sci-fi flick journeys into the future with amazing special effects have become a ho-hum expectation, but the entertainment complex’s fantasy machine is steadily leaping off the big silver screen and into our homes and workplaces. Artificial intelligence is making the headlines of late, while advances in quantum computing, super-computing, computer vision, artificial reality, virtual reality, and augmented reality have temporarily taken backseats to the show. Another show with an unfinished script over the last few years is mixed reality, and it is about to make its mark in short order. The potential it has to enhance, utilize, and merge with established and emergent technologies is mind-blowing. It deserves a tab on your investment watch list as corporate conglomerates compete to gobble up start-ups, launch their own independent brands, and a start-up that remains independent could possibly become the new Amazon of mixed reality in the ever-growing wireless ether. Here is a breakdown to clarify the new “realities.”

Artificial Reality: this was the term Myron W. Krueger used to describe his interactive, immersive environments based on video recognition techniques that put a user in full, unencumbered contact with the digital world. He started work on this idea during the late 1960s and is considered a key figure in the early innovation of virtual reality.

When most people hear the word “mobile,” they immediately think of the smartphone, but mobile technology is becoming more than just a device in one’s hand. The mobile space is morphing into a variety of platform possibilities, such as wearables that can incorporate the Internet of Things and other emerging technologies that will transform on-the-go interaction.

The Internet of Things Is Far Bigger Than Anyone Realizes… “A machine is an instrument, it’s a tool, and it’s something that’s physically doing something. When we talk about making machines ‘smart,’ we are not referring strictly to machine-to-machine. We are talking about sensors. A sensor is not a machine. It does not do anything in the same sense that a machine does. It measures, it evaluates; in short, it gathers data. The Internet of Things really comes together with the connection of sensors and machines. That is to say, the real value that the Internet of Things creates is at the intersection of gathering data and leveraging it. All the information gathered by all the sensors in the world is not worth very much if there isn’t an infrastructure in place to analyze it in real time. Cloud-based applications are the key to using leveraged data. The Internet of Things does not function without cloud-based applications to interpret and transmit the data coming from all these sensors. The cloud is what enables the apps to go to work for you anytime, anywhere.” – Wired, Nov. 2014

A growing network of connectivity will enable brands and technologies to connect consumers in an array of ways across multiple platforms. The common denominator in the connectivity and innovation will ultimately be the consumers’ wants and needs, and the opportunities that artificial reality may offer are infinite. All the major players (Facebook, Google, Apple, Amazon, Microsoft, Sony, and Samsung) have whole groups of folks dedicated to artificial reality, and they’re hiring engineers every day. Then there are 200+ companies (such as Meta Vision, The Void, Atheer, and 8i) working feverishly on hardware, content, and apps for new artificial reality platforms.

One of the best artificial reality systems you can currently purchase is the Oculus VR, which Facebook purchased for $2 billion. The Oculus VR was built in collaboration with Samsung and lets you slide a Samsung smartphone into a headset to play games and watch videos. Another system currently on the market is the Microsoft HoloLens, which is “the first self-contained, holographic computer, enabling you to engage with your digital content and interact with holograms in the world around you.” There are several variations, including Vive, Samsung Gear, Google Daydream View, MindMaze, and Wevr.

Many start-ups are flooding the marketplace, but one appears to stand out: Magic Leap. While the majority of artificial reality platforms transport you into a virtual world for fun and games, Magic Leap is bringing the fun and games and day-to-day life/work experience to the world you already live in.

What is unique about Magic Leap is that they came up with an alternative to stereoscopic 3-D that does not disrupt the way you normally see things. It does this by creating a min-projector in the headset that shines light directly into your eyes, blending with the light you already receive from the real world. There are crisp images of monsters, robots, office tools, Windows software, and someday I see video chats with friends from the other side of the planet that appear to be sitting in your living room, and you in theirs, instead of a 2-D smartphone and a pair of earbuds. I also envision a walk around a metropolitan area with a virtual tour guide, where buildings are overlaid with images of how a neighborhood once looked. I also see movies where the actors are right in front of you and you can follow them around the set as the storyline unfolds on the silver screen. The point is that the options are infinite and amazing apps will be dreamed up by savvy developers along the way.

Google is one source of seed money that has seen the potential and forked out a half billion into the Magic Leap ether. From what I have read thus far, $2.3 billion has flowed into this particular secretive start-up. The release of its first system will happen before the end of 2018. AT&T has jumped onto this bandwagon and revealed that it will be its exclusive U.S. carrier. I am hoping they launch an IPO, and other competitors arise out of the ether and expand stock market investment opportunities for public consumption.