Pull up a five-year weekly chart of either the Dow Jones or the S&P 500, and you’ll soon see a common denominator. While the major indices are surging forward to all-time records, their accompanying volume levels are declining. In technical analysis theory, we would state that volume is not confirming the price action.

Naturally, a question arises — just where is the money going?

One of the worst bull markets to invest in is a rally that demonstrates no fundamental logic or reasoning. That is, if the markets are moving higher, we would expect a reasonable increase in volume, sentiment, and integration. Without these elements, serious questions will erupt as to whether or not the rally is sustainable. 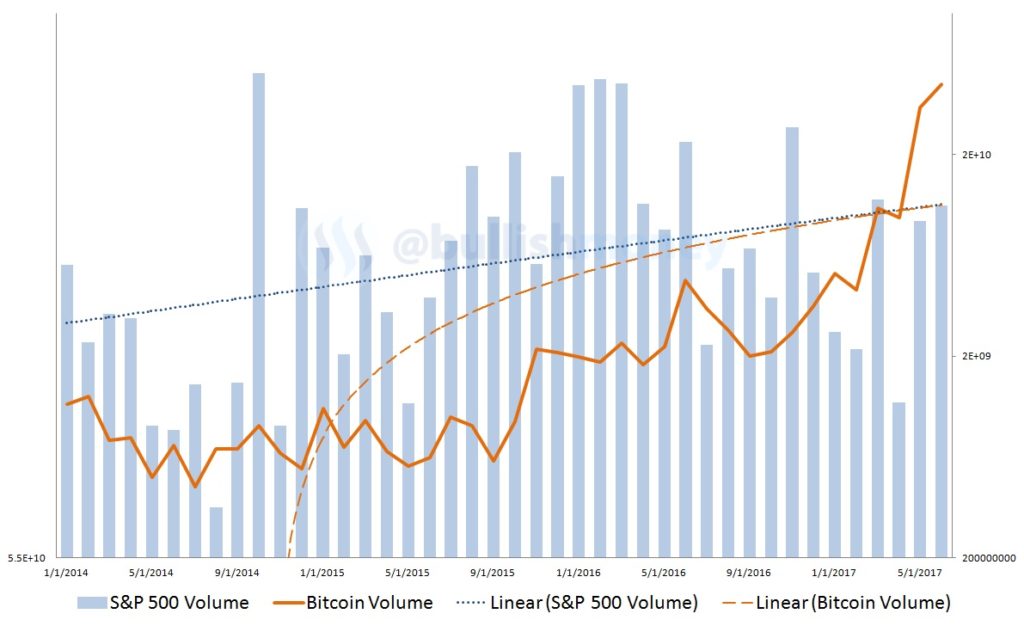 On the flipside, bitcoin and other blockchain assets are the quintessential example of what you want to see in bull markets. Since the election of now-President Donald Trump to the month of June, bitcoin jumped over 270%, accompanied by a massive volume increase of almost 1,600%!

Contrast this with the S&P 500 index. The “price” of one share of the markets increased roughly 10%. However, the volume decreased by a margin greater than 8%. That’s completely illogical, and refutes the government myth that America is firmly on the road to economic recovery.

Quite obviously, the money is leaving the mainstream, traditional markets in favor of the blockchain!

Not only that, this trend shows no sign of abating. The media has questioned the stability of bitcoin and other cryptocurrency assets on the basis of their recent volatility. But almost in a direct rebuttal, bitcoin is now within 12% of its all-time high. Furthermore, the amount of volume and integration is unprecedented.

Even those that have never once considered the cryptocurrency markets are getting involved. Nowhere else but the blockchain can an investor consistently grow his or her money. With traditional benchmark funds, you’re lucky to beat real inflation.

Additionally, the fees associated with “paper funds” can be quite onerous, nor are they particularly convenient. With a large portfolio, decisions often cannot be immediately actualized until they run through the brokerage chain of command.

The blockchain markets provide liquidity, ease of use, and universal accessibility — no traditions, no customs, no limitations. This next-gen revolution will forever change Wall Street, and that’s what the bankers fear most.