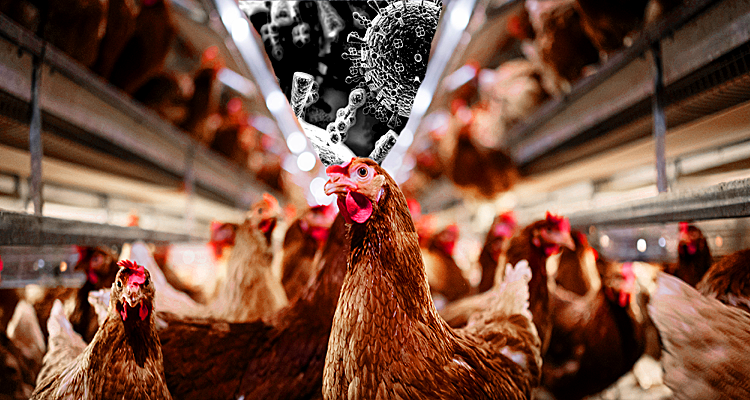 My last expedition to the supermarket was in early March for a monthly shopping experience and the latest inflation shocker. Today’s headline originated in my food cart this morning after picking up some precious eggs from the dairy section that’s been devoid of half-and-half for weeks. The price of a dozen large brown babes nearly doubled since last month, and the amount for a premium brand that’s birthed by chicks on a free-range and non-GMO farm are extraordinary. Eggs are a staple in my ketogenic diet because they’re highly nutritious and known to be a perfect food. My hair and nails love them, and a multitude of health benefits are worth it despite the steep and sudden rise in price.

Avian flu sharply driving up egg prices… “The price of eggs has soared in recent weeks in part because of a huge bird flu wave that has infected nearly 27 million chickens and turkeys in the United States, forcing many farmers to destroy their animals to prevent a further spread.” – MSN, Apr. 16 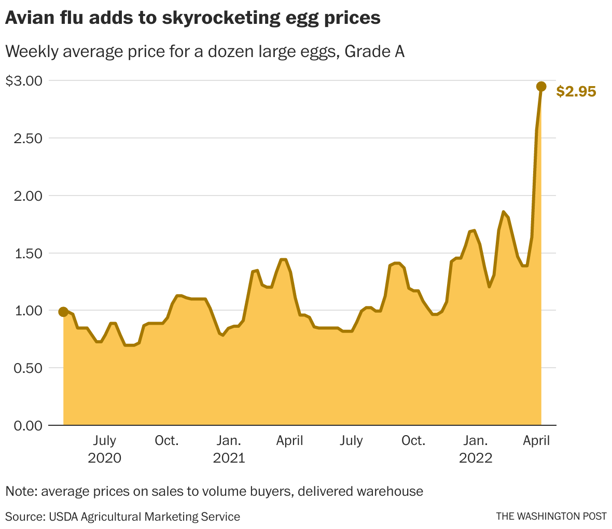 This newest addition to inflation and food shortages with a supply chain crisis afoot is due to an H5N1 strain of bird flu (aka avian flu or fowl plague) ripping across North America. Avian influenza is a highly contagious viral disease among domestic fowl that can inflict a 100% mortality rate on a flock. All types of birds are susceptible, but major outbreaks occur most often among chickens and turkeys that are raised in overcrowded commercial operations. The ripple effect of tight poultry meat and egg supplies will send retail prices higher and add to record-high food inflation that’s robbing you at the grocery store and gasoline pump.

“Biden swung his inflation bat ‘Lucille’ BEFORE Russia invaded Ukraine. Inflation under Biden rose from 1.4% to 7.9% before the invasion. Stands at 8.5% today.” – Anthony Sanders, Apr. 17 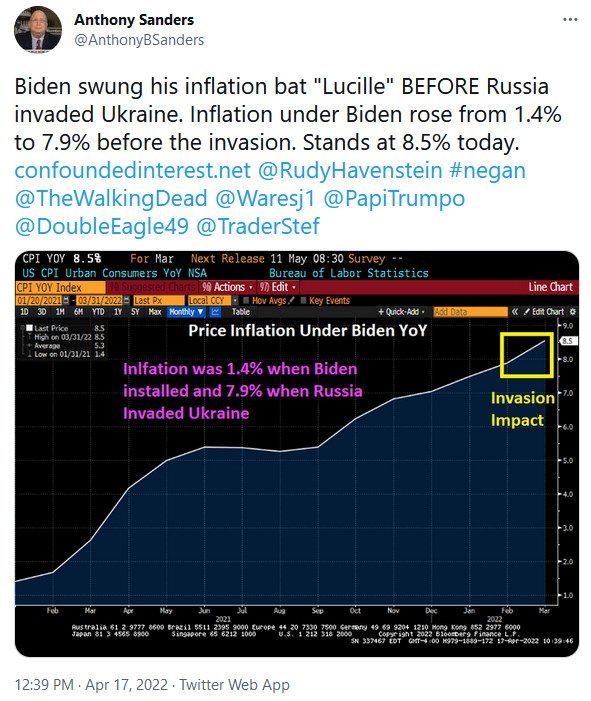 Current Bird Flu Situation in Poultry… “Preliminary genetic sequence data from some of the H5N1 bird flu viruses obtained from infected poultry suggests they belong to clade 2.3.4.4b, like most of the viruses recently detected in wild birds in the United States.” – CDC

Bald Eagles Are The Latest Victims Of Deadly Bird Flu Spreading Across U.S… “A flu infecting birds nationwide is being blamed for the deaths of three bald eagles in Georgia… Last month, two bald eagles in Vermont were found to be infected… North Carolina reported the death of a bald eagle… A bald eagle sick with avian flu was euthanized in Wisconsin… ‘If it is maintained in wild birds, it will continue to threaten wild bird and commercial poultry health. With bird migration it may even spread to Central America and South America.’” – The News & Observer, Apr. 17 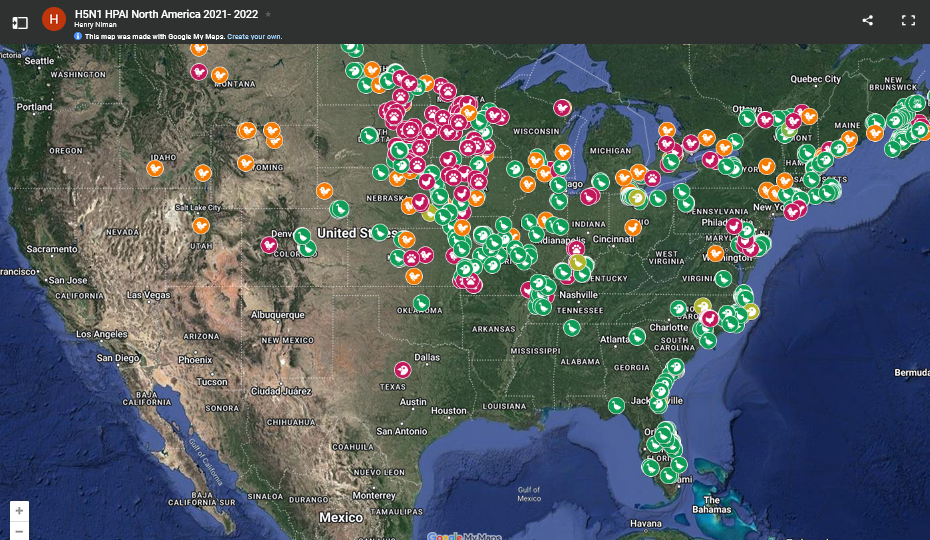 The worst outbreak of a highly pathogenic avian influenza (HPAI) in the U.S. poultry industry happened in 2014-2015 and wiped out more than 50 million chickens and turkeys either by the virus or by culling to stop its spread. That outbreak created spot shortages of eggs in grocery stores across the country.

‘You got it’: how bird flu turned one US farmer’s life upside down… “Greg Langmo’s decades-old business was among those hit when a lethal strain decimated poultry barns across America… Langmo was one of 211 American commercial poultry farmers who battled bird flu during the 2014–15 outbreak, the worst the $40bn (£31bn) US poultry industry has experienced. Twenty-one flocks on backyard farms were diagnosed and destroyed. Nationwide, more than 50 million chickens and turkeys died from the virus or were killed to control it. American commercial poultry farmers lost about $1.6bn. The US poultry industry lost an estimated $3.3bn.” – The Guardian, Sep. 2020

Since January, the USDA detected H5N1 in tens of millions of wild birds and domestic and commercial flocks. The latest cull count stands at 27 million chickens and turkeys to try and prevent the virus’s spread. It’s possible that people who work with an infected flock could contract the virus. According to the World Health Organization, strains of HPAI infected 864 people between 2003 and 2021 with half of those cases resulting in death.

Ancestors of H5N1 were first detected in geese in China in 1996 and the current strain was first sequenced in Europe in 2020. This year’s epidemic appears to be more geographically widespread and growing. It’s important to keep any chickens and turkeys being raised in backyards or small farming operations away from wild birds to help prevent the virus from entering the human food chain. Be sure to cook your eggs thoroughly and poultry meat to a temperature of 165 degrees Fahrenheit.

Egg prices have nearly tripled since November… “‘We are above and beyond the rate of spread we saw in 2015,’ Ferguson said. ‘Last time, 81% of the cases were in the fourth and fifth month as things exploded. What chicken egg prices did last time affected the market for years. We are two months into the outbreak now, and the safety protocols haven’t worked. I don’t want to be a Chicken Little, but I think it’s going to be worse than last time.’” – Washington Post, Apr. 16

Attack on Bodega Bay – The Birds (1963 by Alfred Hitchcock) 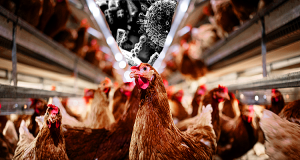