Military spending. Out of all the issues that spark often vitriolic debate in Capitol Hill, the defense budget remains untouchable. Largely, this dynamic is due to an oft-told message: spending on our military, no matter how expensive, is vital to our national security.

But how often will we hear this mantra until our elected officials do something about rapidly-escalating fiscal deficits? Apparently, up until complete and total financial ruin. As Washington demonstrated just until recently, very few things – including an extended government shutdown – can motivate politicians.

In addition, our society has an almost religiously cult-like adoration of the military. Questioning the military is tantamount to political and social suicide. In an arena that has devolved into bitter partisanship, it’s extremely curious that we find consensus on the defense budget.

Again, since the American culture ties this budget to national security, the idea of military spending remains sacrosanct. But it’s a red flag that the two major parties won’t vigorously debate how the government spends those funds.

But an even bigger, gloomier warning is the trend in expenditures versus performance.

Military Spending Up, National Security Down

According to The Heritage Foundation’s 2014 annual report, “Index of U.S. Military Strength,” our armed services in total measured “marginal” in operating capacity. Among the individual branches, only the Air Force ranked as “strong.” The rest came in at marginal.

Naturally, the common retort among conservatives is that former President Barack Obama gutted the military. Indeed, the hard statistics play this out. During the Obama administration, growth in military spending averaged -0.33%.

Famously – or perhaps notoriously – Donald Trump ran a campaign partially built on promises to boost the defense budget. To his “credit,” President Trump made good on his word. In just two years in office, he lifted the defense budget to an average of 3.2%. 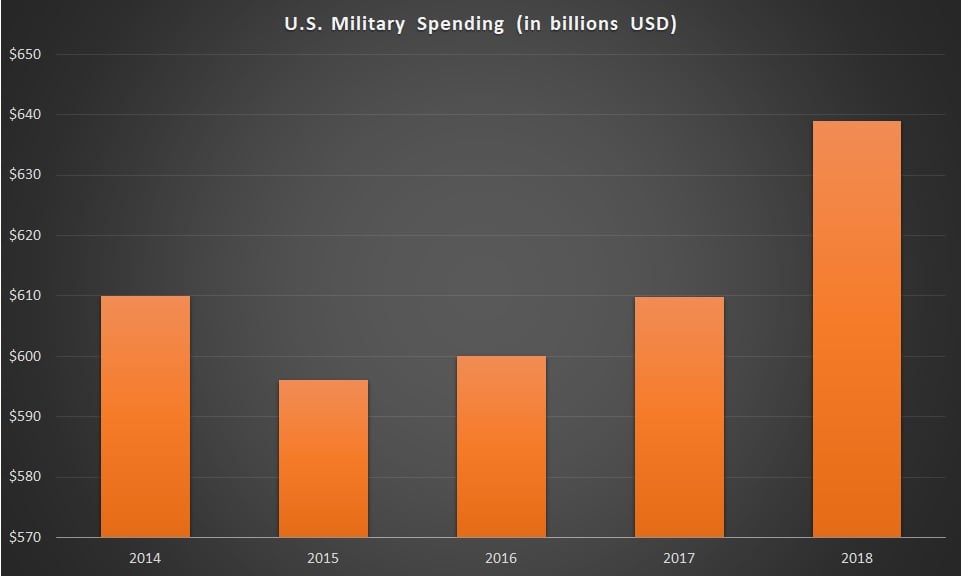 But this is where I diverge with the traditional (brainwashed) conservative, of which I used to be one. Most Americans fail to ask a simple question: is any of this military spending actually effective for our national security?

While the knee-jerk reaction is yes because ‘Murica, reality tells us a different tale.

We’re Getting Little to Nothing for Our Tax Dollars!

In the latest reading from the “Index of U.S. Military Strength,” our total operational capacity remains marginal. However, we’re actually much worse off than the initial assessment suggests.

First, the Air Force lost its lofty “strong” ranking. As of 2018’s assessment, our air superiority is only marginal. Not only that, the Air Force’s readiness dropped to “weak.” Four years prior, the index rated both capacity and readiness as strong. Only capability represented the outlier as marginal.

Second, the Marine Corp fell to a weak rating. Specifically, capacity and readiness underperformed, while capability scored marginal. During Obama’s “limp, cowardly” administration, the Marine’s only deficit was capacity.

So what changed besides our weakening military? The answer: $2.44 trillion. That’s the amount our government spent on the defense budget in the four years between 2014 and 2018. But what do we have to show for it? Ironically, a reduced ability to competently enforce our national security.

If the Department of Defense was a corporation, it would have filed Chapter 11 bankruptcy decades ago. But it’s still allowed to suck the blood out of taxpayers because Jesus and ‘Murica.