In April of 2017, the Republican-controlled Senate confirmed Neil Gorsuch as a Supreme Court justice, replacing the late Justice Antonin Scalia, who passed away in February of 2016. The vote was 54-45 and included three Democrats that broke ranks in support of Gorsuch.

Back in 2014, the GOP took back the Senate majority, blocked Obama’s nomination of Merrick Garland to replace Justice Antonin Scalia, and then Trump won the presidency with an electoral landslide in 2016. Gorsuch, who is relatively young in comparison to the existing court, controversy-free, and of the conservative pedigree that secures a confirmation without a catfight, did not sail through so smoothly. In fact, he was unanimously confirmed by a voice vote to an appeals court position back in 2006. Despite all the positives on his side, along with a Scalia-like right vs. wrong constitutional jurisprudence, the Democrats were furious and had a sore wound to lick due to Trump rocking the boat with his presidential win. Gorsuch would restore the court’s conservative majority that existed before Ronald Reagan appointed Justice Antonin Scalia, which is why the Democrats opposed Gorsuch from the day the POTUS nominated him and were intent on blocking his confirmation.

The Republicans launched the “nuclear option” for Gorsuch, which reduced the number of votes required from 60 to 51. Democrat Senate Majority Leader Harry Reid set a nuclear precedent back in 2013 that allowed Obama-era judicial nominees to confirm with a simple majority without filibuster, a poker hand play the Democrats likely regret since Hillary sunk their ship with a failure to win the 2016 presidential election.

Enter stage right part two this week, Brett Kavanaugh is the most experienced nominee to replace Justice Kennedy, a veteran of D.C. sitting on its Circuit Court of Appeals since 2006 known as having a keen legal mind. Here is one of the least drama queen infested question and answer sessions from his confirmation hearings this week, with Senator Lindsey Graham questioning Kavanaugh on day two.

How Judge Kavanaugh’s Clear And Disciplined Writing Will Affect The SCOTUS… “legal community offered bipartisan praise for the nominee. In particular, Judge Kavanaugh is widely credited as a disciplined legal writer who produces clear and tightly reasoned opinions… Justice Kennedy, who Kavanaugh will replace, was often described as the Court’s swing vote. While Kennedy certainly frustrated conservative jurists, he voted with conservatives on a clear majority of cases over his three decades on the Court. On controversial cases arising under the First and Second Amendments, Kennedy was a reliable conservative vote. On controversial issues, such as campaign finance and gun rights, Kavanaugh will likely reach similar results. Current law would not be seriously affected one way or the other.” – Forbes, Jul. 31

If you had only watched brief portions of the hearing over the last three days, you would clearly see and hear that Kavanaugh speaks carefully and decisively while adding pertinent context within his answers. That quality frustrated many on the judging side of the room that insisted on yes or no, black and white answers. In the real world, such simplicity cannot exist when deliberating the rights and laws for the people. Kavanaugh had a distinct style in pulling together thoughts in a clear and concise manner, without hesitation or loss of focus, despite rude interruptions from 50% of the judges or constant crybaby protests emanating from the gallery.

The Supreme Court’s days as a super-legislature are over, and Democrats aren’t happy about it… “On Day Two of Judge Brett Kavanaugh’s Supreme Court confirmation hearings… Democrats placed themselves one after another into Kavanaugh’s seat on the District of Columbia Circuit Court of Appeals to second-guess rulings, which is only natural for those who think the courts are there to make policy decisions… All these opinions about Kavanaugh’s rulings have one thing in common: They come from politicians who seem to think judging is a lot like what they do for a living. But judges don’t make policy, and the Supreme Court is not a super-legislature. That’s why a good judge who decides cases based on law and precedent will not like all the outcomes of the cases he hears. Federal judges don’t run for their seats or make promises on how they will vote. And they are not supposed to make rulings that set the policies that affect millions of Americans. Policy is supposed to be a function of the democratic process, not something created by a lifetime-appointed nine-person oligarchy.” – Washington Examiner, Sep. 6

With the likelihood of Kavanaugh taking a seat on the SCOTUS, the court may become another win for small and big businesses alike. The SOCTUS has issued several rulings in recent years that were friendly to business interests, and Kavanaugh could solidify a pro-business atmosphere. He is known to be critical of regulations put forth by a burdensome government bureaucracy that is inherent in federal agencies and a source of criticism by small and big businesses. Issues that may fall into the realm of regulation could be pharmaceutical pricing, affordable housing, global warming theory, the Environmental Protection Agency, minimum wage, labor law, unions, or the Consumer Financial Protection Bureau (CFPD) spearheaded by the Obama Administration, just to name a few. It is not only the conservative side of the bench siding with business because at least two (and in some cases all four) liberal justices sided with business interests in recent court rulings as noted in The Atlantic magazine.

Big Business Keeps Winning at the Supreme Court… “While the nation focused on big, controversial cases, corporate America was quietly racking up a remarkable string of victories in the high court this term.” – The Atlantic, Jul. 2018

Explaining The Supreme Court’s Recent Sports Betting Decision… “Does this mean sports gambling is now legal throughout the United States? No. The court ruling does not, in itself, change the legality of sports betting anywhere. However, the individual states are now free to pass statutes that would legalize sports gambling within their borders.” – Forbes, May 2018

Kavanaugh is also viewed as one spoke in conservative legal circles that question if courts have granted too much leeway to government agencies to make law, even in the absence of congressional directives, aka Chevron Deference.

“One of the most important principles in administrative law, The “Chevron Deference” is a term coined after a landmark case, Chevron U.S.A., Inc. v. Natural Resources Defense Council, Inc., 468 U.S. 837 (1984), referring to the doctrine of judicial deference given to administrative actions. In Chevron, the Supreme Court set forth a legal test as to when the court should defer to the agency’s answer or interpretation, holding that such judicial deference is appropriate where the agency’s answer was was not unreasonable, so long as the Congress had not spoken directly to the precise issue at question.” – Cornell Law School

Lady Justice has a set of scales that do not always lean in your favor, and the outcome level of failure or success is dependent upon your own point of view.

The Supremes – Everything Is Good About You (Stereo Version)

Hat tip for the headline picture to The Onion 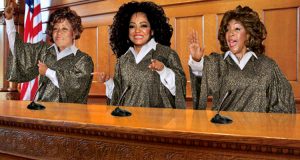