Over the past weekend, President Trump caused an uproar when he suggested that professional football players who protested the national anthem should be fired. In actuality, it wasn’t the sentiment that sparked a controversy; rather, it was his tone and word choice, which included a mild vulgarity.

Responding sharply to the Trump administration, players from around the National Football League locked arms in solidarity. Many knelt before and during the national anthem to draw attention to police brutality and the targeting of African Americans. As expected, these NFL protests met a fiercely divisive audience.

Several members of the mainstream media lauded the “bravery” of those participating in the NFL protests. Conservatives, on the other hand, blasted what they saw as an attack of patriotism and common decency. Few see the irony that true patriotism often calls for bold acts of free speech, sometimes to the point of civil or deliberate disobedience. 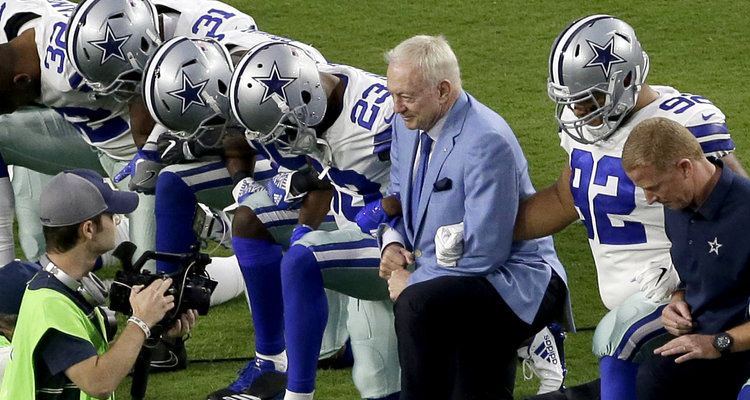 I’m particularly concerned with the argument that the NFL protests grievously offend our armed-service members. According to this line of reasoning, veterans fought for our freedoms, with some making the ultimate sacrifice. To protest the anthem is an affront to their service and their memory.

It’s a common argument that’s been around longer than these NFL protests. During the George W. Bush administration, conservative media blasted critics exercising their free speech regarding the Iraq and Afghanistan wars. “Soldiers died for your right to protest,” was a common refrain.

But if free speech cannot criticize the military industrial complex, is it really free? What seemingly most Americans fail to realize is that good men and women gave their lives so that others can have freedom. This means that we must entrust all Americans the dignity to make their own choices, good or bad.

To force anyone to believe in a certain way (either through outright coercion or social pressure) is not freedom nor patriotism, but rather, tyranny.

Frankly, I’m startled at how quickly the NFL protests have devolved into strawman arguments and non sequitur. More critically, a divided nation has become even more divided. To put it bluntly, this dynamic has the hallmarks of elitist social engineering.

If we’re being truly honest with ourselves, we’ll recognize that African Americans have a bum deal in this country. Law enforcement officers deliberately target them, their communities are cesspools of violence and despair, and their social mobility is limited, even compared to other minorities.

Again, if we’re being honest, we consciously and subconsciously avoid blacks. How many black friends do you have? Which black schools have you attended? Would you let your daughter date a black guy? America avoids these issues by not talking about them, and sweeping them under the rug. The vitriol against the NFL protests is based on the players forcing us all to confront our black prejudices.

The true irony is that we could use our free speech to talk openly and honestly about race. I believe most people would have respect for even outright racist arguments, so long as they were conveyed without malice.

Instead, we avoid these honest discussions through demonization of others. By calling truly peaceful protesters (after all, participating NFL players are taking a knee and nothing more) traitors, we shift the framework from racism to patriotism. And under the guise of patriotism, we are so easily led into a controlled black-white paradigm.

It’s us against them.

The only problem is that we never ask who defines “us” and “them.”