Higher Stealth Taxation and Liquidity Crunch on the Horizon

As we rapidly approach tax season, we are reminded that there is a silent partner in everything that was earned in the prior year. Taxation causes you to do things you wouldn’t have done if all things were equal. Because of taxes, you’ll blindly put money into Wall Street to be tied up until you are almost 60 so you can defer paying taxes. For many, you might even move from one state to another to escape the grips of tyrannical government, or if you have the means and guts, you might even relocate to a tax haven like Puerto Rico to retain some of your hard-earned money. Regardless, taxes are money down the drain that could have gone to investments into your own future, spent in the economy to create another job, or even given to someone in need that you’ve identified.

But instead, as a country, we’ve opted for the government to be in charge of our charity and, to a large degree, our lives. The snake is eating its own tail, and there will ultimately be more people on the wagon that contribute to it.

Essentially, 25% of the U.S. population is receiving some form of government welfare from Medicaid, SNAP, Housing Assistance, Supplemental Security Income, TANF, and General Assistance. Unbelievably, roughly half pay no federal income tax because they have no taxable income and the other roughly half get enough tax breaks to erase their tax liability, explains Roberton Williams, a senior fellow at the Tax Policy Center. 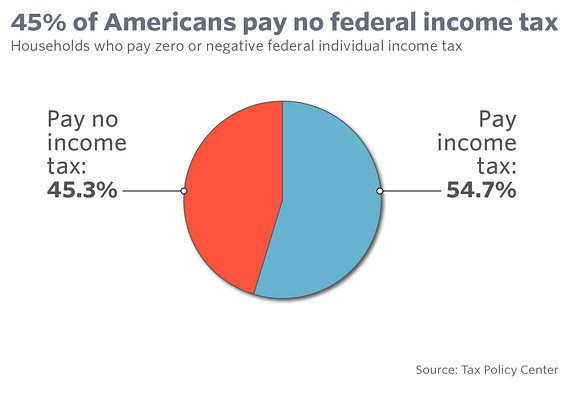 Don’t get me wrong, I’d be happy if more people didn’t have to pay taxes, but not at the expense of another person’s sweat and labor. If there is a societal need, I believe the free market will pay for it.

As we’ve covered time and time again here, the credit bubble is exponentially expanding and past the point of no return.

There are liquidity problems and a trigger point for the economy showing its ugly face. Just to keep the bubble going, credit has changed to accommodate the lending sector.

We are talking about financial engineering of the credit markets that is happening completely under the radar. It’s a lowering of standards, so much so that today, almost two-thirds of Ginnie Mae’s guaranteed securities are issued by independent mortgage banks. The problem is they are going far and wide with dependency on credit lines, securitization involving multiple players, and more frequent trading of servicing rights, and all of this has created a new mess for the credit markets that has yet to hit. 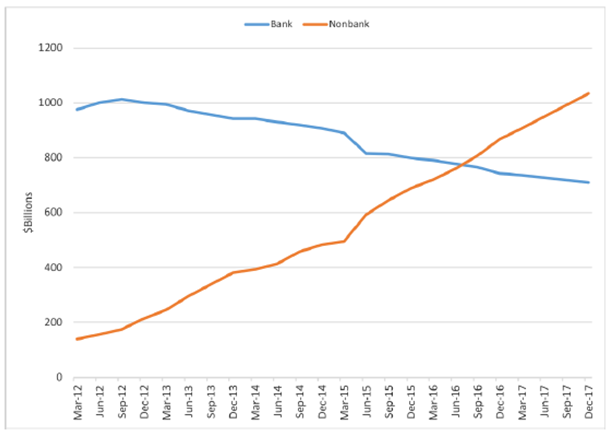 This divergence away from the ability to raise money “traditionally” and going to further lengths is eerily starting to remind me of stated income documentation and “no money down” loans to anyone that has a heartbeat. If you could fog a mirror, you got a loan. Unfortunately, this is a sign that the juice in the system is fundamentally running dry.

On a perception basis, the masses couldn’t be any more disconnected.

The “good” news is that luck has been on the side of the positive conventional propaganda narrative, so much so that small business confidence has surged to its highest levels since 1983. 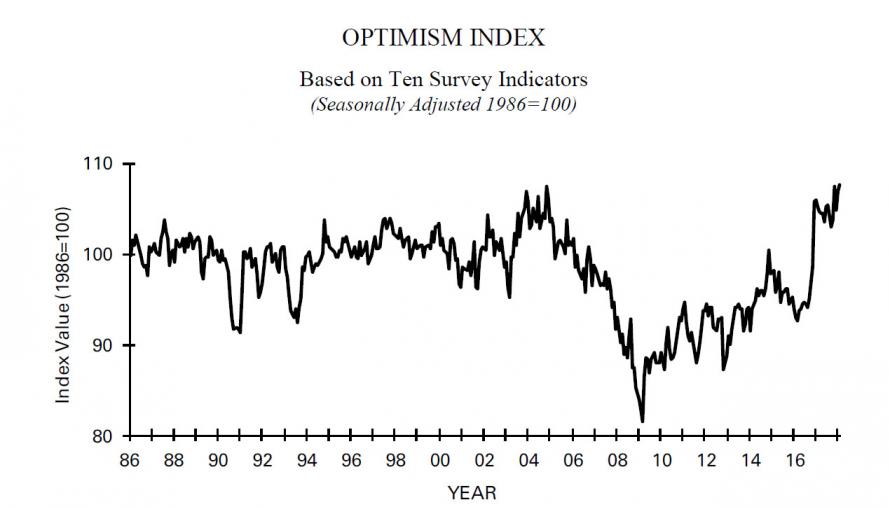 Sometimes the light at the end of the tunnel is the train that is about to run you over.

I think volatility in the markets is as certain as the uncertainty in the Trump White House. By the way, with Rex Tillerson being fired from the Secretary of State position, ZeroHedge reported that the Trump White House is now losing one senior staff member every 17 days. And as far as I’m concerned, it’s a sign of the times and the real problems that are facing the political and geopolitical landscape.

Circling back to taxes, raising taxes on people is unpopular whether you are a Democrat or Republican. The left wants to raise taxes on the rich, and the right claims they want to lower taxes across the board without actually cutting spending.

The only way out of this is through printing – and lots of it. It’s a hidden tax, and the ones who get hurt the most are those without assets because assets, whether you’re talking about stocks, real estate, gold, or cryptocurrencies, will advance one’s purchasing power in the event of a dollar devaluation.

Of course, there are bail-ins and bailouts that are both on the table, and there’s ALSO essentially a tax on depositors in the event of a bail-in, or a stealth tax in the event of a printing event bailout to rescue the financial markets on the brink of failure.

Do you remember the days when it was practical to hide money under your mattress and store it there for years? When the dollar was backed by gold, there actually was something to that. Today, holding cash is akin to holding a hand grenade with the pin pulled. But as many of you know, most Americans don’t even have CASH to be worried about evaporating on them. Nearly 6 in 10 Americans don’t have enough savings to cover a $500 or $1,000 unplanned expense, according to a new report from Bankrate.

Nonetheless, nothing lasts forever, and the measuring stick for the stability of the financial system is the dollar.

This is why I’ve spring-loaded my portfolio with precious metals, stocks, real estate, asset-backed lending platforms, and strategic alliances to strengthen my financial moat. I suggest you do the same.

This is not the time to be 100% financially dependent on a boss that could fire you, leaving you and your family on the street. It’s time for you to have financial freedom in your life and take control of your destiny.

Refuse to be average.