The 2020 Census is approaching your doorstep – literally. I had my own experience a couple months ago in the dead of winter, which began with no questionnaire and a FedEx letter stuffed in the doorway of my home. The following day there were business cards sprouting out of the patio door molding at the opposite side of the property.

After a wicked snowstorm dumped a ton of snow a week later, the inclement weather flipped from sub-zero to near 50 Fahrenheit, along with beautiful blue skies and puffy white clouds for 24 hours. It was a rare opportunity in between polar vortexes in New England that offered warm sunshine to assist in pecking away at the ice skating rink that forms at the base of my driveway. The very moment I began making some real progress on the project, a huge 4×4 pickup truck rolled onto my driveway and parked itself directly on top of the ice pack I was diligently sweating bullets over before the sun went down and evening icing over begins.

A woman late in her years climbed down out of that monster truck and introduced herself as a representative of the Census Bureau. One of her hands was busy with a clipboard while the other fussbudget handled a laptop that she plopped down on the hood of my immaculate Jetta (example only). She inquired as to if I had received the letter and business cards delivered to this address. Yes, ma’am, and could we please expedite this quickly so I can remove the ice you have parked your snow killer on. She winced with a quick glance down the driveway and shook her ice cleat feet to free them of frosty debris that accumulated due to my sweat equity.

Unfortunately, I was caught off guard by that unannounced visit and not well-read on my rights in such a process, so in hindsight, there were a few questions answered that were unnecessary. Once she journeyed down a more personal route, such as health, housing, and employment specifics, the intuitive gut kicked in and declined to answer further questioning. That decision was met with a plethora of reasons why the information is necessary in order for the government to do so and so. Fortunately, my knowledge in civics said otherwise, and we kindly agreed to disagree. She left with a promise to return on a later date and conduct follow-ups on a monthly basis.

Within a few days, another FedEx letter arrived. That letter was addressed to my name instead of a “resident,” and it contained a “thank you” letter for the participation and cooperating by answering questions, and it thanked me for my continued cooperation. Over the next few weeks, phone numbers I did not recognize and private lines were calling my cell phone more often than usual. I don’t know about you, but cell phone spam is horrendous nowadays, and I never answer an unrecognized number. Additional business cards from the bureau began to litter my property. An unannounced evening visit in the middle of a hot, homemade dinner was the last straw.

To make a long story short, I politely made it clear that nothing changed since the last visit and I would greatly appreciate the unannounced visits ending. I noted that this is a private community with “no solicitation” signs posted, so please stop littering on my property and stop sending expensive FedEx letters with my tax dollars. She threw up her hands and stomped away while exclaiming that I just do not understand. It has been a delightful month without a peep, and spring is in the air.

The Sole and Express Purpose of the Census – Tenth Amendment Center

How to Legally Refuse to Participate in the Census Survey – TruthIsTreason

“Representatives and direct Taxes shall be apportioned among the several States which may be included within this Union, according to their respective Number…  The actual Enumeration shall be made within three Years after the first Meeting of the Congress of the United States, and within every subsequent Term of ten Years, in such Manner as they shall by Law direct.”

To Whom it May Concern,

Pursuant to Article I, Section 2, Clause 3 of the Constitution, the only information you are empowered to request is the total number of occupants at this address.   My “name, sex, age, date of birth, race, ethnicity, telephone number, relationship and housing tenure” have absolutely nothing to do with apportioning direct taxes or determining the number of representatives in the House of Representatives.  Therefore, neither Congress nor the Census Bureau have the constitutional authority to make that information request a component of the enumeration outlined in Article I, Section 2, Clause 3.  In addition, I cannot be subject to a fine for basing my conduct on the Constitution because that document trumps laws passed by Congress.

“Neither branch of the legislative department [House of Representatives or Senate], still less any merely administrative body [such as the Census Bureau], established by congress, possesses, or can be invested with, a general power of making inquiry into the private affairs of the citizen. Kilbourn v. Thompson, 103 U.S. 168, 190.  We said in Boyd v. U.S., 116 U. S. 616, 630, 6 Sup. Ct. 524,―and it cannot be too often repeated,―that the principles that embody the essence of constitutional liberty and security forbid all invasions on the part of government and it’s employees of the sanctity of a man’s home and the privacies of his life.  As said by Mr. Justice Field in Re Pacific Ry. Commission, 32 Fed. 241, 250, ‘of all the rights of the citizen, few are of greater importance or more essential to his peace and happiness than the right of personal security, and that involves, not merely protection of his person from assault, but exemption of his private affairs, books, and papers from inspection and scrutiny of others.  Without the enjoyment of this right, all others would lose half their value.’”

A Citizen of the United States of America

There are many informative videos on YouTube concerning the topic at hand, including a brief message from Ron Paul. I think this one drives the point home.

The American Community Survey And The Census Bureau – ItalianLad 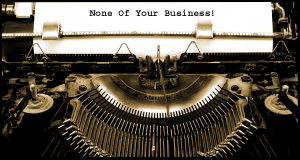