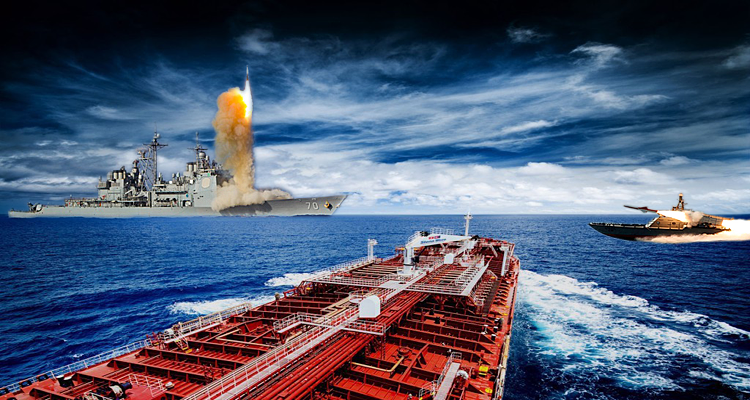 Saudi Arabia, the world’s largest oil exporter, said on Thursday that it is suspending all oil shipments through the strategic Red Sea shipping lane at Bab al-Mandeb Strait after an attack on two “very large crude carriers” (VLCCs) by Iran-backed Houthi Rebels. The three-year war in Yemen is increasingly viewed as a proxy war between Iran and Saudi Arabia and its allies, and missile fragments from previous attacks upon Saudi assets were determined by the U.N. to be Iranian-made munitions.  Both oil tankers are operated by the Saudi National Shipping Company, Bahri, and each were carrying two million barrels of crude produced by the energy giant Saudi Aramco.

The decision to suspend shipments through the strait is taking place while oil markets already appear stretched for the second half of the year.  U.S. sanctions are slated to take effect in November on Iran’s oil industry and are expected to have an impact on the global supply of oil. The current situation will likely escalate tensions with Iran that already exist over a defunct nuclear deal. Recent attempts to hit Saudi tankers and oil installations did not have much of an effect, but this attack prompting the Saudis to suspend shipping over security concerns clearly raises the bar a few notches.

The shipping lane sits directly off the coast of Yemen, Djibouti, and Eritrea.  It connects the Red Sea with the Arabian Sea and is one of the world’s key shipping lanes for petroleum products.  Shipments include crude oil for European markets via the Sumed Pipeline, which links the Red Sea with the Mediterranean through Egypt and the Suez Canal.  It is also an important route for European-refined oil products to reach global markets. Nearly six million barrels of crude oil and refined petroleum products traverse the strait on a daily basis. 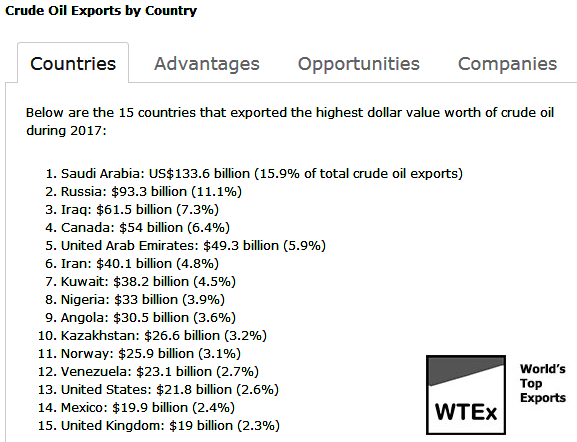 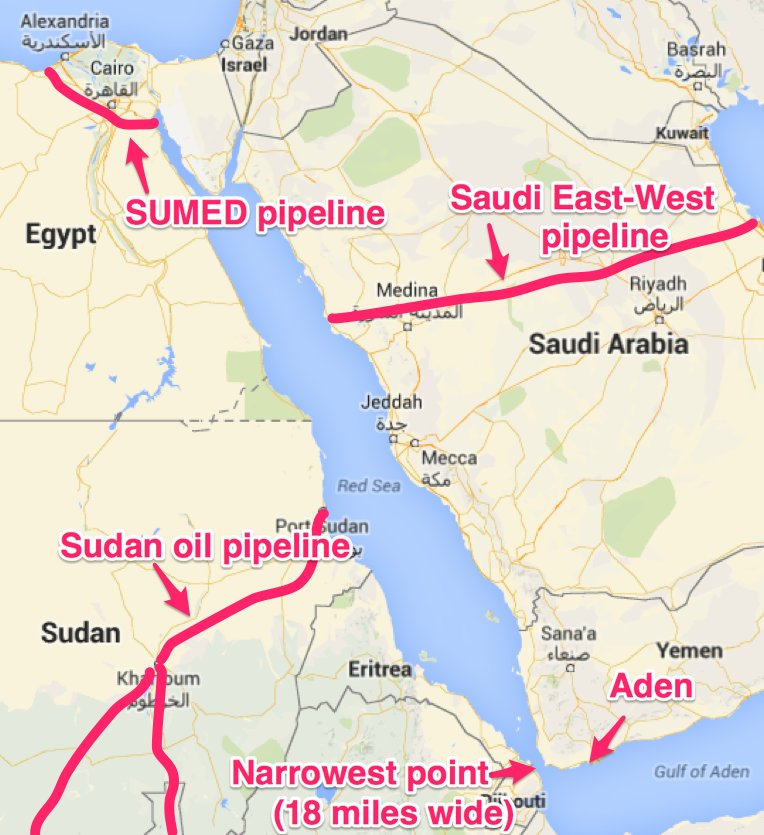 War in Yemen could threaten one of the world’s most important oil choke points… “The Bab al-Mandeb Strait controls access to multiple oil terminals and to an oil pipeline co-owned by state companies from Egypt, Saudi Arabia, the United Arab Emirates and Qatar… It is 18 miles wide at its narrowest point, limiting tanker traffic to two 2-mile-wide channels for inbound and outbound shipments… The closure of the strait — or the perception of added risk of closure — could have huge consequences for the global oil market.  Closure could keep tankers from the Persian Gulf from reaching the Suez Canal or SUMED Pipeline, diverting them around the southern tip of Africa, adding to transit time and cost. In addition, European and North African southbound oil flows could no longer take the most direct route to Asian markets via the Suez Canal and Bab el-Mandeb. Sudan and South Sudan would also have their only oil terminal cut off from Asia-bound trade, as the countries’ shared pipeline terminates in Port Sudan. And it would cut off Indian Ocean access to the Mediterranean Sea as well as the SUMED pipeline.” – Business Insider, Mar. 2015

Concern surrounding the strait and its shipping lanes is not new, as Somali Pirates began hijacking commercial shipping over a decade ago when the Somali Civil War eliminated an effective Coast Guard to police Somali coastal waters and fishing grounds.  When foreign ships began dumping waste and violating its fishing grounds, militias formed to pirate ships and bring international attention to their plight, but that eventually devolved into outright theft on the high seas and high-stakes international kidnappings.

I suspect the attack by Houthi Rebels on the Bab al-Mandeb Strait is due to the POTUS killing the Iran Nuclear Deal and imposing sanctions on Iran’s oil industry.

“The Red Sea, which was secure, is no longer secure with American presence.  Trump should know that we are a nation of martyrdom and that we await him” – Major General Qasem Soleimani, Iranian Revolutionary Guard 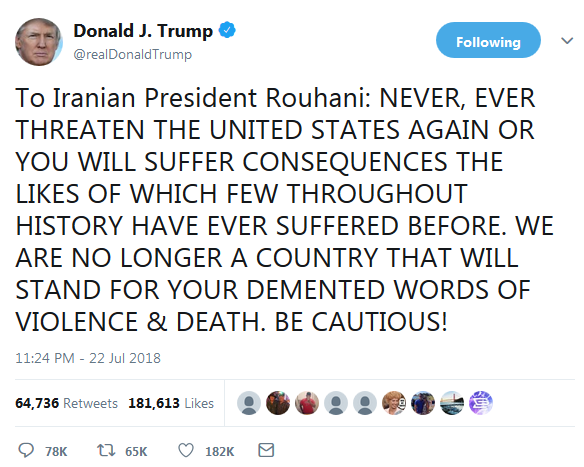 Disrupting commerce through the strait is a convenient tactic by Iran, using its Houthi proxy in Yemen to inflict some economic retribution upon the West and arch-rival Saudi Arabia from a distance instead of blockading the Strait of Hormuz on its own border.  The Strait of Hormuz is responsible for nearly twenty million barrels of oil a day and comes with a much higher price and political risk for Iran.

The Most Important Waterway in the Oil World – Closing the Strait of Hormuz… “Despite the war of words erupting between Tehran and Washington, it is unlikely Iran’s government is prepared to take such a drastic step now or in the immediate future. First, the cost to Iran’s economy could be severe, at a time when conditions within Iran are already unstable. Iran’s currency lost 14 percent of its value against the dollar the day Trump issued his tweet.  The rial has lost about half its value in the last months, prompting demonstrations inside Iran. The United States is poised to re-impose sanctions on Iran in November, including an attempted universal embargo of Iranian oil… It is certain that they will have a deleterious effect on Iran’s economy, one that Iran is unlikely to aggravate by choosing to fight a costly and, ultimately, pointless war against the GCC. That is the second reason why Iran is unlikely to close the Strait.  Third, while Rouhani and Iran’s military leadership have expressed support for the idea, ultimately the decision rests with Iran’s Supreme Leader, Ayatollah Ali Khamenei. While he supported Rouhani’s threat to close the strait, his comments were measured and relatively non-committal.” – Oilprice.com, Jul. 25

The suspension of shipments through the Bab al-Mandeb Strait has already added $1.50 USD to the cost of a barrel of oil in one day.  Any extended delay of shipments or an escalation in military action from either side may result in serious repercussions for the price of oil and financial markets.

Is targeting of Bab Al Mandeb by Houthi militias linked to Iranian threats?… “The Iran-backed Houthi movement in Yemen said on Wednesday that one of its drones had attacked the Saudi state oil company Aramco’s refinery in Riyadh, according to Houthi-run al-Masira TV, based in Yemen. Yemeni army also detonated naval mines planted by the Houthi’s on the west coast off Hajjah province. The attack pushed Saudi Arabia to suspend all shipments of crude oil passing through the Straits” – Al Arabiya, Jul. 26

Saudi Arabia WAR THREAT: Oil tankers BOMBED – Saudis BAN exports through Red Sea straits… “The Houthis’ Al Masirah TV had said on Twitter that they had targeted a warship named the Dammam off the western coast of Yemen in what the group later said was a missile attack. In a separate statement carried on the Houthi-run SABA news agency, the group said it had also targeted a coalition frigate off the coast of al-Durayhmi in southern Hodeidah.” – ExpressUK, Jul. 26