Sell Out: How Outsourcing Led to Coronavirus Vulnerabilities

As it should be, currently, everyone’s focus is on the coronavirus: government agencies are deploying measures – some very draconian – to stem the tide while regular folks are stocking up on essentials. Over time, though, I believe we will eventually examine the catalysts for our present vulnerability. Clearly, one of them is – if not the central cause – is outsourcing.

As you know, outsourcing is the clinical term that society has come up with to describe shipping jobs overseas. But what you don’t see in the bottom line of major corporations is the devastation that it wreaks on millions of American families. Growing up, we’ve all been taught the lie that if you study in school and work hard, you’ll get rewarded.

No wonder why the so-called American Dream is dying! This drivel is only disseminated in the hopes that others will buy into it. Essentially, it gives corporate executives time to extract every ounce of productivity from their workers until the outsourcing begins.

The corporate world is a cruel one, which is why so many are choosing to avoid it altogether. Furthermore, the frustration, anxieties and stress that comes about from this cutthroat environment is surely one of the causal factors of the opioid crisis.

People have been dehumanized by the process and then sold out by their own. Naturally, they seek coping mechanisms, wondering if someone will grant them justice.

Perhaps, the coronavirus is that reckoning.

Too Much Outsourcing Left Us Slaves to the Chinese

By the numbers, I understand why American corporations began outsourcing to China. Labor is much cheaper over there. Plus, with the Communist Party in place, business executives are assured continuity of governance and politics. And so, the U.S. opened its hearts, minds, wallets and legs to the Chinese.

But those who truly valued this country and our national interests should have immediately recognized the problem of too much exposure to China, which is by every account an adversarial nation. But to justify this treason, corporate and political elites simply moved the goal post. Speaking cynically about the outsourcing phenomenon, Forbes contributor Kenneth Rapoza wrote:

In fact, many companies that source from China, like Apple, are part of so-called ESG mutual funds that invest in what that acronym stands for: companies good on the environment, good on social responsibilities, and with good corporate governance.

In other words, outsourcing American companies launched a disinformation campaign, emphasizing China’s positives while minimizing or ignoring its vast ethical violations. For the most part, this ploy has worked…until now.

The coronavirus proves that we have no leverage against China. Even if it implodes, the event will take us down with them. We’ve become too fattened off cheap Chinese goods and labor that we ignored its national security implications. We are paying for it today. 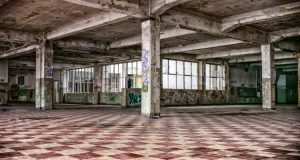