The world is awash with manipulation, deceit, and propaganda designed to alter one’s thinking. In today’s age of the 24/7 news cycle, information does not stop. Social media influencers, mainstream propagandists, and YouTube censorship are all designed to turn you into a mushroom. You know how the saying goes: “lock them up in the dark and feed them #$%^.” Well, if you follow Trump’s Twitter, you have not been lied to (entirely). He said he wanted QE4, low or negative interest rates, and DOW 30,000. Well, it looks like all of that is going to happen sooner than later. Deceit can only be deceitful for as long as people know they are being cheated. The centrally planned economy eventually flows down to the real economy, where you and I see the effects of this madness. Centrally planned liquidity injections find their way into the most scarce of resources. Natural resources are especially scarce and easily influenced by a non-scarce money machine. Let’s take a look at a few of the most scarce things on the planet that are making it difficult for money printers to hide their game. 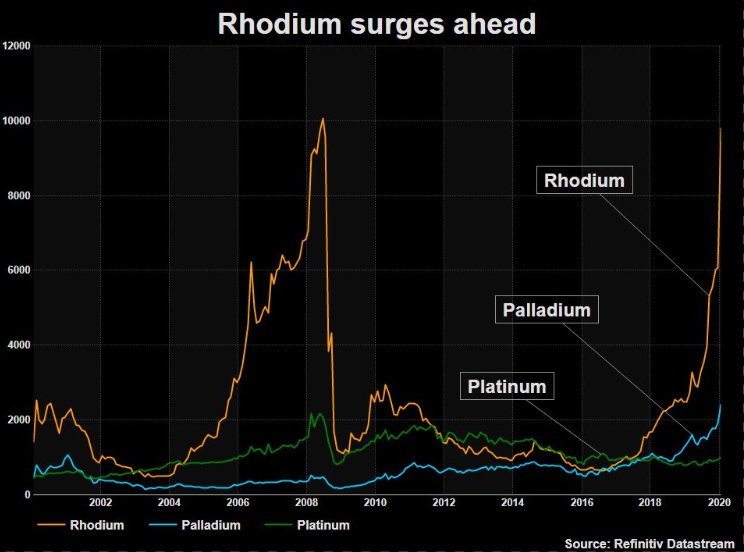 Rhodium and palladium are the scarcest metals used in the auto industry. Catalytic converters use rhodium and palladium for their conductivity. New regulations in China have created more demand for these metals than in previous decades. Palladium and rhodium are more efficient than platinum, which is why they are in high demand. The exponential rise in rhodium has happened in tandem with monetary crises. Bitcoin-like moves are possible because the market is extremely thin and there are no paper contracts settling price.

Palladium is similar, but the one major difference is that the LBMA has a price settling scheme on this very scarce metal. This chart of palladium shows that the pricing mechanism has clearly broken.

A fundamental reason for this exponential rise is the shortage of physical palladium.  The fractional paper scheme in any metal only works as long as the institution that’s set to deliver actually has the metal. What we are seeing is that the LBMA has manipulated futures contracts to act as physical metal, keeping the price suppressed. This has gone on for many years. Low “paper” prices give miners no incentive to mine. After all these years, little new production has come online in a metal that has industrial uses. This market is at a point where they have essentially depleted the stock of palladium while demand is at peak levels. When these entities actually take physical delivery of the metal, supply shocks overrun the paper for the physical market, moving price multiples higher. With virtually no new mines being opened due to this game, the only solution to this problem is palladium going to a much higher price level.  The whole precious metals complex is signaling higher inflation ahead. 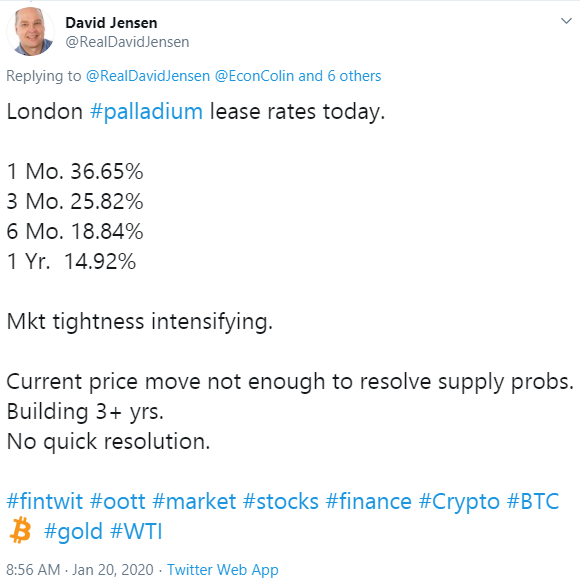 Interestingly, the London lease rates are showing that this condition has worsened over the last 3 years. Lease rates work on an annualized basis and can be explained in the following example. If Toyota needs 1,000oz. of palladium today then they will borrow 1,000oz. at 36% interest from Scotia Bank (this is just an example). This means that Toyota would then have to pay 3% back in 1 month. In March, Toyota would owe Scotia Bank 1,030oz. of metal. This is not settled in cash, but in actual physical metal. As you can see, this shortage and lease rate mechanism can only compound the problem if there is an increasing rise in metal being required.