The Zero Paradox: Why Bitcoin Will Always Be Unbreakable

How much would you pay for one share of Circuit City? Of course, the answer is zero — Circuit City, in its original format, has disintegrated. A new set of investors have bought out the brand name and intend to resurrect the consumer electronics retailer. That, of course, is no comfort to stakeholders that lost everything.

But Circuit City’s bankruptcy — indeed, the inglorious ranks of all bankruptcies — brings up an important, but often ignored point. A company’s publicly-traded securities would continue trading so long as 1) people wanted to trade it and 2) the firm maintained its equity in the markets.

This peculiar dynamic raises an odd question — what would happen if Circuit City continued to trudge on instead of declaring bankruptcy? Theoretically, so long as management didn’t privatize the retailer, Circuit City stock would find a market. Granted, that value would probably reside in the fractions of a penny, but it would still have value.

Hence, we have our “Zero Paradox” — a company stock, no matter how awful, can never go to zero unless the switch is turned off.

But what happens when the switch is always on? For hundreds of years, going back to the Tulip mania and prior, that was an impossibility. An equity share of a company was entirely levered to the existence of the company itself. If an organization ceased to exist, its equity is also zero, period.

But with the introduction of bitcoin and the concept of a cryptocurrency market, the entire paradigm of financial investment was shattered, not merely shifted. Digital currencies are not tied to anything other than the internet. Unless there is a way to “turn off” the internet, each and every cryptocurrency introduced will always have value.

I refer to this as “asymptotic value.” This means that a cryptocurrency like bitcoin could experience such widespread volatility that it could get infinitely close to zero, but never actually reach it. 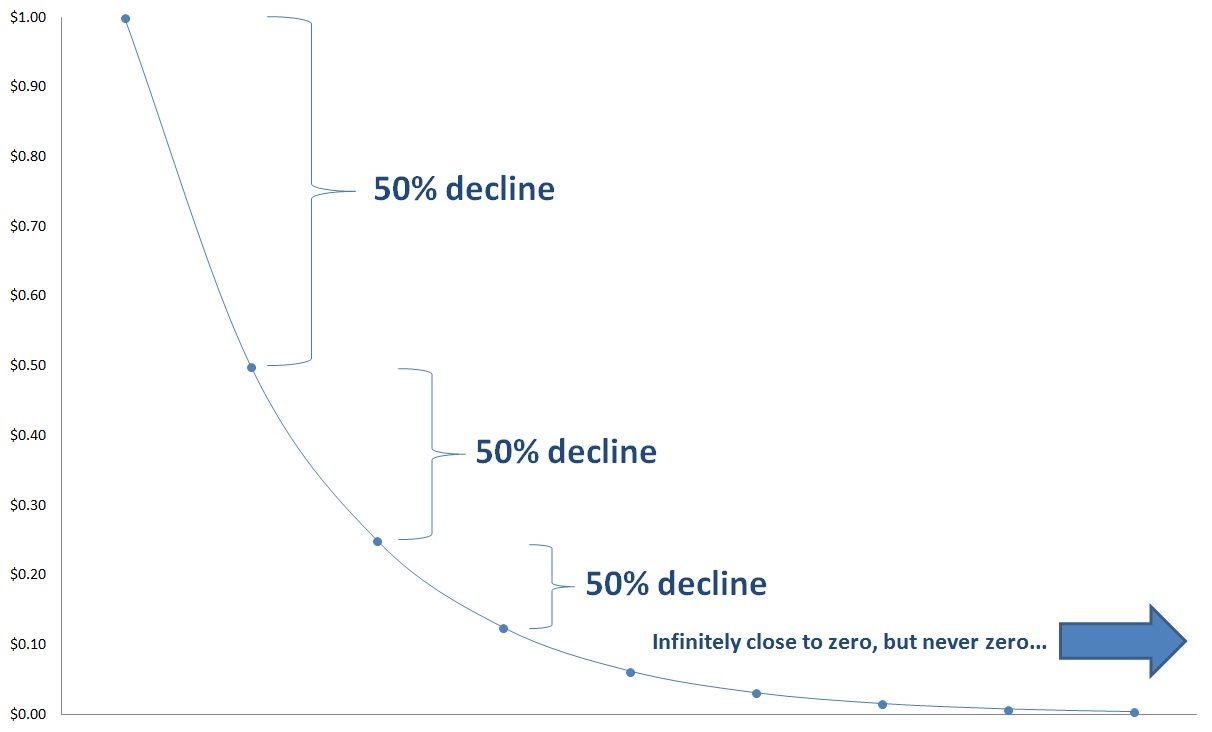 Suppose that I have a cryptocurrency asset that is worth $1. If every day, I experience a 50% selloff, my investment will continuously be halved onto eternity. I could take an “impossibly” small number, and yet I can still take half of that number.

Although this concept drives well into the theoretical unknown, I am inclined to believe that bitcoin can never go to zero. I would go so far as to say that bitcoin wouldn’t even come close to zero.

Aside from the zero paradox and the asymptotic value condition — which also benefit commodities like gold and silver — bitcoin is a new dimension of financial investment. Rather than speculating on an asset’s potential value, bitcoin is a virtual “zero-risk” investment on its inherent functionality. That is, bitcoin is “self aware,” for lack of a better phrase.

Unlike every other investment, bitcoin and cryptocurrency assets negate the requirement for a third-party intermediary for financial transactions. Thus, every transaction that occurs through bitcoin’s blockchain technology is 100% verified as unique. No other traditional platform comes close to duplicating the “bitcoin advantage.”

Multiple generations from now, it’s conceivable that all financial markets will integrate the blockchain that bitcoin pioneered. That would make bitcoin the perpetual “next big thing,” the final investment to beat all others.