Patriots Vs. U.S. House (Coup) Impeachment of the POTUS on Stalin’s Birthday

While the U.S. House of Representatives debates a partisan impeachment of the POTUS that is dead on arrival in the Senate, the infamous communist leader from the former Union of Soviet Socialist Republics was born on this day: December 18, 1878. From 1936-1938, Joseph Stalin instigated “The Great Purge,” or “The Great Terror,” and purged the Communist Party to consolidate his dictatorial power. He also purged more than three-quarters of his generals, field commanders, and naval admirals that served in the Red Army. From the 1920s to 1950s, millions of political prisoners in Russia were sent to Siberian gulags where they died from forced labor and execution. The numbers vary depending on the source, but estimates are that Stalin is responsible for the killing of 40 million people and ranks number two vs. Mao Zedong at 60 million and Adolf Hitler with 30 million.

“In this conduct by Congress failing to do its jobs that should be impeached. Today is not a dark day. Today the American People know this: America is great, Washington is broken, and we are taking our country back.” – Rep. Chip Roy, Dec. 18

What do a bureaucratic coup taking place in the United States and dictators of the past have in common? Your inalienable right to the Second Amendment is not for hunting and a secure food pantry, it protects you from tyrannical government overreach and your person or property from criminal threats. It is a little-known fact that the POTUS withdrew the previous administration’s agreement with the supranational United Nations Arms Trade Treaty, which would have impeded upon your right to keep and bear arms.

“I am officially announcing today that the United States will be revoking the effect of America’s signature from this badly misguided treaty, we’re taking our signature back… Under my Administration, we will never surrender American sovereignty to anyone. We will never allow foreign bureaucrats to trample on your Second Amendment freedoms. And that is why my Administration will never ratify the UN Arms Trade Treaty.” – POTUS, Apr. 26

Gun Sales Might Spike as an Inept Capital Hill Desecrates the Constitution… “The laws that forbid the carrying of arms disarm only those who are neither inclined nor determined to commit crimes. Such laws make things worse for the assaulted and better for the assailants; they serve rather to encourage than to prevent homicides, for an unarmed man may be attacked with greater confidence than an armed man.” – Thomas Jefferson via TraderStef, Dec. 2018

You can access a Twitter thread that includes a chronological record of news on gun control since the Democrats took over the House, which originates from the posting of my article noted above. In the meantime, consider the following quotes from the top three murderous dictators:

“If the opposition disarms, well and good. If it refuses to disarm, we shall disarm it ourselves.” – Joseph Stalin

“All political power comes from the barrel of a gun. The communist party must command all the guns, that way, no guns can ever be used to command the party.” – Mao Zedong

“The most foolish mistake we could possibly make would be to allow the subject races to possess arms. History shows that all conquerors who have allowed their subject races to carry arms have prepared their own downfall by so doing. Indeed, I would go so far as to say that the supply of arms to the underdogs is a sine qua non for the overthrow of any sovereignty. So let us not have any native militia or native police. German troops alone will bear the sole responsibility for the maintenance of law and order throughout the occupied Russian territories and a system of military strong-points must be evolved to cover the entire occupied country.” – Adolf Hitler

The most interesting news items on guns and gun control that caught my eye last week is from the state of Virginia. As of Dec. 17, 2019, 88 counties across Virginia made themselves a “Second Amendment sanctuary county” or passed other resolutions for protection from their state government, which is threatening to pass draconian gun control and confiscation laws, as well as deploying the National Guard to enforce any gun legislation that municipalities and sheriffs refuse to comply with.

UVA constitutional law professor describes rise in sanctuaries as ‘act of political resistance’… “There is some room for local police departments and local officers to use their discretion with the laws, and that was the same thing with sanctuary cities in terms of immigration policy.” – 10News, Nov. 20

Virginia Democrats float prosecution and National Guard deployment if police do not enforce gun control… “Legal firearm owners in the state, however, joined with their Sheriffs to form Second Amendment sanctuary counties, which declare the authorities in these municipalities uphold the Second Amendment in the face of any gun control measure passed by Richmond… Virginia Democratic officials, however, says local law enforcement supporting these resolutions will face consequences if they do not carry out any law the state Legislature passes.” – Washington Examiner, Dec. 11

“We understand and respect the passion people feel for the U.S. Constitution and 2nd Amendment rights. We will not speculate about the possible use of the National Guard.” – Virginia. National Guard, Dec. 13

While Virginia lawmakers are taking steps to pass gun control legislation making most guns in the state illegal, Tazewell County formed an official active militia as per the Second Amendment. A crowd of 200 onlookers that gathered for the hearing cheered loudly when it passed with unanimous support. A second resolution will remove funding from any law enforcement department that infringes on residents’ right to keep and bear arms. If the state tries to remove a sheriff from their elected office when refusing to enforce an unjust law, those officials will face a lawful citizen militia. The county’s new ordinance also allows for concealed weapon training for any residents that can lawfully own a firearm.

There are roughly 22,000 gun laws on the books in the U.S. and folks behind the recent push to penalize law-abiding citizens do not seem to understand that confiscation is a dictatorial act and criminals have no interest in respecting any laws. At least 2.5 million times per year a “good guy” with a gun saves lives and/or protects property. Choosing not to arm yourself is your business. However, what will you do if your family is victimized by home invasion or at two o’clock in the morning when your home is broken into? If you live in a rural area, or even a big city, it can take up to 45 minutes for police to arrive on scene. Maybe knife control will be the next democratic socialists’ bandwagon. Europe and England’s solution to gun crime does not belong in the United States, as the stabbing crime wave in London is primarily due to the immigration influx and extreme gun control laws.

Several People Stabbed At Oregon Wells Fargo… “The ultra-liberal city has seen several knife-related incidents in recent years, including the now-infamous Portland train attack in 2017, where a man fatally stabbed two people and injured another after they confronted him for allegedly shouting racist comments. – Zerohedge, Dec. 18

You can keep track of what is happening with gun laws across the country by visiting GunRightsWatch. If you want to feel safe while having a meal away from home, consider visiting a restaurant that openly arms its employees. One establishment that has gotten some media attention is Shooters Grille in Rifle, Colorado.

Armed and ready to feed you: Shooters Grill in Rifle serves up barbecue with a gun on the side… “At Shooters Grill, in Rifle, the award-winning barbecue comes with a gun on the side. The restaurant’s wait staff, while serving brisket and cornbread, wears holstered — and loaded — sidearms. The fact that both the food and the servers pack heat has made the eatery famous around the world, drawing diners from overseas and vacationers who drive in from Canada.” – Denver Post, Jun. 2018 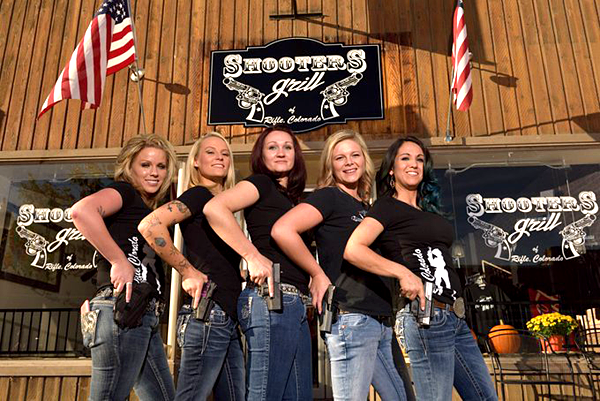 Lauren Boebert is the owner of Shooters Grille and has had enough of the political state of affairs in Colorado, Washington D.C., and gun control rhetoric coming from democratic politicos. She is running for Congress to put the likes of AOC back in their safe spaces. 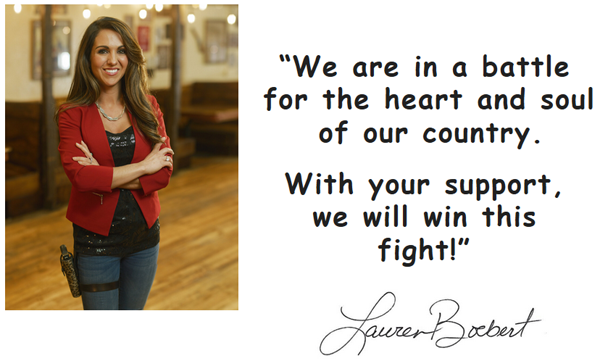 Patriots vs. U.S. House (Coup) Impeachment of the POTUS on Stalin’s Birthday

Patriots vs. U.S. House (Coup) Impeachment of the POTUS on Stalin’s Birthday