As both market and economic pressures build, many investors have sought safe-haven assets. An increasing number are diving into cryptocurrencies, as the rising bitcoin price suggests. However, nothing beats out physical precious metals for the ultimate in financial protection. But while gold gets most of the attention, what investors should really focus on are platinum prices.

At time of writing, gold is performing relatively well, holding at $1,350. But since early May of this year, platinum prices have tanked, barely treading above the critical $800 level. Although support is strong here, this technical robustness also presents a risk: if platinum’s spot price breaks decisively below $800, we could see further pain.

Virtually everyone instinctively knows that platinum is much rarer than gold. So why have platinum prices not reflected this obvious supply and demand picture?

Much of the explanation rests with industrial and economic realities. Unlike gold, platinum has never exclusively held the domain of safe-haven asset. Instead, as modernization progressed, manufacturers found industrial uses for platinum, particularly for catalytic converters in automobiles. With prices so low, that industrial use is returning since the alternative palladium has skyrocketed in value.

Additionally, the ongoing U.S.-China trade war isn’t helping matters. If the tit-for-tat tariffs persist, global economic demand will decline. Since platinum is more tied in with economic concerns than monetary ones, the precious metal’s market value has subsequently eroded.

Platinum Prices Likely for a Comeback

On the technical charts, I noticed two interesting elements regarding platinum prices. First, gold substantially exceeded platinum’s market value in 2015. The following year, this gold-platinum ratio charted a descending broadening wedge pattern before breaking out to the upside. 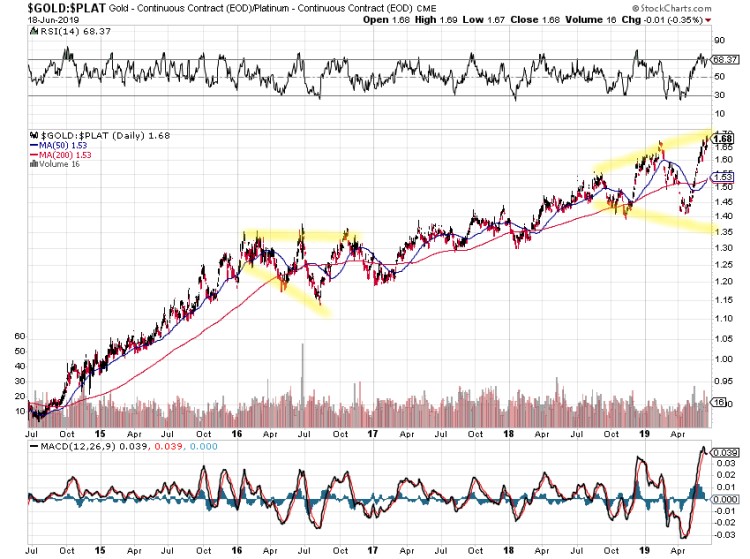 Second, the ratio recently hit a peak. However, it did so at the tail end of another broadening wedge pattern, this time a descending wedge. I believe the technical indicators are telling us that this anomalous relationship is extremely stretched.

In other words, we should expect a return to equilibrium. But before that balancing act, platinum will likely experience its own dramatic rally.

That’s not to say that the gold market will crumble. Indeed, with so many macro-headwinds weighing on the Dow Jones and the U.S. dollar, gold is probably a safe bet. But it’s increasingly looking like platinum will soon shine again.

After all, it’s so much rarer than gold. The markets may not efficiently price in this reality all the time, but it can’t ignore it indefinitely.