If you have been hiding under a rock for the last few years, a nationalist revolution is taking place in many countries across the globe. Here is classic Nigel Farage from Dec. 2016, schooling the European Parliament on BREXIT, NATO, and the return of democratic nation states.

It is time to revisit a bit of history. Following the devastation of WW2, the European continent faced a massive rebuilding of its infrastructure and economy in order to survive and shore up its nation-state’s security. An enormous amount of aid was necessary to re-establish industries and produce food, as well as provide protection from potential communist expansion across the continent. Post-WW2, the U.S. was the only economic powerhouse that could provide the resources and assist with expediting such a large task. Secretary of State George Marshall initiated what is known as the Marshall Plan.

“Industrial and residential centers in England, France, Germany, Italy, Poland, Belgium and elsewhere lay in ruins. Much of Europe was on the brink of famine as agricultural production had been disrupted by war. Transportation infrastructure was in shambles. The only major power in the world that was not significantly damaged was the United States. From 1945 through 1947, the United States was already assisting European economic recovery with direct financial aid, and military assistance to Greece and Turkey. The newly formed United Nations was providing humanitarian assistance. In January 1947, U. S. President Harry Truman appointed George Marshall, the architect of victory during WWII, to be Secretary of State. Writing in his diary on January 8, 1947, Truman said, ‘Marshall is the greatest man of World War II. He managed to get along with Roosevelt, the Congress, Churchill, the Navy and the Joint Chiefs of Staff and he made a grand record in China. When I asked him to [be] my special envoy to China, he merely said, ‘Yes, Mr. President I’ll go.’ No argument only patriotic action. And if any man was entitled to balk and ask for a rest, he was. We’ll have a real State Department now.’ In just a few months, State Department leadership under Marshall with expertise provided by George Kennan, William Clayton and others crafted the Marshall Plan concept, which George Marshall shared with the world in a speech on June 5, 1947 at Harvard. Officially known as the European Recovery Program (ERP), the Marshall Plan was intended to rebuild the economies and spirits of western Europe, primarily. Marshall was convinced the key to restoration of political stability lay in the revitalization of national economies.”

Here is a brief synopsis of how NATO came into existence.

Western Europe did not only require economic assistance, but also democratic stability in the face of political unrest across the European continent. An ongoing civil war in Greece and tensions over the Turkish Straits Crisis with the Soviet Union led President Truman to provide additional aid and military support. A Soviet-sponsored coup in Czechoslovakia resulted in a communist regime sitting on the border of Germany. In Italy, the communist party made significant gains amongst the voting base. Germany was an ongoing concern because its governance after WW2 remained in dispute. In 1948, the Soviet Union challenged the West by blockading West Berlin, which was under U.S., British, and French control and surrounded by Soviet-controlled East Germany. Also known as the Berlin Blockade, it brought the U.S. and Soviet Union to the brink of war. An immense airlift of supplies into the city prevented outright confrontation. 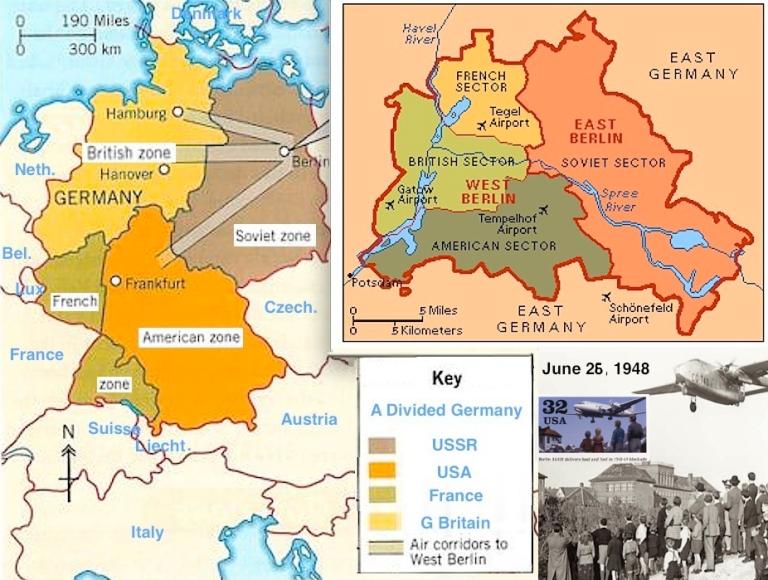 The U.S. became wary that Western Europe might buckle under pressure from the Soviets and be appeased to negotiate security concerns, so the Truman Administration put a European-American military alliance on the table to bolster European security. Great Britain, France, Belgium, the Netherlands, and Luxembourg signed the Brussels Treaty in March 1948. The treaty provided a collective defense: if any one of its nations was attacked, the others were bound to help defend it. In May of 1948, U.S. Republican Senator Arthur H. Vandenburg proposed a security treaty with Western Europe outside of the United Nations Security Council where the Soviet Union held a veto power. The Vandenburg Resolution passed, and negotiations began on the formation of the North Atlantic Treaty Organization.

Western Europe wanted a guarantee that the U.S. would intervene in the event of any attack, but a hindrance to any outright guarantee is that the power to declare war rests in the hands of Congress and the U.S. Constitution. Other issues included the scope of military aid and restriction to membership. Expanding NATO to include the countries of the North Atlantic, including Canada, Iceland, Denmark, Norway, Ireland, and Portugal were eventually agreed upon and acted as a “land bridge” across the Atlantic Ocean for connectivity.

NATO was the first peacetime military alliance the U.S. joined outside of the Western hemisphere, and it was signed on April 4, 1949. Initial membership included the U.S., Canada, Belgium, Denmark, France, Iceland, Italy, Luxemburg, Netherlands, Norway, Portugal, and the U.K. “An attack against one was to be considered an attack against all.” The treaty did not include any conflict that arose in colonial territories. Requests were made by its membership for U.S. military aid, so in October 1949, the Mutual Defense Assistance Program passed Congress and appropriated $1.4 billion to build out the first Western European defenses.

The Korean War was the first conflict where NATO members were able to centralize the coordination of military forces from its headquarters in Brussels, Belgium. The Korean War also stood as an example of communist aggression directed by Moscow, and the U.S. responded by increasing troop presence in Europe to blunt any Soviet aggression. In 1952, NATO added Greece and Turkey to the membership, and in 1955, the Federal Republic of Germany (West Germany) was added. Seeing the growing strength of NATO, the Soviet Union retaliated with their own alliance, known as the Warsaw Treaty Organization, and at that time, it included the Soviet Union, Albania, Poland, Czechoslovakia, Hungary, Bulgaria, Romania, and the German Democratic Republic (East Germany).

NATO placed all of Western Europe under the U.S. “nuclear umbrella,” and one of NATO’s first military doctrines that developed out of the Cold War was “massive retaliation” (aka Mutually Assured Destruction (MAD)). If any member is attacked by nuclear weapons, the United States would respond in kind on a large-scale. MAD has assured global peace for over a half-century, with the exception of low-intensity warfare. NATO remains the largest “peacetime” military alliance in the world.

NATO has evolved since its inception due to geopolitics. Here is the latest map. 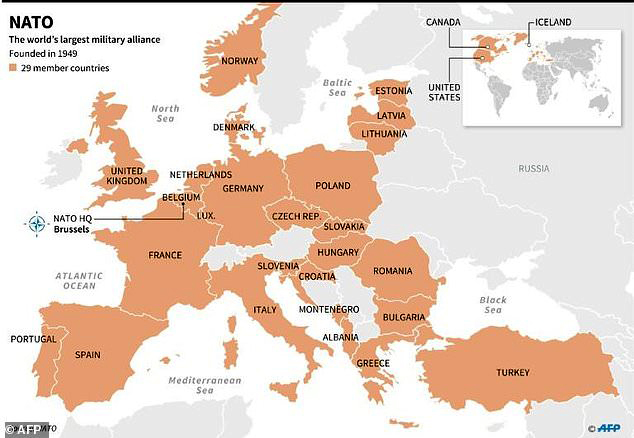 Of course, do not forget the Berlin Wall and its fall. It was built by the German Democratic Republic (GDR, East Germany) as ordered by the Soviet Union beginning in August 1961. The wall cut off West Berlin from almost all of East Germany and East Berlin until it came down beginning in November 1989 due to President Ronald Reagan’s foreign policy of peace through strength. 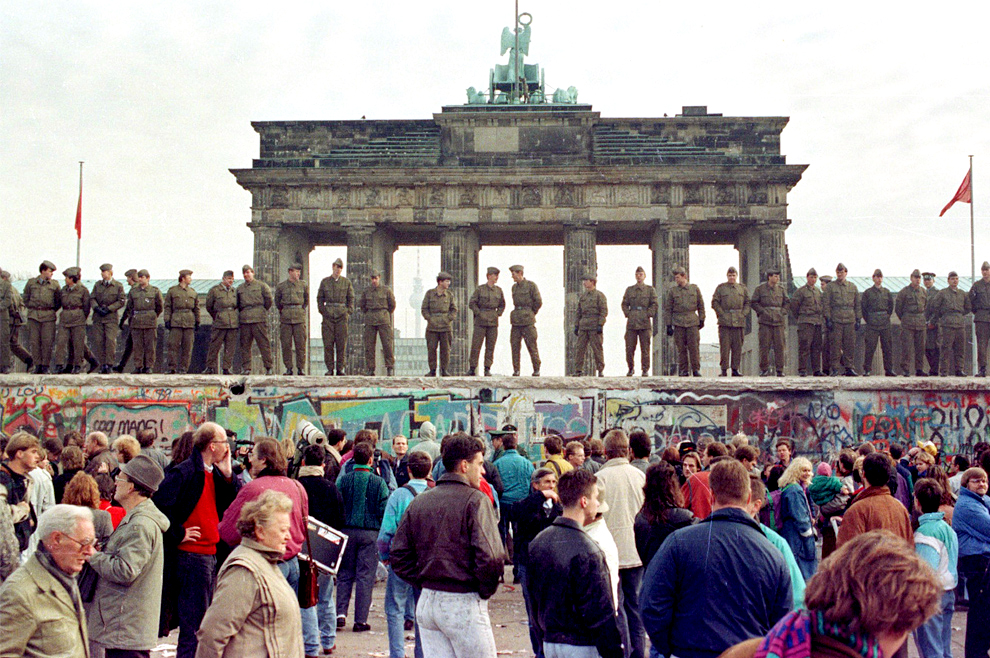 When the POTUS is ridiculed for public demands that NATO membership meet their financial obligations in support of the alliance, consider the fact that the U.S. is being treated as a welfare provider and contributes almost three quarters of NATO’s overall defense spending. Fair is fair. In an era of free or fair trade dissonance, it is unlikely that the whiners will grasp their financial hypocrisy. If the U.S. is chided for being the police officers of the world, our allies must share a cost burden they agreed to so that the U.S. can pull back from the forefront, reduce its footprint, and focus on the domestic issues that must be addressed, instead of continuous meetings about meetings.

Trump, Merkel clash at NATO summit… “US President Donald Trump traded barbs with German Chancellor Angela Merkel at a tense NATO summit Wednesday after he accused Berlin of being ‘captive’ to Russia and demanded it immediately step up defense spending.” – Daily Mail, Jul. 11 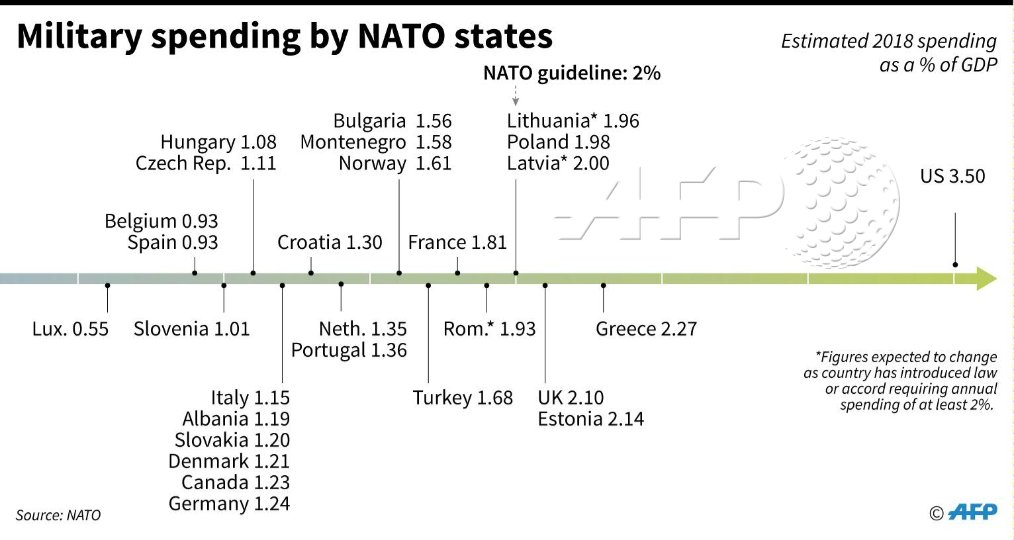 “Trump dressing down globalists is the best thing you will see in ages.” – Paul Joseph Watson, Jul. 11

Long live the better, stronger NATO of the Trump era… “NATO was the foundation of the West’s victory in the Cold War. The leadership team of President Ronald Reagan, British Prime Minister Margaret Thatcher and Pope John Paul II was vital to maintaining the moral clarity which would eventually lead to the breaching of the Berlin Wall on Nov. 9, 1989, and the eventual collapse of both the USSR and the Warsaw Pact.” – The Hill, Jul. 11

Money U.S. overpays for Europe defense should be used to rebuild our country – ABC Washington, Jul. 11